The discussion this week in college football has been centered on the teams themselves as the initial playoff rankings were released and the big-time matchups this weekend are the centerpiece as the calendar turns to November. Since we at Pro Football Focus grade every player on every play of every game, we are best suited to inform you of something unique about each team. Thus, as we give one final look at last week by outlining an interesting observation pulled from PFF’s wealth of college data, our Top 25 Observations series focuses this week on the team’s from the PFF Top 25 and something unique about their season thus far.

They currently boast two of the top three receivers in yards per route run (Jaylen Waddle – 4.97 and Jerry Jeudy – 4.39). Only Amari Cooper in 2014 approached those ranks and numbers and they’ve never had two receivers in the top 20. From a team perspective, the Crimson Tide have generated 64 explosive plays, third most in the FBS, on, amazingly, only 153 receptions. To give some perspective, Ohio State is second with 67 explosive plays, but on 250 receptions.

We knew the Tigers would have a dominating defensive line coming into 2018 and that narrative has been completely on point. The Tigers are generating pressure on 46% of their total passing plays – tops in the nation. 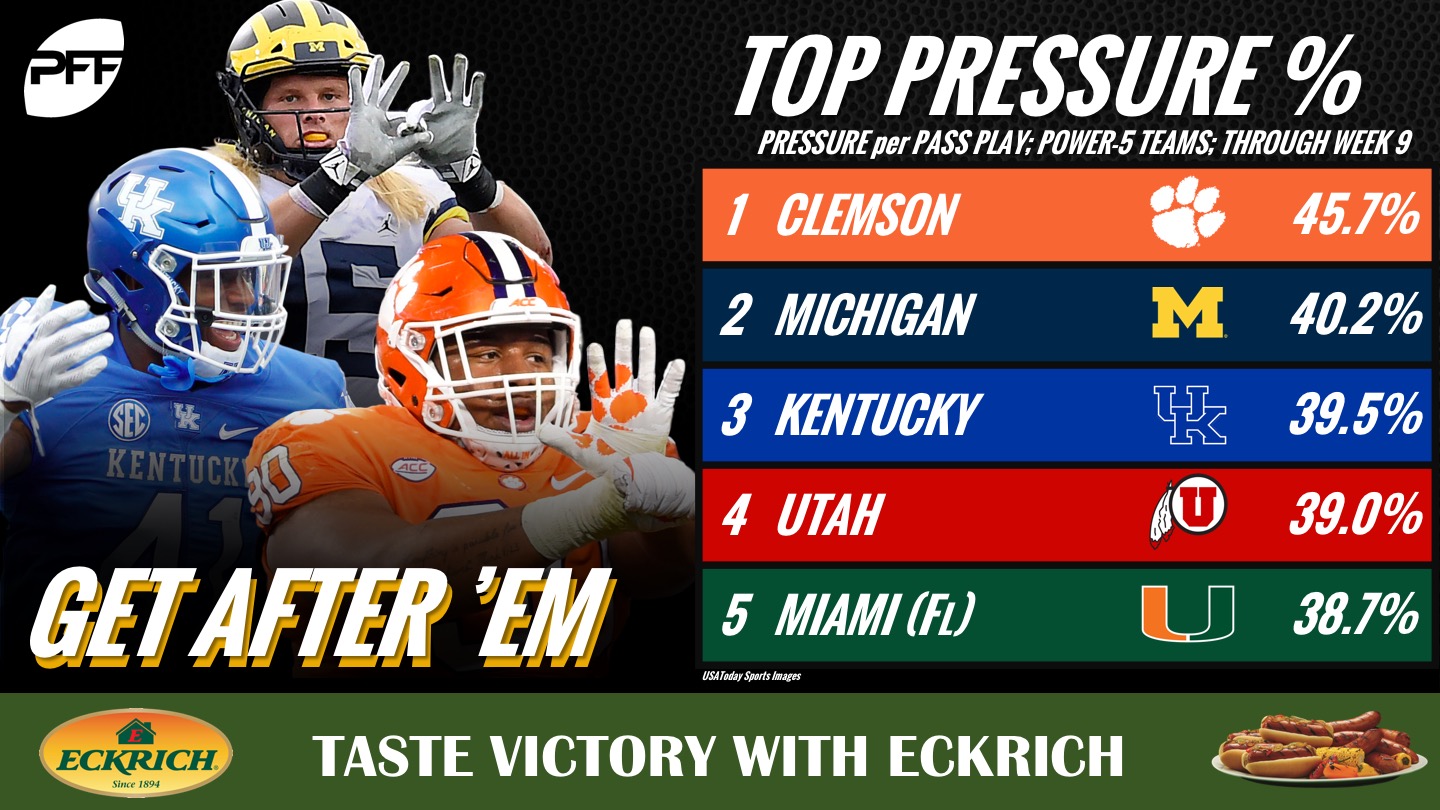 While the Fighting Irish’s offense didn’t take off until Ian Book was inserted in the lineup, their defense has consistently performed. They are seventh in the FBS in stops (a solo tackle that constitutes a loss for the offense) with 233, eight in overall defensive grade, and 16th in coverage grade.

We have discussed the Bulldogs’ lack of a pass-rush, but thankfully for them, they have one of the top secondaries in college football, led by cornerback Deandre Baker (91.4). Their opponents are fully aware of this as well, as Georgia’s average depth of passing target against is the second lowest in the FBS behind Washington. In addition, they have forced an incompletion on 16.4% of targets – third most in the FBS – and missed the second fewest tackles in the passing game.

As dynamic as Kyler Murray (94.3) has been, he has been helped by one of the better, and possibly best, pass-blocking offensive lines and backs in college football. The Sooners’ as a whole are No. 1 in pass-blocking efficiency (93.6) and have allowed a pressure on only 12.1% of pass-block attempts, fewest in the FBS.

The Nittany Lions have lived on the edge this season, as five of their eight games have been decided by seven points or less. One area that may have helped and that must be shored up this weekend against Michigan is drops. The Nittany Lions have the second most drops in the nation with 25 and the 10.4% drop rate of Trace McSorley’s throws is the most nationally.

The most intriguing part of the matchup with Alabama will likely be how the Crimson Tide's now prolific passing attack fares against the current No.1 team in the FBS in passer rating against. The Tigers have allowed the lowest passer rating, 53.8, while also being tied for the national lead in interceptions with 14.

Lead by their defense, Michigan is third in passer rating against (59.8) and allowed the fourth-fewest yards in coverage with playing more Cover-1 (53%) than any other team in the nation.

Dwayne Haskins (81.7) has changed the dynamic of the Buckeyes’ offense in 2018. However, just as much as Haskins' ability to throw, and throw accurately, has changed that dynamic, it’s the ability of their receivers to make plays with the ball in their hands that has changed this season. The Buckeyes have the sixth-most screen attempts (61) and lead the nation in yards after the catch. In fact, their 1,657 yards after the catch are more than 56 teams in the FBS have total receiving yards.

The Knights are not afraid to push the ball down the field. Their average depth of target is the ninth highest in the FBS and the percentage of passes past the first-down marker (60%) is the fifth highest. Impressively, though, the Knights, and primarily McKenzie Melton (81.8), only have two turnover-worthy plays on the season.

Auburn is the exact opposite of UCF above them. Their average depth of target is the fourth-lowest in the FBS and only 38.4% of their passes go past the sticks. Given this very short passing game, they have the third-highest percentage of yards that come after the catch (67%).

The Hawkeyes has distributed the ball relatively evenly among three different backs – Toren Young (66.3), Ivory Kelly-Martin (64.2) and Mekhi Sargent (66.1). Each of those backs gets an opportunity to run outside zone, as Iowa runs the outside zone scheme the fourth-highest percentage, 38%, of any team in the FBS.

Two weeks ago, we highlighted three members of the Bulldogs’ secondary and that unit continues to lead them. Their 66.4 passer rating when targeted is the fifth lowest in the FBS and they also are tied for first with 14 interceptions.

Driven by senior Brett Rypien (89.7), the Boise State passing attack has not been afraid to push the ball down the field. The Broncos have the seventh-most deep passing (20-plus air yards) and are tied for the most big-time throws with Alabama (22).

The Utes have the eighth-fewest turnovers (eight) and are 114th in the FBS in deep passing attempts, giving credit to the ‘stay ahead of the sticks and don't beat yourself' mantra. In addition, they are also 114th in a much better regard: They have only allowed 40 tackles for loss or no gain, the 17th-fewest in the FBS.

We know the Badgers’ strength is their running game and the numbers back that up. They are currently tied for third in the FBS with 34% of their running plays resulting in a first down or touchdown. In addition, led by Jonathan Taylor, they are tops as a team in the nation in total rushing yards after contact.

The Huskies can flat out cover. Their coverage grade is third overall and they are second best in the FBS in yards per catch allowed (9.2). Teams know this as well, as much like Georgia above, the average depth of target against the Huskies is the lowest in the FBS.

The Bulldogs lead the FBS in the percentage of power run concepts (36%). They have also been fundamentally solid against the run defensively, as they are tied for the second-fewest missed tackles in the run game.

Given the presence of our eighth-highest grade receiver and deep threat, JJ Arcega-Whiteside (85.9), the Cardinal get a majority of their passing yards through the air as opposed to after the catch. In fact, their air yards percentage of 71.7% is the third-highest in the FBS and highest among non-triple option teams.

Houston's 62 attempts over 20 yards are the fourth-highest in the FBS. One reason for this is the amount of play-action they employ. The Cougars have run almost double the number of play-action passes (145) compared to the FBS average (75).

Often during this season for the Longhorns, especially in a go-to spot, QB Sam Ehrlinger (89.4) puts one up for his receivers, particularly Collin Johnson (80.4). For the Longhorns’ sake, their receivers have done a great job coming down with those attempts. Overall, the Horns have the seventh-most contested catches in the FBS (25).

In a recent press conference, head coach Mike Leach gave his thoughts on balance and how the focus should be getting your best players the ball in space, no matter how you do that. Leach and his Washington State offense do that and do it very quickly. Their average depth of passing target is 128th in the FBS and they throw short of the first-down marker on 54.3% of their attempts (11th-most).

In order to compete in the back-to-back tough games, they have this week against Notre Dame and next week against Iowa, the Wildcats are going to have to protect Clayton Thorson better and Thorson himself be more accurate. The Wildcats have allowed the 16th-most total pressures (118) and, thus, have the seventh-most off-target incompletions thrown (54).

Much like Washington State above, the Boilermakers get the ball out quick to their playmakers while mixing in the deep ball. They have attempted the 12th-most screen passes and 54.5% of their targets have been short of the sticks (10th-most), but they’ve also attempted the 18th-most deep passes. What it all has translated into, though, is explosive plays in the passing game. Jeff Brohm’s offense has the sixth-highest total of explosive plays in the FBS (61).

The Wildcats go into their big game this weekend against Georgia with literally quite a few tricks up their sleeve. Kentucky has run 35 what we deem trick plays, 10th-most in the FBS. In addition, they have used an unbalanced line on 87 plays, sixth-most in the FBS.