Trailing 20-17 in the final five minutes of the fourth quarter, Tennessee Titans quarterback Marcus Mariota capped off a 12-play, 68-yard drive with a seven-yard touchdown pass to running back DeMarco Murray to pull off the 24-20 win over the Cincinnati Bengals.

Though his performance wasn’t without flaw, Mariota put forth his best effort when it mattered most. He completed 25-of-44 passes for 264 yards and one touchdown against one interception.

On the ground, second-year thumper Derrick Henry led the team with 52 rushing yards on 11 carries. Murray ranked second behind Henry in yards, but he was responsible for all three of the Titans’ touchdowns (two rushing).

Bengals wide receivers A.J. Green and Brandon LaFell both put together all-star performances through the air, as the two combined for 210 receiving yard and both of quarterback Andy Dalton's touchdowns. A majority of Green’s yards came on his 70-yard touchdown grab in the fourth quarter. With that, we give you our PFF exclusive takeaways from the contest for each team.

Mariota had an up-and-down day. His interception thrown straight to Darqueze Dennard was inexcusable, but he rebounded well. Mariota's numbers could have been even better if it wasn't for four drops from his receivers and multiple other contested catches that fell to the turf.

Davis had a day he'd like to forget. His fumble at the goalline was luckily rendered moot, but very well could have been the difference in the game. The rookie had a drop and only hauled in four of his 10 targets.

Jackson was targeted eight times on the day and only allowed four of those to be hauled in for just a total of 27 yards. He added two pass breakups, showing he can get his hands on the ball, in what was his highest graded game as a pro.

Byard is having a heck of a season, but one missed tackles almost cost the Titans a win. His whiff on A.J. Green was the Titans only missed tackle on the day and Byard's ninth on the season. He added two other crucial pass breakups though and didn't allow a catch on three targets.

The Bengals offensive line had arguably it's best outing of the season and Smith was a big reason why. As a unit, they yielded pressure on only five of QB Andy Dalton's 36 dropbacks, with Smith was responsible for only one of those.

A week after his ejection for fighting, Green showed why he was so dearly missed in the second half against the Jaguars. He hauled in five catches for 115 yards on 36 pass routes for a 3.29 yards per route run average on Sunday.

Billings is starting to make his presence felt against both the run and the pass on the interior of the Bengals defensive line. He had three run stops along with two pressures in 36 total snaps against the Titans.

It got ugly for Shaw, who was flagged on three separate occassions in this one. In coverage, he also managed to allow both his targeted passes to be caught for a total of 25 yards. 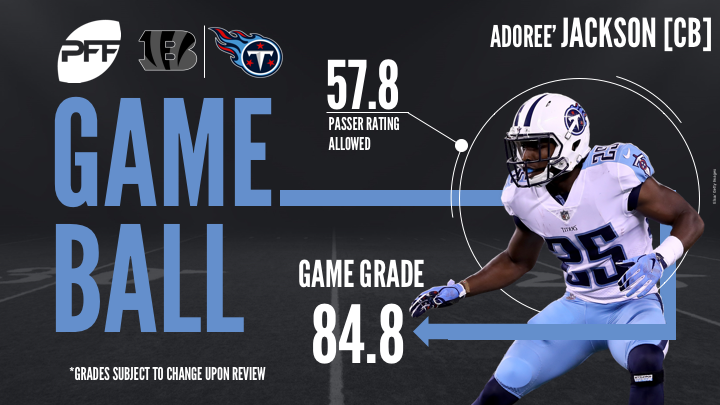