The Philadelphia Eagles defeated the Chicago Bears, 16-15, in the Wild Card round of the playoffs. 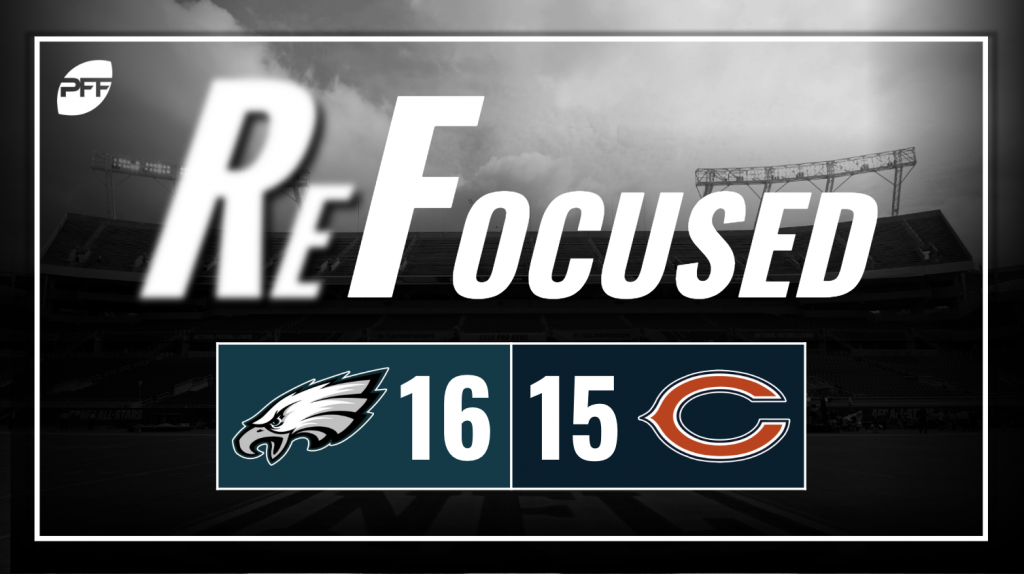 Nigel Bradham was important to the Eagles' defense slowing down the Bears' running game. Bradham recorded seven tackles and most of which where stops that put the Bears' offense behind the sticks. Bradham was also used a lot to prevent Mitchell Trubisky from running wild from the pocket, forcing the Bears signal-caller to make plays in the air. The Eagles' defensive scheme was to compress the pocket and not allow Trubisky to move the ball with his legs.

The Eagles' secondary held up for the most part against the Bears. Outside of Avonte Maddox, the Philly secondary locked down their position and didn't allow easy completions.

After trading field goals early on, Nick Foles found Dallas Goedert for the game's first touchdown and then led a game-winning drive to advance the Eagles to the next round of the postseason. Foles rebounded from a first-half interception in Bears territory and played a solid game afterwards, going 25-of-40 for 266 yards and two touchdowns.

Alshon Jeffery had another big game and was Foles' favorite target, catching six passes for 82 yards. Golden Tate hauled in the game-winning touchdown and ended with five catches for 46 yards. It was tough sledding on the ground against the No. 1 defense in the NFL, as Darren Sproles and Wendall Smallwood combined for 41 yards.

Trubsiky got away with multiple passes that could have and really should have been intercepted. However, he settled down in the second half and moved the ball for the Bears offense and put them in position for a win if not for the Field goal by Cody Parkey hitting both the upright and crossbar.

Allen Robinson dominated the Eagles' secondary with double moves down the sideline for multiple deep plays, catching 10 passes for 143 yards. Robinson scored the only Bears touchdown and made the big play on the last drive to put the Bears in field goal range.

Akiem Hicks was a menace on the Bears. He almost single-handedly disrupted the Eagles' ground attack, and Chicago owned the line of scrimmage, limiting the Eagles to 1.8 yards per rush on 23 attempts.

Foles kept his postseason magic going, leading the Eagles to a game-winning drive. It didn’t come easy, as the Bears' defense did all they could to make it tough on the defending Super Bowl champs, limiting them to under two yards per carry and notching two interceptions.

In the end, the game came down to a field goal. Overall, the Bears put themselves in position to win the game thanks to defensive plays in the first half and the fact that the Eagles failed to pick a couple of passes off that hit the defenders in the hands.