The fourth full week of preseason action has come and gone, so we at PFF have put together our fourth NFL Team of the Week to highlight outstanding performances at every position across the league. 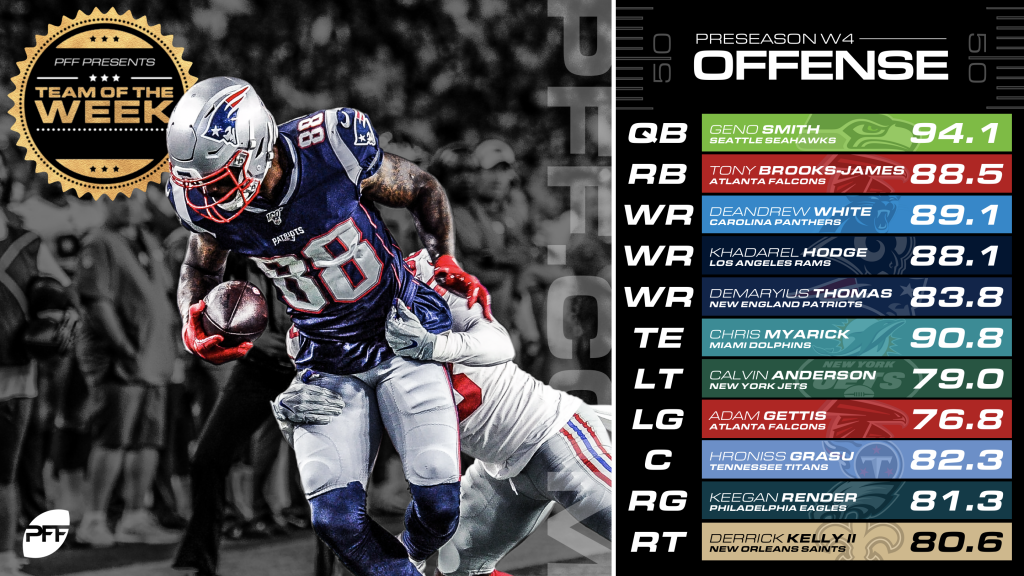 Smith dropped back to pass just 10 times for the Seahawks this week, going four-for-seven with a pair of touchdowns and the other two throws going for first downs. He attempted three throws 20-plus yards downfield, completing two for 80 yards and a touchdown.

An undrafted free agent out of Oregon this year, Brooks-James saw his biggest workload of the summer and didn’t disappoint. Racking up 137 yards on 15 carries, the former Duck saw 6.0 of his 9.1 yards per carry come after contact and forced two missed tackles as a runner.

White saw more targets in the preseason finale than he saw in the previous three encounters combined, and he made the most of those opportunities,  racking up 94 receiving yards on the night. He didn’t drop a pass and saw all four of his receptions result in a first down, adding a forced missed tackle to cap the performance.

In a rare move for the final preseason game, the Patriots gave plenty of work to receivers that they’ll hope will be key players for them in 2019. Thomas was targeted eight times, picking up seven receptions and two touchdowns. Another two of his receptions went for first downs, and he didn’t drop any passes.

An undrafted free agent out of Temple, Myarick had seen just two targets through the opening three games, but that changed with six targets coming his way in the preseason finale against the New Orleans Saints. He caught all six, with five of those going for a first down as he racked up 78 yards in the game.

Undrafted out of Texas this year, Anderson saw more snaps against the Eagles than he had seen throughout preseason heading into the game. From 39 pass-blocking snaps, he allowed just one hurry, with no sacks or hits allowed.

Playing his highest snap count of the preseason so far, Gettis was on the field for 67 snaps. He allowed just one quarterback hurry from 34 pass-blocking snaps, finishing the preseason with three total pressures allowed on 102 snaps in pass protection.

A former third-round draft pick out of Oregon, Grasu produced his best performance of the preseason against his previous employer, the Chicago Bears. He allowed a sack, but that was the lone pressure he allowed from 25 pass-blocking snaps and he produced an 89.7 PFF run-blocking grade.

Kelly has enjoyed a really nice preseason, with PFF overall grades above 70.0 in all four encounters. This was his best performance as a run blocker, registering a PFF run-blocking grade of 91.2, while producing a 100.0 pass-blocking efficiency rating with no sacks, hits or hurries allowed from 24 pass-blocking snaps. 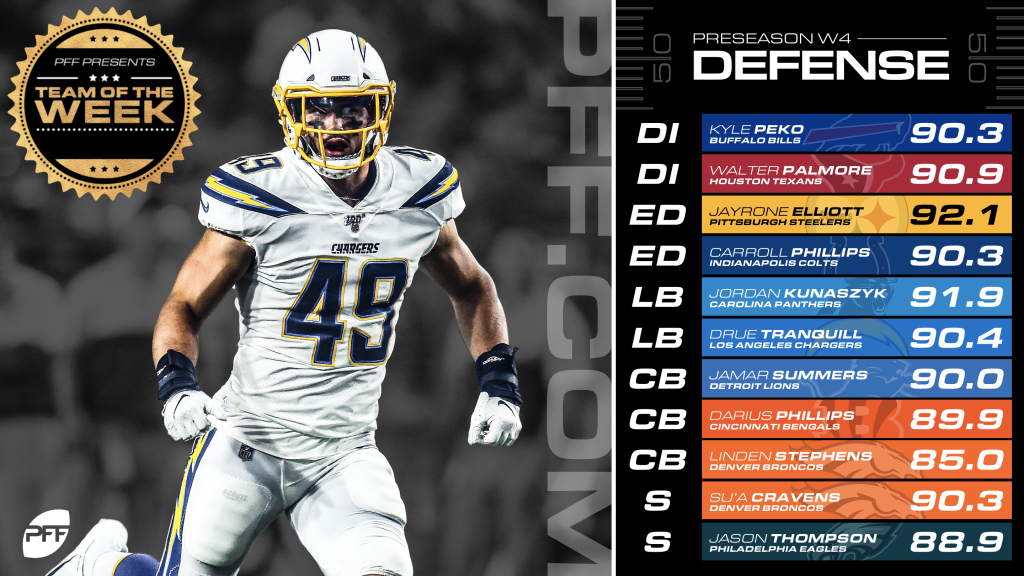 The undrafted free agent out of Missouri had struggled throughout the preseason, but he saved his best for last in the game against the Rams. He registered two hits and a hurry from 16 pass-rushing snaps, but it was against the run where he really stood out with three tackles resulting in a defensive stop.

Heading into his sixth season, Elliott had an impressive performance in the preseason finale, with a sack and a forced fumble from 15 pass-rushing snaps. He saw 33 snaps overall, finishing the game with two of his three tackles resulting in a defensive stop.

An undrafted free agent back in 2017, Carroll Phillips saw a preseason high in snaps in the final game. On the field for 31 pass-rushing snaps, he racked up two sacks, a hit and a hurry, and he forced a fumble on one of those sacks.

An undrafted free agent out of Cal, Kunaszyk produced his second impressive performance of the preseason on Thursday night against the Pittsburgh Steelers. He was the primary defender in coverage on five targets, but he allowed just 25 yards on three receptions and came away with an interception.

We’ve seen some big plays from the fourth-round draft pick out of Notre Dame this preseason, and the final week of the preseason was no different. He finished the game with a forced fumble and three tackles resulting in a defensive stop, taking him to nine such tackles in August.

Summers capped off his second preseason with a big performance for the Lions against the Cleveland Browns. On the field for 20 coverage snaps, he didn’t allow a single reception and came away with an interception himself, finishing the game having allowed an NFL passer rating of 0.0 on throws into his coverage.

Making a repeat appearance on the PFF Team of the Week, Phillips once again enjoyed an impressive outing in the Bengals' preseason finale against the Colts. Targeted twice in coverage, the lone reception he allowed went for zero yards and he came up with an interception, finishing the game having allowed an NFL passer rating of 16.7 on throws into his coverage.

Stephens ended his second preseason campaign on a high despite being heavily targeted by the Arizona Cardinals offense. He saw seven passes thrown into his coverage, allowing just 11 yards on three receptions and finishing the game with two tackles resulting in a defensive stop.

The former second-round draft pick produced his best showing of the preseason in the final game after starting and seeing 39 snaps on defense. Making a huge impact on one play, in particular, he forced a fumble and recovered it himself.

Playing for his second team of the preseason, Thompson made sure to finish the summer on a high with a big performance against the Jets. That was thanks in no small part to a forced fumble after a reception by tight end Eric Tomlinson.

After seeing one field goal blocked, Slye rebounded with an impressive 59-yard kick that he drilled down the middle.

O’Donnell averaged 43.6 net yards per punt over five punts in the Bears' game against the Tennessee Titans. Of those five punts, three landed inside the opposing 20-yard line, and he averaged 4.77 seconds of hang-time per punt.

Making as big an impact as you can as a returner, Murphy took his lone punt return back 79 yards for a touchdown.

Gilbert saw 21 snaps on special teams this week and made his biggest impact with a blocked field goal on 4th-and-6 with 10:17 left in the first quarter.