Special teams are an important, but often-overlooked aspect of football.  At PFF, we’re uniquely positioned to study this aspect of the game, grading every player at each facet of every game.  In 2016, we developed an algorithm to rate special teams, taking into account how grades in each facet contribute to winning.  Below are these ratings after Week 9 of the 2018 season.

[Editor's Note: These rankings vary from our 0-100 Special Teams grades, which are agnostic to the overall value with respect to winning football games during a season.] 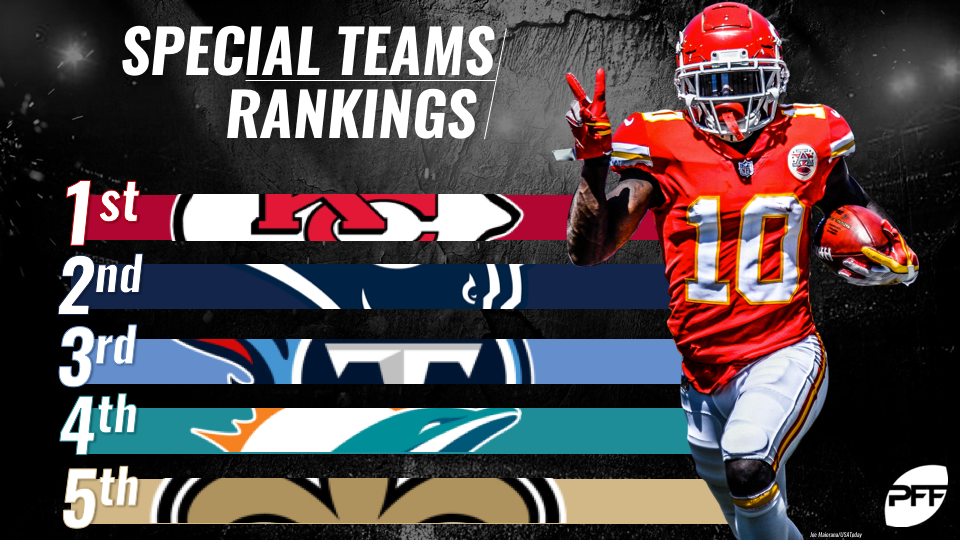 Dave Toub gets to look more like a head coaching prospect every year, and for good reason.  Both Tremon Smith and Tyreek Hill are top-five-graded return men through the season’s first nine weeks.

What can be said about Dave Toub is also true about John Fassel.  Even with injuries to their top return man and placekicker, the Rams remain one of the league’s best groups, with JoJo Natson the sixth-highest-graded return man so far this year.

Dane Cruikshank, Daren Bates, and David Fluellen have combined for 11 solo special teams tackles without a missed tackle so far this year.

Jakeem Grant is a game changer, with two return touchdowns and almost 700 return yards through the season’s first nine games.

There’s no surprise that three of the league’s best four teams have special teams units in the top five.  The Saints have Taysom Hill, who in addition to his work offensively, has three solo special teams tackles and 269 total kickoff return yards so far, adding value in many ways for Sean Payton’s creative bunch.

While he missed a big kick against the Texans, Brandon McManus has been good at limiting field position on kickoffs, allowing an average opponent drive start of the 22.6-yard line.

Michael Palardy is the league’s highest-graded punter so far this season – and by a wide margin.  Graham Gano has also been perfect so far on kick attempts.

Tarik Cohen is one of the league’s most explosive players, averaging 12.4 yards per punt return so far this year.

Matt Prater has been perfect this season from inside of 40 yards, and Jamal Agnew has been great returning kickoffs, averaging 27.8 yards per return.

Punter Rigoberto Sanchez has been the third-best punter in the league in terms of net yardage so far this season, which has helped a personnel-deficient Colts defense overperform their metrics.

While the placekicking continues to be a disaster, Adrian Phillips has eight total special teams tackles with just one missed tackle so far.

Kavon Frazier has been a standout member of the coverage unit, notching seven tackles through nine weeks. Brett Maher has also graded exceptionally well on kickoffs.

Trevor Daniel is third in the league on punts placed inside the 20 (22) and in fair catches forced (13) so far this year.

Rookie sensation Michael Dickson is the fourth-highest graded punter in the NFL so far this season.

Johnny Townsend is not making anyone forget about Marquette King, as he is our second-lowest graded punter through the season’s first nine weeks.

Josh Lambo has done a good job pinning opponents on kickoffs for one of the league’s best (supposed) defenses.  The average starting field position for opponents has been the 22.5-yard line, second among qualifiers.

Aldrick Rosas has been the most-effective kickoff specialist in the NFL through nine weeks, with an average starting opponent field position of the 22.2-yard line.

This is a rarity for Baltimore, but in a slide that has seen them go from a contender in the AFC to a losing record, we’ve seen even Justin Tucker taken briefly as a hostage, with an extra point against the Saints keeping them from forcing OT in their biggest game since the 2012 Super Bowl.

Washington has been terrible at returns, averaging 5.7 yards per punt return and 17.1 yards per kickoff return so far this year.

In what is usually a strength for the Patriots is surprisingly weak this year.  One place to look is Ryan Allen, who is 32nd in our punting grades so far this year.

Buffalo is rough in a lot of areas, but for a team that has to punt a lot, it’s not good that Colton Schmidt and Corey Bojorquez are among the lowest-graded player at his position.

Chris Boswell has had an off year, missing seven total kicks, including four extra points.  If he makes the OT field goal in week 1, the Steelers are 6-2 and in the conversation for a bye in the AFC right now.

While he’s rebounded nicely, it’s hard to forget Mason Crosby’s five-miss day in Detroit, a loss that will more-than-likely hurt the 3-4-1 Packers’ playoff chances in a crowded NFC.

This low rating cannot be attributed to Robbie Gould, who has missed just two kicks all year.

This is pretty low for the Eagles, but four missed field goals and under eight yards per punt return and 20 yards per kickoff return are a bit concerning right now for the birds.

The ever-inconsistent Chandler Catanzaro has both won a game for Tampa Bay with a long field goal against Cleveland in OT, but took away any chance they had to win the Atlanta game with a missed PAT on their first touchdown.

Cleveland’s rating is a full 40% lower than Tampa Bay’s.  Losing on the margin has been a consistent theme in Cleveland, and here’s one glaring example.