Breaking down the AFC Playoff picture

Only eight teams in the AFC have nothing to play for in Week 17, for even the teams guaranteed a playoff berth have better seeding on the line as the regular season comes to a spectacular close.

Without further ado, here’s an updated look at the AFC playoff picture as we march toward an ever-so-important Week 17. 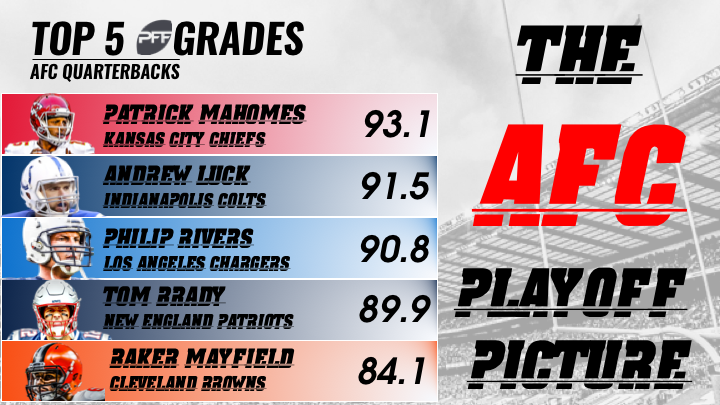 A loss to Oakland, though admittedly unlikely, would cost Patrick Mahomes & Co. home-field advantage throughout the playoffs and possibly the team’s first-round bye. A Chiefs loss and a Los Angeles Chargers win over the Denver Broncos throws Kansas City out of the division lead and down to the No. 5 spot.

Mahomes, of course, shouldn’t have a problem pushing his team past the Raiders and eliminating any of the remaining “what ifs” on Sunday. Of the 13 signal-callers Oakland has faced this season, only three have sub-60.0 overall grades against the team’s defense. Mahomes is bound for a field day.

A win for New England secures their first-round bye regardless of how the rest of the AFC shakes out, but a win and a Kansas City loss to Oakland would have Tom Brady & Co. in Foxborough through the Super Bowl (if they win in the playoffs, of course).

Though Brady has earned sub-65.0 overall grades in three of his last four games, he still ranks sixth in overall grade on the year (89.9). Only a fool would count Brady out after a handful of uncharacteristic performances, especially with playoffs looming.

Chris Long’s Nick Foles shrine worked, and Houston was on the losing end of magic. Foles and the Eagles dropped the Texans down to 10-5 with their win in Week 16, putting Houston in a position to possibly lose the AFC South.

If the Jags find a way to take down the Texans in Week 17, the winner of the other AFC South matchup (Indianapolis Colts at Tennessee Titans) will steal the AFC South crown away from Deshaun Watson & Co.

Whether it’s Cody Kessler or Blake Bortles at the helm, the Jags have a fighting chance against Houston for as long as their defense shows up to play. Calais Campbell, Jalen Ramsey, A.J. Bouye, etc. can’t be slept on, with Campbell leading the group as the team’s lone defender with an elite overall grade (90.9).

The Lamar Jackson era in Baltimore has gotten off to an incredible start. The team is just a few insane Mahomes throws away from having gone 6-0 with the former Louisville standout at the helm. With the loss to Kansas City, Jackson and the Ravens are 5-1 in their last six games and a win away from taking the AFC North.

A Ravens loss and Pittsburgh Steelers win in Week 17, however, would push Baltimore out of the playoffs even with all of Jackson’s successes. The Ravens’ run-heavy offense and high-performing defense are more than capable of getting the job done against the Cleveland Browns on Sunday; the team just has to hope Baker Mayfield doesn’t wake up feeling too dangerous.

Mayfield currently ranks ninth in overall grade (80.8) and is coming off an impressive outing against Hue Jackson and the Cincinnati Bengals. Mayfield and the Browns are no longer a doormat, so Jackson and the Ravens can’t treat them like one this week.

The Chargers have secured their playoff berth already, and they're a win and a Kansas City loss away from securing the No. 1 seed in the AFC.

Philip Rivers, who currently ranks fourth in overall grade (90.8), has quietly put together a career year for the Bolts and can cap it off with a big win over Denver in Week 17. Denver’s defense isn’t the ‘No Fly Zone’ it used to be, but Von Miller & Co. will still present problems for Rivers and the Chargers’ offense. But if Rivers has proved anything this season, it’s that he can handle the heat. The veteran signal-caller ranks fifth in passer rating (88.1) and third in yard per attempt (8.0) under pressure.

The playoffs start for Andrew Luck and the Colts this week. It’ll be win or go home for Indy against the Titans on Sunday Night Football. Also, as previously mentioned, a win and a Houston loss would give them the AFC South crown.

Not duo is hotter than Luck and wide receiver T.Y. Hilton coming down the stretch. Of the 310 NFL players with 200-plus offensive snaps in Weeks 11-16, Hilton (91.7) and Luck (90.8) ranks first and second, respectively, in overall grade. The Colts go as they go.

Tennessee is in the same situation as Indianapolis, but they’ll have the advantage of playing at home.

Battling injury for much of the season, Marcus Mariota has had an up-and-down season under center for the Titans. He currently ranks 17th among qualifying signal-callers in overall grade (76.8) and will need to play above his season average to take down Luck and the Colts.

The Steelers’ gut-wrenching loss to New Orleans in Week 16 left much of the team’s fate in the dangerous hands of Mayfield. Even if Pittsburgh pulls off a Week 17 win against Cincinnati, Mayfield and the Browns will have to take down Jackson’s Ravens for the Steelers to sneak into the playoffs. Well, I guess that’s not the only way; a Pittsburgh win and a tie between the Colts and Titans would also get Big Ben & Co. in, but the odds are slim.