Which first-year NFL head coaches are in the best position to succeed in 2021?

With the 2021 NFL regular season nearly underway, all the attention is finally on the players about to step on the field and attempt to win a Super Bowl. But don’t overlook the importance of coaching and the potential impact of first-year head coaches on their franchises.

Seven teams are rolling into the campaign with new head coaches, all of whom are taking on the role for the first time at the NFL level. They appear set up for varying degrees of immediate success, so let’s look at each and where their team is situated.

Given that it’s August, it only makes sense that the hype surrounding the Chargers is at a high point. The Chargers are the champions of August every year, finding their way onto most people’s lists of darkhorse Super Bowl candidates before the wheels inevitably fall off and the team fails to live up to its billing.

On the one hand, you could make the case that “fool me once, shame on you, fool me eight times in a row…” while on the other hand, you can look at the Chargers as a sleeping giant waiting for the right touch to bring them to life.  Brandon Staley is coming to them from a stint as the Los Angeles Rams‘ defensive coordinator, where his defense ranked No. 1 last season.

The Chargers' defense ranked 14th in expected points added (EPA) allowed per play in 2020 but has the talent to be significantly better than that, and the front office bolstered the unit this past offseason. Staley has already shown he can move the needle in terms of a defense, but the most critical thing for Los Angeles being successful is the offense and development of quarterback Justin Herbert.

Herbert was fantastic as a rookie, finishing the season as PFF’s No. 1-graded quarterback under pressure, but the Chargers still overhauled his offensive line to ensure they aren’t relying on that volatile facet of play going forward. Los Angeles will have its sights set on the playoffs in Year 1 of Staley’s tenure.

It might seem crazy to expect the team with the No. 1 overall pick in the 2021 NFL Draft to have immediate success, but the Jaguars were never as bad as their record last year, losing an unlikely number of close games. 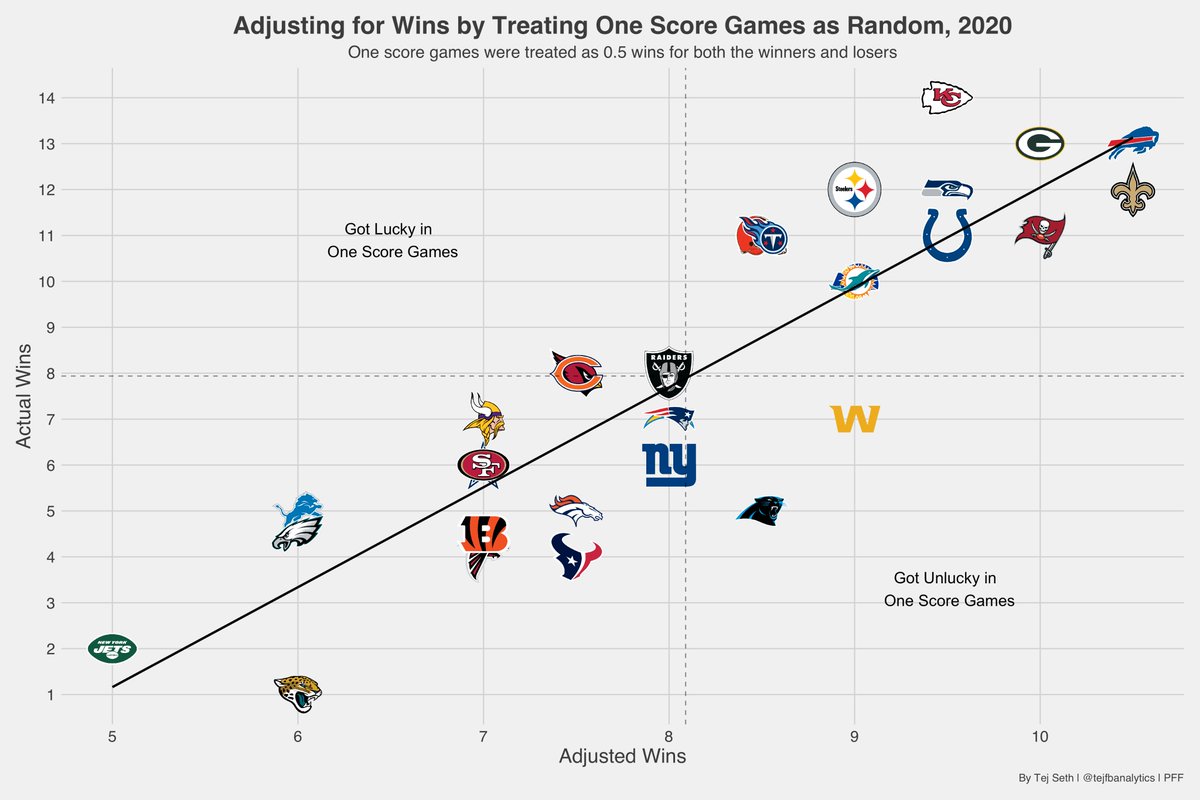 Added to that roster is the best quarterback prospect to enter the league since at least 2012, and arguably as far back as 1998. Trevor Lawrence was nothing but excellent throughout his college career at Clemson, and he now enters an offense that seems intent on causing issues for defenses simply with their personnel on any given snap.

Travis Etienne and Laviska Shenault also boast hybrid potential in terms of positional versatility, and Urban Meyer has a long track record of featuring that type of weapon within his offenses. The consensus seems to be — based on Meyer’s history — that this won’t be a long-term appointment, but there is every chance that it pays dividends a lot quicker than people expect in a weak division.

The Falcons have been a declining force since losing a backbreaking Super Bowl to the Patriots after building an infamous 28-3 lead. Julio Jones being traded to the Tennessee Titans is just another brick taken out of the foundation of what was once one of the NFL's best teams.

Arthur Smith comes over from that Titans team after being at the helm of one of the league’s most efficient offenses with Ryan Tannehill as the starting quarterback. In fact, since Tannehill came into the starting lineup in Week 7 of the 2019 season, the Titans lead the league in EPA per play on offense, with the Kansas City Chiefs coming in second.

Tannehill is evidently a more talented quarterback than he showed with the Miami Dolphins, but the new system he played in doubtlessly aided that revelation. Now, Matt Ryan hopes to enjoy a similar boost. Ryan has shown he is receptive to a boost in efficiency if the offensive system allows it, and the last time he had that chance was that Super Bowl season.

The Falcons' offense could, and perhaps should, be very good, but their defense could be bad enough to hold them back from being a real contender.

The Jets have been making a lot of good moves over the past couple of years, but their fortunes are going to go as new quarterback Zach Wilson goes. He is a less sure bet than Lawrence, even if there are people who believe he possesses greater NFL upside.

The biggest hole on the Jets' roster is at cornerback, where there is little in the way of experience or high draft status. New York's cornerback room is one of the weakest position groups in the NFL on paper, but Robert Saleh has a system with a good track record of getting the most out of those players.

We're just two seasons removed from the 49ers entering the regular season with similar (though less severe) concerns over their group of corners, only to find that group anything but a weakness. The Jets don’t look to have the same chance of surprise success, but if Saleh’s scheme can get passable play from that unit, the Jets could be a solid side.

The Detroit Lions aren’t trying to compete this season. Their strategy has been obviously focused on a multi-year rebuild from the get-go, and nothing proved that more than their willingness to trade away long-time starting quarterback Matthew Stafford and take on board Jared Goff (and his contract) to secure additional first-round draft picks. The Lions may be vastly improved in certain areas, but the project is only half complete, which will limit how far they can go in Year 1.

The Eagles have hedged on 2021, loading up on resources for next offseason when they will likely select their quarterback of the future — that is, unless Jalen Hurts surprises everyone with his opportunity as a starter.

The overall roster still has a lot of talent, even if much of it is heading to the twilight of its peak. If Hurts does surprise, the Eagles could still contend for the NFC East, but if he can’t improve dramatically on a 56.2 overall PFF grade from last year, the team will be struggling. The team's talent likely prevents it from being truly terrible, however.

It’s difficult to see any pattern or direction to what Houston is doing right now, and that extends to a quarterback situation in limbo with Deshaun Watson wanting out at the same time as he is facing numerous accusations and lawsuits. The Texans are clear favorites for the No. 1 overall pick in the 2022 NFL Draft.