In their second test in the SEC East, the Georgia Bulldogs came away from Missouri with a 43-29 win. Georgia is deep in offensive playmakers, and they were all on display in this one.

This Georgia feature is brought to you Eckrich, the Official Smoked Sausage of the Georgia Bulldogs.

WR Riley Ridley led the way with a 76.8 receiving grade behind five catches for 87 yards and a touchdown. WR Jeremiah Hollman had a 60-plus yard score for the second straight week while WR Mecole Hardman had a 54-yard touchdown on a nifty post route himself. 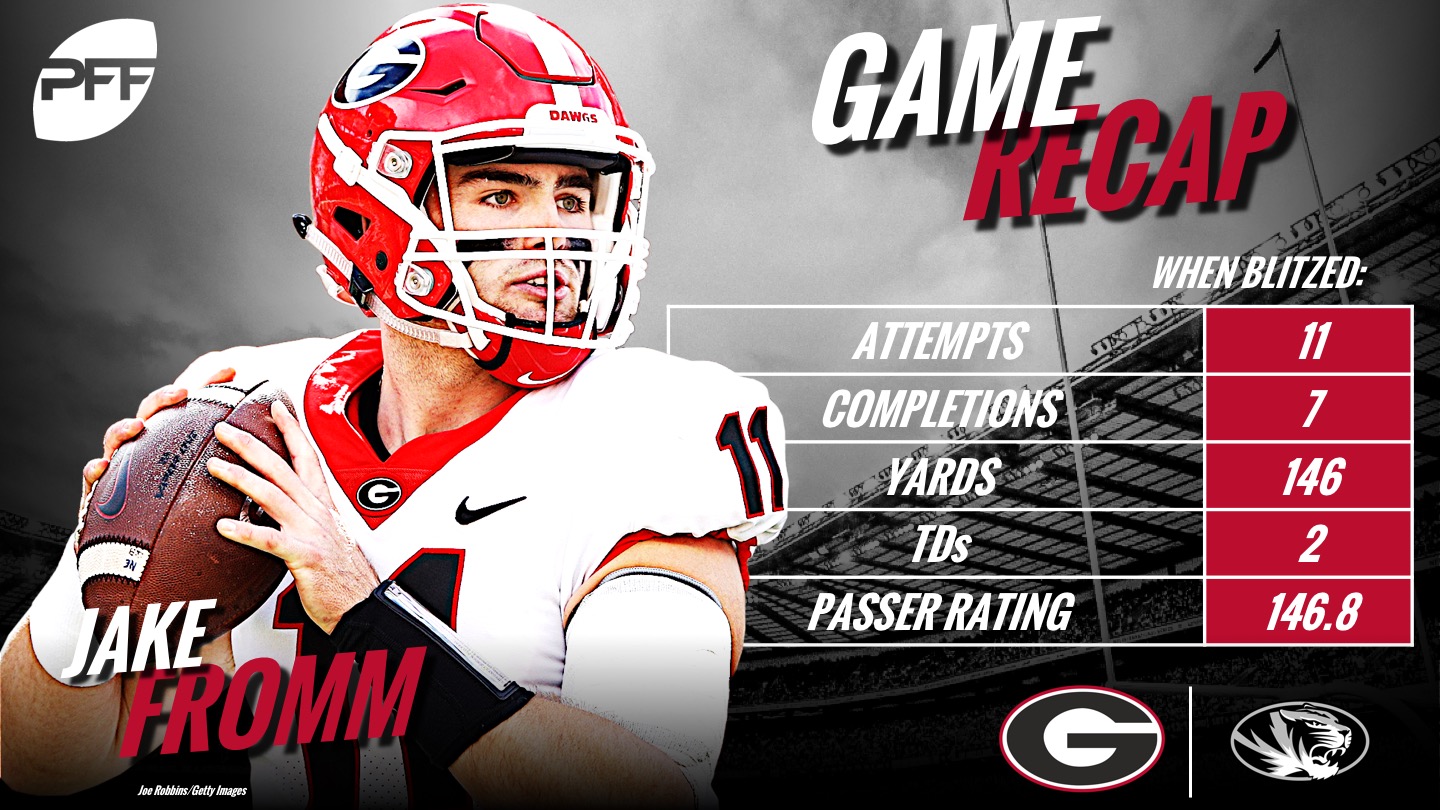 Quarterback Jake Fromm was had his best all-around game of the season, grading at 77.7 overall while completing five of his 10 attempts at 10-plus yards. Fromm was particularly good against the blitz, grading at 89.2 while going 7-for-11 for 146 yards and two touchdowns. The starting offensive line deserves credit for allowing only two pressures as a unit, and Fromm was only under pressure on five of his 23 dropbacks on the afternoon. 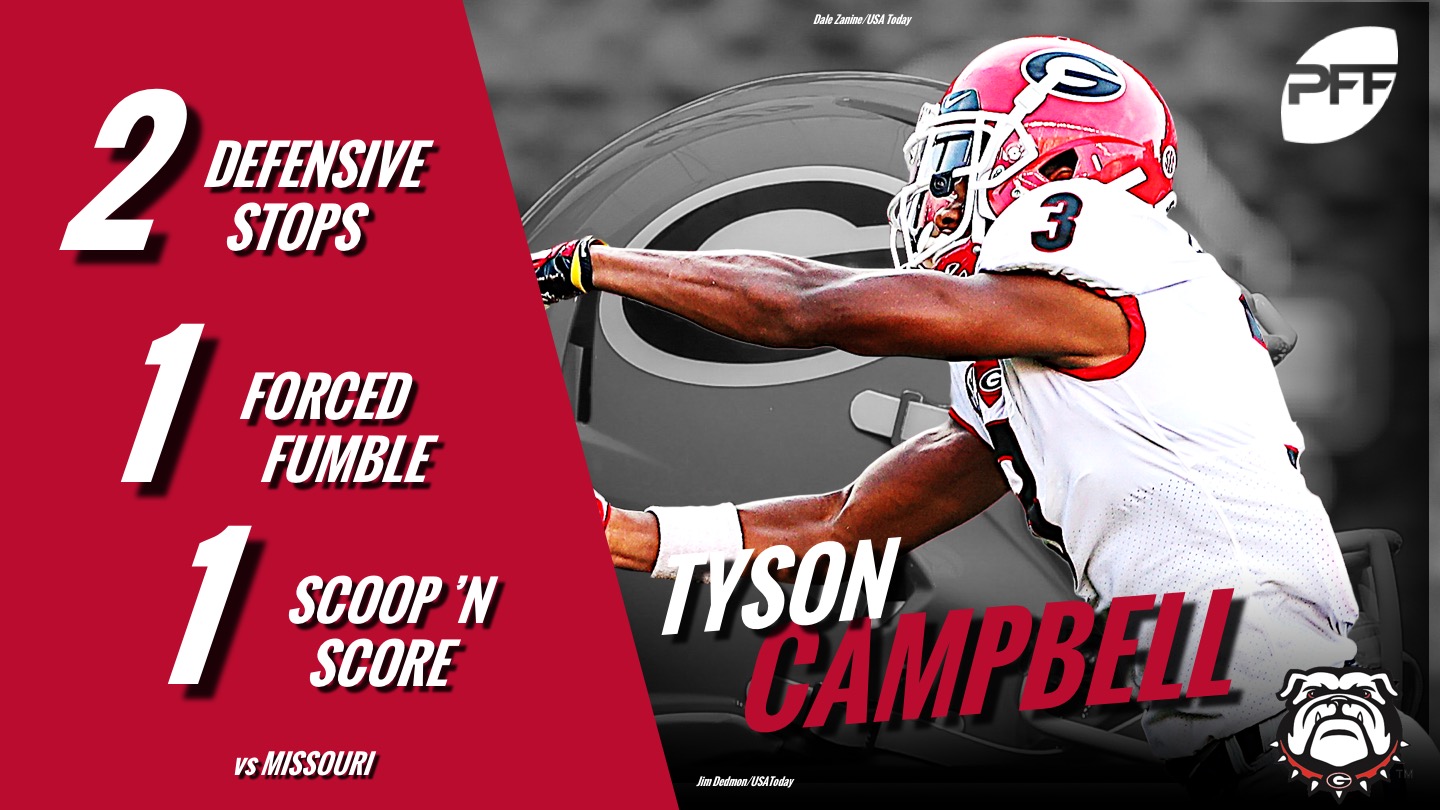 Defensively, new stars shone brightly for the Bulldogs, as cornerback Tyson Campbell put up the game’s highest grade at 94.4 overall (albeit on just 18 snaps) and his forced fumble and return for a touchdown was one of the biggest plays of the game. Edge defender D’Andre Walker set career-highs for snaps (65) and pressures (eight) as he picked up two sacks, three QB hits and three hurries on his 37 rushes. 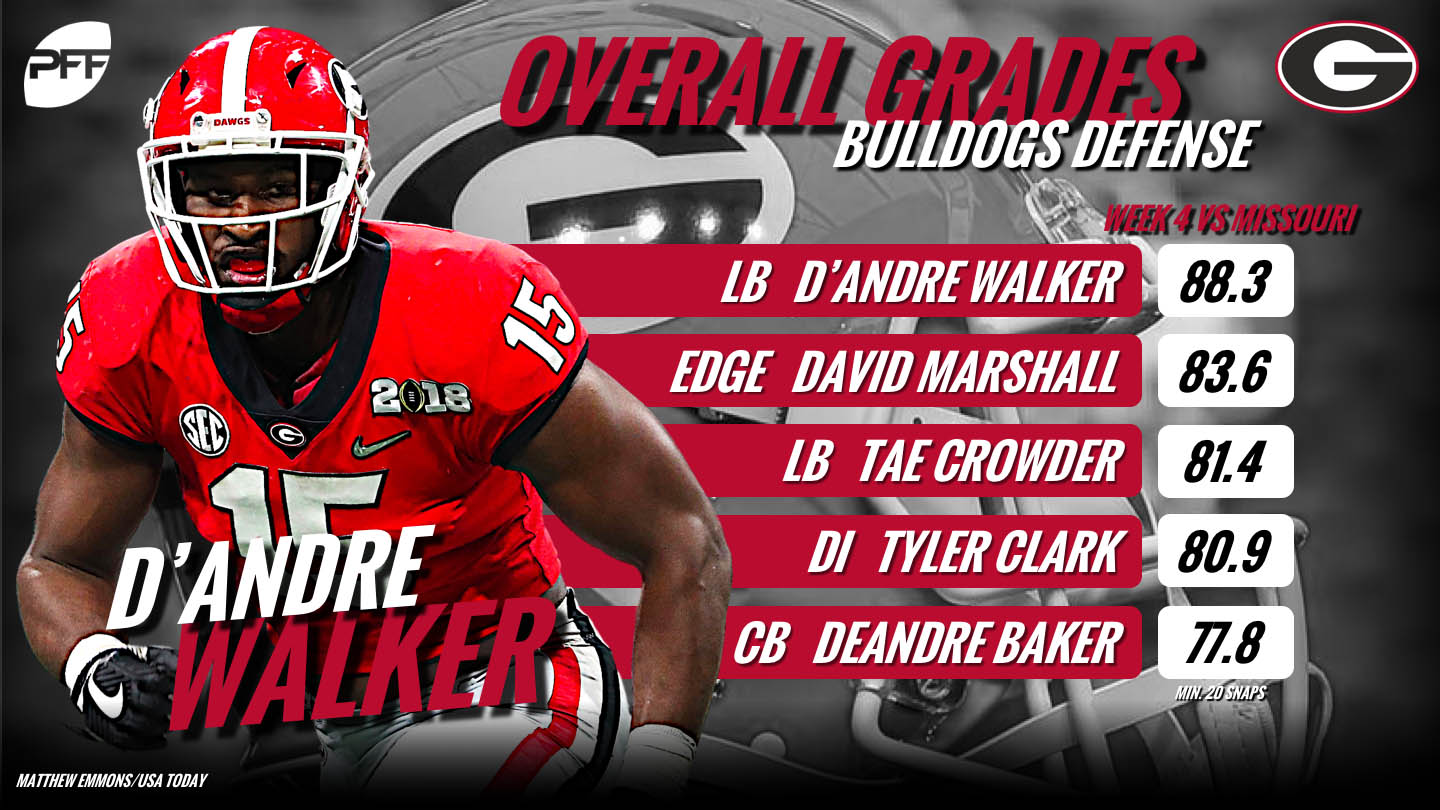 Up front, DT Tyler Clark had another strong performance against the run, improving his team-high 90.2 grade in the run game this season.

On the other side, all eyes were on Missouri QB Drew Lock who landed right around average on the PFF grading scale at 64.1 overall. He was unable to stretch the field in true Missouri fashion, going 0-for-1 on his only attempt at 20-plus yards while going 3-for-8 in the intermediate (10-19-yard) range. Lock struggled under pressure, grading at 52.3 on those 21 dropbacks.

Lock’s best throw came on a tight-window two-point conversion in which his NFL arm was on display.

Star receiver Emanuel Hall played through injury and he didn’t have a catch on his two targets. TE Albert Okwuegbunam was Lock’s top target, hauling in nine catches for 84 yards and six first downs.

Defensively, there were few stars for Missouri as DE Tre Williams led the team with only two pressures. DE Nate Anderson led the team with five stops while showing well against the run and DT Walker Palmore had a pressure and two stops.