It’s Week 4 of the college football season, which means Big Ten play is set to begin. With the exception of Iowa, the conference’s top teams all posted huge wins last week, leaving several teams still undefeated and reigniting the debate over who the best team is in the Big Ten.

Here’s a look at the teams most likely to be vying for the conference championship come December, and where they stand currently in each of their divisions:

The Wolverines were tested in the first quarter this past weekend, as Colorado raced out to a 21-7 lead early. The Michigan defense dominated afterward other than giving up a 70-yard TD pass due to a coverage bust to start the second half, outscoring Colorado 38-7 the rest of the way. Michigan is our top overall-graded team in the country thus far, thanks in large part to the second-best defensive grade (Alabama is the only team to grade higher) and best run defense in the country.

The offense clicked in Weeks 1 and 2 against weak opponents, but struggled early against the Buffaloes. In order for the unit to progress, it must get better run blocking on the left side of the line from LT Grant Newsome and LGs Ben Braden and Ben Bredeson, and QB Wilton Speight must continue to use his legs effectively to buy time for his receivers to get open when the pocket breaks down.

While the defense has arguably been the best in the country through three weeks, the scary reality is it has missed multiple key pieces thus far, including Jourdan Lewis, our highest-graded CB from 2015, and DE Taco Charlton, who led all returning DEs in pass rush productivity last year and left early with an injury in week one. In their absence the obscene depth has played well, in particular freshman DE Rashan Gary, who has registered eight total pressures on just 55 pass rushes to go with eight total defensive stops.

The Wolverines could have Lewis and Charlton back as early as this week, and NT Bryan Mone could return as early as next week’s game against Wisconsin. Lewis’ return is especially key, as his ability to shut down half the field will not only help prevent the coverage busts that occurred last Saturday, but allow defensive coordinator Don Brown to become even more aggressive with his defensive play-calling. While Michigan’s next two opponents are two of the bigger names in the conference, Penn State this week is completely outmatched offensively at the line of scrimmage, and Wisconsin’s limited power offense is not a good matchup against Michigan’s defense. Expect two big statement wins to start the conference season for Michigan.

The Oklahoma Sooners were expected to make it back to this year’s playoff, but will be bowling elsewhere after getting thrashed by a young and talented Buckeye team this past weekend. Despite the lack of experience, Ohio State has a plethora of young playmakers who have emerged, including RB Mike Weber, WR Noah Brown and RB/WR Curtis Samuel, who has posted over 500 yards from scrimmage in three games and belongs in the Heisman trophy discussion. Against Oklahoma, the two RBs and QB J.T. Barrett averaged 6.4 yards per carry while rushing for 299 yards, all of this despite LT Jamarco Jones having the highest run blocking grade on the offensive line at just 54.1.

Defensively, the Buckeyes are led by a trio of players in the secondary. S Malik Hooker and CBs Marshon Lattimore and Gareon Conley have combined for six interceptions and two pass breakups through three games, and all have simply looked athletically and instinctually superior to all of their opponents.

The Buckeyes are now in their bye week, and will open big ten play with home games against Rutgers and Indiana before playing a night game in Camp Randall against the Badgers on Oct. 15. Considering Ohio State’s issues on the offensive line, that game is particularly intriguing, and will set the tone for the rest of the season. The same questions posed about Wisconsin’s quality of victory over LSU needs to be brought back again for Ohio State’s win against a now two-loss Oklahoma, but as a whole the Buckeyes look way ahead of schedule, and more than able to challenge Michigan in the west.

The Spartans admittedly were an afterthought coming into the season, as expectations were not particularly high for them after losing numerous top draft picks, including the QB, top WR and the highest drafted offensive lineman in April. That changed after Michigan State’s win this past Saturday in South Bend, as although Notre Dame clearly has some significant issues on both sides of the ball, it’s very apparent that excellent coaching in East Lansing is capable of carrying the Spartans much further than expected.

The stars of Saturday night’s game were WRs R.J. Shelton and Donnie Corley, as they combined for 12 catches on 16 targets for 168 yards and two scores. While 260 yards on the ground looks impressive, take away Gerald Holmes’ 73-yard TD stroll through the parted Red Sea and the Spartans averaged just 3.7 yards per carry on the remaining 51 touches.

The front seven on defense was outstanding, in particular star DT Malik McDowell, who racked up five total pressures and five run stops. The LB corps of Jon Reschke, Chris Grey, Andrew Dowell and Riley Bullough combined for five pressures of their own to go with eight total stops and just one missed tackle. 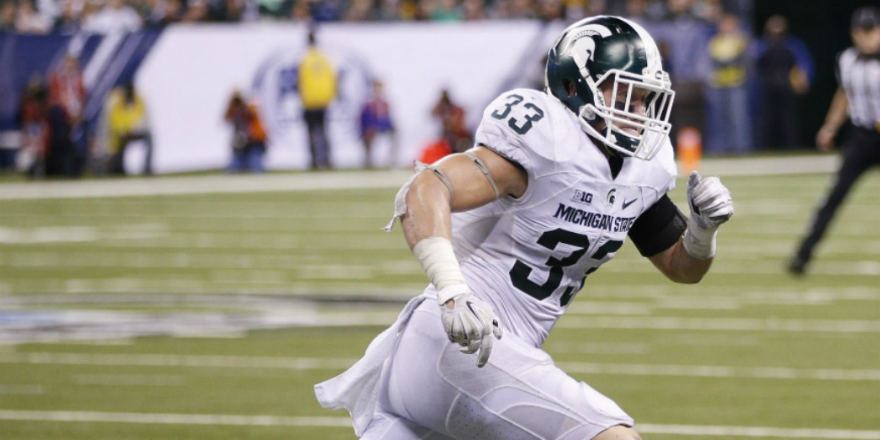 This week’s matchup against the Badgers is just as big a measuring stick game for them as it is for Wisconsin. If the front seven can play as well as it did last week, the Spartans will at worst be in the game until the very end. I expect a low-scoring defensive battle, and the winner will likely win the turnover battle. This sounds cliché, but despite what they accomplished against the Irish this past Saturday, the Spartans don’t have the horses to just run away from the top teams in the conference. They may be capable of beating most teams with strong play at the line of scrimmage and a lack of mistakes, but it’s still hard to see them hanging with the two most talented teams in the west division.

Iowa did itself no favors by scheduling the best team in the FCS for the last decade, and paid the price with a last second loss to North Dakota State this past Saturday. While this surely will knock them out of College Football Playoff contention, they’re still a legitimate contender for the Big Ten crown, and likely still the favorites in the West.

Against North Dakota State, the offense ran just 50 plays, and it was the offense’s inability to run the ball that caused it to be so inept. The backs averaged just 2.3 yards per carry on 23 carries, due in large part to poor blocking from the interior linemen. QB C.J. Beathard was more efficient throwing the ball than his stat-line suggests, as five of his nine incompletions (on 20 throws) consisted of three drops, a throw away and a batted ball at the line of scrimmage. Going forward he needs to be more aggressive, as he attempted just seven throws longer than ten yards through the air from the line of scrimmage, making it easier for North Dakota State to stack the box.

There are certainly positives to be taken from the non-conference schedule, in particular from the offensive perspective the pass blocking, as the line has given up just two sacks and three hits through three games (one hit and no sacks against North Dakota State). On the other side of the ball, the defensive line has been outstanding. Jaleel Johnson, Anthony Nelson and Nathan Bazata have combined for eight sacks, 19 other pressures and 23 defensive stops, while LB Josey Jewell, as expected, leads the front seven with 15 solo tackles. All-everything CB Desmond King has started slowly in coverage with five catches allowed on eight targets and no interceptions or pass break ups to his name just yet, but he has also been excellent against the run, posting 15 solo tackles of his own with four stops and no missed tackles.

With star power at every level of both sides of the ball and a QB leading the Big Ten in adjusted accuracy percentage (76.9 percent), it’s easy to see why Iowa is still expected to compete for the Big Ten West crown despite last week’s setback.

While much of the focus this past weekend was on the performances of the east powers, Nebraska had a win that was every bit as impressive as those of Michigan State and Ohio State. The offensive line did an excellent job of keeping QB Tommy Armstrong clean against the Oregon Ducks (although Armstrong himself did not, as he was charged with two sacks and a hit), as they yielded just two hits and three hurries. The ground game was clicking this past weekend, as on 36 designed rushes by Armstrong and RBs Devine Ozigbo and Terrell Newby, the trio posted 220 yards (6.1 yards per carry) and forced nine missed tackles. The defense struggled to finish plays, as they posted 18 total pressures but just two sacks and no hits, and they missed 13 tackles on the day.

The offense through three weeks owns the eighth-highest grade in the country, and is tops in the Big Ten. Despite the struggles against the Ducks, the defense has actually graded out even better, and currently stands at sixth-best in the country (third in the Big Ten). Senior DE Ross Dzuris is having a breakout season, as he has 12 total pressures (four sacks) and 10 total stops through three games, but the rest of the defensive line has posted just one sack and three hits. The secondary has been outstanding so far with just two TDs yielded to seven INTs (five against Wyoming in week two) and four pass break-ups forced thus far.

While the defensive line certainly needs better production outside of Dzuris, the play of the secondary is extremely encouraging, as the offense is sure to put up points throughout the season, which will put pressure on opponents to pass.

The Badgers are difficult to figure out based on what they’ve done thus far, as they shocked LSU in Week 1 but head into the Big Ten season coming off a very disappointing six-point victory over Georgia State. QB Bart Houston was benched after going 0-6 on throws at least 20 yards through the air from the line of scrimmage, but the Badgers hope they may have found something in Alex Hornibrook, as he was accurate on ten of his eleven passes (two drops and on throw away made him 8-12), and completed all four of his passes at least 10 yards through the air from the line of scrimmage for 91 yards. OLB T.J. Watt produced three hits on pass rushes, but outside of him the rest of the defense tallied just two more pressures, both from OLB Vince Biegel. This has been a theme throughout the early part of the season, as 14 of Wisconsin’s 24 total pressures have cove from the duo.

While the LSU victory looks great in principle because the Tigers were ranked so high coming into the season, the reality is their offense has been a complete disaster so far, and the Badgers were likely the beneficiaries of past reputation as the team that has perennially been one of the SEC’s best is clearly not of that class this year. The unit that has clicked the best thus far for Wisconsin has been the offensive line, led by LT Ryan Ramczyk who legitimately looks like one of the top players in the country at his position thus far. We should learn everything we need to know about the Badgers these next two weeks, as they face the Spartans and Wolverines in back to back games. For now I’m inclined to ignore their high ranking and continue to slot them below Iowa and Nebraska in the west, but they’ll have two chances to prove me wrong in the next 11 days.