While Wisconsin and Ohio State will meet this weekend to determine the winner of the Big Ten, we’re ready to unveil the PFF All-Big Ten team for the regular season. It should come as no surprise, though, that Ohio State (9) had the most selections of any schools in the conference and made up nearly half the team.

Utilizing our play-by-play grades of every player on every play of every game, our All-Big Ten Team takes into account every player's actions on the field on Saturdays while also utilizing our wealth of signature statistics to determine the list. The strength of opponent and consistent play also factor into our selections detailed below. 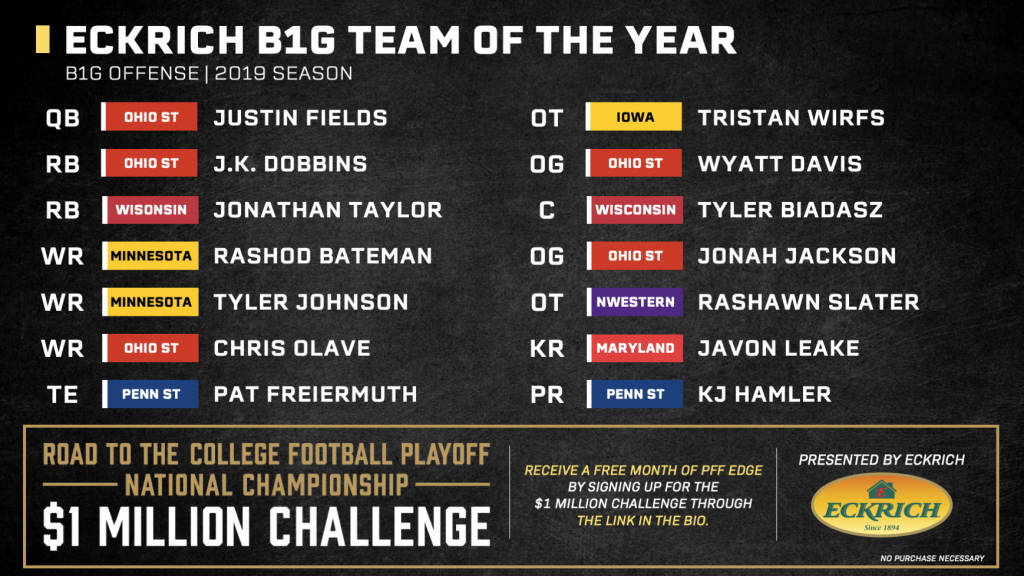 Fields has not only dominated compared to other Big Ten quarterbacks — the sophomore is also the second highest graded signal-caller in the country. His 92.7 passing grade represents a massive leap from last year’s first-round pick Dwayne Haskins (84.9).

After a disappointing sophomore campaign, Dobbins has been better than ever as a junior. He saw his yards after contact average jump from 2.68 last year to 3.84 this year. He also ran for more touchdowns (19) than his first two seasons in Columbus combined (17).

Bateman and Johnson were neck-and-neck production-wise all season long, and both get the nod for the All-Big Ten Team. Bateman was more of the home run threat in the Minnesota offense, averaging 20.5 yards per reception. The sophomore ranked fourth nationally averaging 3.66 yards per route.

Johnson put together an eerily similar statline to what we saw from him in 2018. And he did it more efficiently, as well. After hauling in 78-126 targets last year for 1,161 yards and 12 touchdowns, Johnson needed only 104 targets this year for 75 catches, 1,113 yards and 11 touchdowns.

Olave saw all of 16 targets as a freshman in 2018 before he became the Buckeyes' number one option this season. Of his 41 catches this season, 36 went for either first downs or touchdowns.

Brycen Hopkins may have better raw stats, but the Purdue tight end had serious drop issues (8) and played in an offense that passed 72 times more than anyone else in the Big Ten. Freiermuth, on the other hand, didn’t drop a single pass on 41 catches all season long. He also caught seven touchdowns and broke six tackles on the year.

Wirfs took his game to another level as a junior. He saw both his pass blocking grade (87.8) and run-blocking grade (88.1) improve by leaps and bounds from 2018. He allowed only four pressures in Big-Ten play all season.

In his first season as a full-time starter, Davis didn’t disappoint. At right guard, Davis didn’t allow a single hit or sack all season long. He also paved the way for J.K. Dobbins on the ground with an 82.1 run-blocking grade — a figure that ranked top-10 nationally.

Make that three straight All-Big Ten teams for Biadasz. He not only made the All-Big Ten team this year, though, slotting in on our All-America Team, too. He was a top-five graded center in every season of his career at Wisconsin.

After flipping from right guard to left guard this year, Jackson showed no ill effects en route to a career year. He allowed only nine hurries all season long, and his 78.8 run-blocking grade represented a nice leap from his 70.3 last season.

While Slater got helped out a ton with scheming against Ohio State and Chase Young, the Northwestern tackle held his own all season long. He allowed only five pressures on 355 pass-blocking snaps this season for one of the highest pass-blocking grades in the country (88.2). 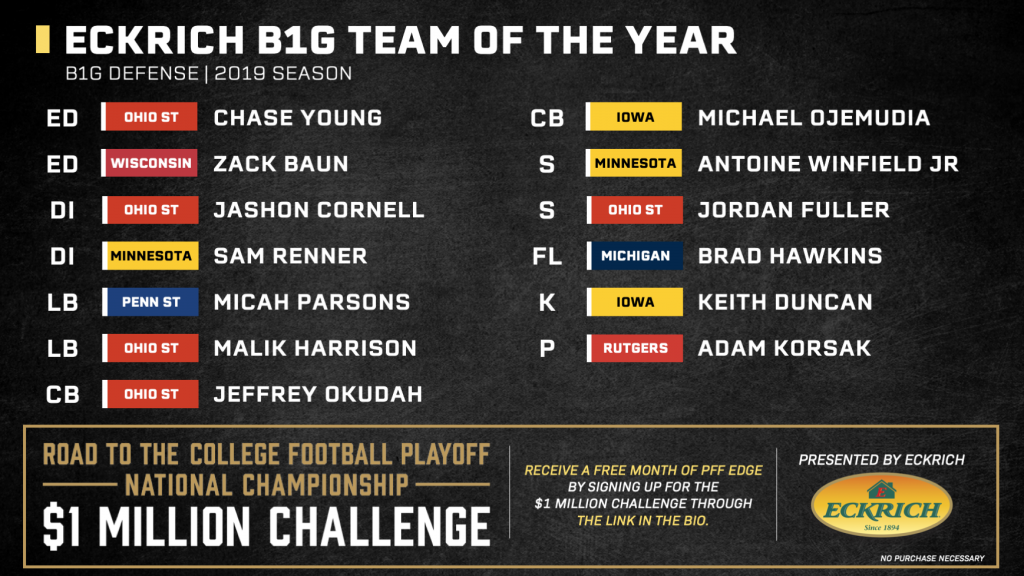 He missed two games and a lot of second halves, but Young was unequivocally the best player in the country this season. His 97.1 pass-rushing grade shattered the previous PFF single-season record.

Baun had a much more diverse usage than Young, as the Wisconsin outside linebacker actually dropped into coverage for 88 snaps this season. Whether it was rushing the passer though (91.1 grade) or playing coverage (90.0), Baun was a playmaker for the Badgers. He racked up 12 sacks, 11 hits and 25 hurries on the year.

Cornell was part of a pretty heavy rotation of interior players at Ohio State, but his production stood out above the rest. He earned grades over 80.0 in both run-defense and pass-rushing on the season.

After registering only eight pressures and seven stops on 400 snaps last year, Renner saw his production skyrocket in 2019. He finished with 22 pressures and 19 stops on 470 snaps this season.

Parsons proved himself to be one of the most prolific run defenders in the entire country as a true sophomore. His 94.8 run-defense grade was far and away the best figure of any linebacker in the country. One of the big reasons why is that Parsons missed only six tackles on 100 attempts all season.

Harrison’s 2019 season saw him earn career-high grades in run defense (88.7) and coverage (78.1). He allowed only 11 catches on 16 targets for 125 yards all season while adding three pass breakups.

Okudah didn’t have a single interception in his career heading into 2019, but that all changed as the junior racked up three picks and added six pass breakups this season. He allowed only 21-of-45 targets for 220 yards and a passer rating of 41.0.

While Ojemudia ended up with 302 yards allowed on the season, he was excellent at keeping things in front of him. Of his 35 catches allowed, only one went for 20-plus yards, and he never allowed more than 55 yards in a single game all season.

The seven interceptions obviously are the headliner, but Winfield was stingy even when not picking off opposing quarterbacks He allowed only 11-of-21 targets to be caught for 145 yards on the season and added two more forced fumbles, as well.

Fuller transitioned from a box-heavy role last season to almost exclusively a deep safety this year for the Buckeyes, and it paid off in a big way. He allowed a passer rating of only 44.4 when targeted and still managed four pass breakups on the year.

Hawkins was one of the most balanced defenders in the BigTen, with grades hovering around 80.0 in run defense (80.6), tackling (83.9) and coverage (80.3). The longest catch he allowed on the season went for only 25 yards, and it was the only catch of 20-plus yards he allowed all year.