Are the Texas Longhorns back to national prominence?

The Texas Longhorns are just over three weeks removed from a season-opening loss to the Maryland Terrapins. They're also just days removed from winning their third straight game and second consecutive contest against a then-top-25 team after beating TCU, 31-16 on Saturday night.

Texas has utilized a balanced attack on both sides of the ball over their three-game winning streak and is seeing some of the best individual play since we began grading college football in 2014. After defeating USC in Week 3, the Longhorns jumped to No. 25 on our Top 25 and are sure likely to see a bump from that ranking after closing the door on TCU this past weekend.

Naturally, with their first sustained success in a few seasons, the question was bound to arise: Are the Texas Longhorns back? Let's take a look.

This feature on the Texas Longhorns is brought to you by Eckrich, the Official Smoked Sausage of the College Football Playoff.

For starters, the Longhorns have received their strongest play from the quarterback position in some time. Sam Ehlinger currently holds a 79.4 passing grade, significantly higher than any of the past five seasons. 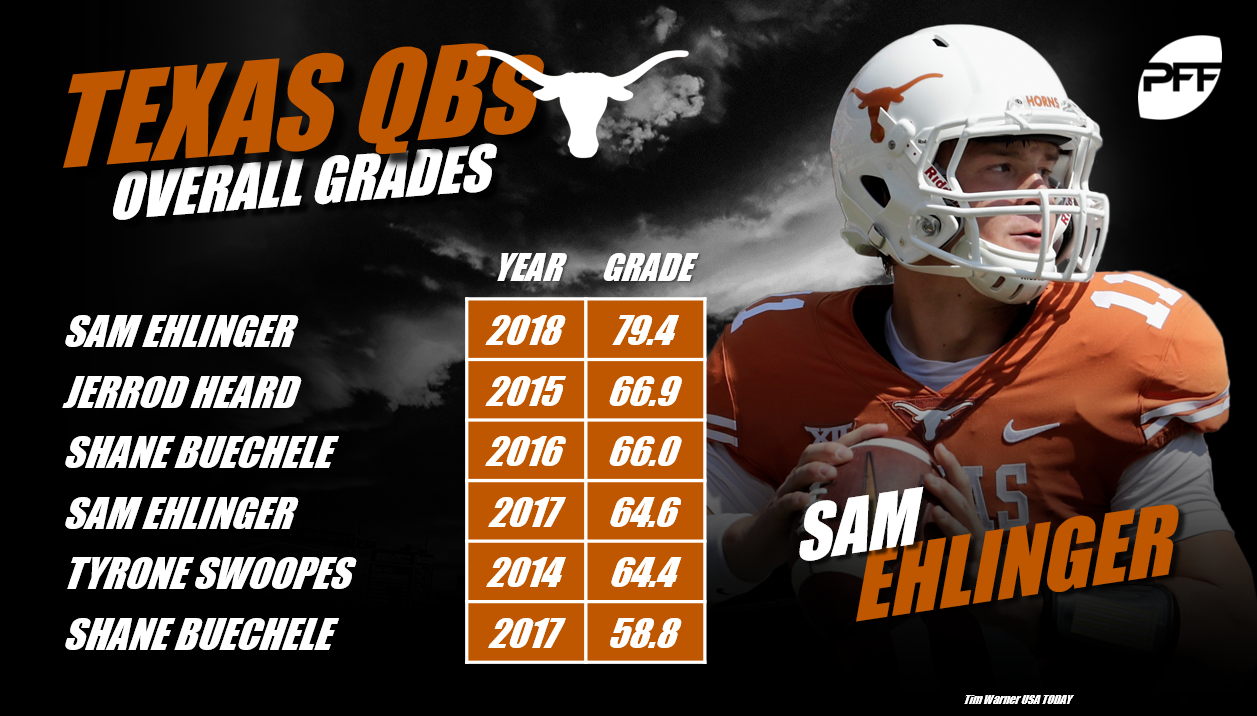 He has accounted for 44 combined first downs and touchdowns, throwing for 973 yards on 80 completions. Ehlinger has dealt well with blitzes from opposing defenses, registering a very admirable 113.7 passer rating on 53 dropbacks against the blitz. He has also put forth an elite grade when kept clean from pressure at 92.0 overall. He has completed 65-of-89 attempts from a clean pocket, yet had four passes dropped, two more thrown away and two batted at the line for an 81.2 percent adjusted completion percentage.

Ehlinger has been able to find his offensive playmakers including his talented wide receiver duo of Lil'Jordan Humphrey and Collin Johnson.

Humphrey currently ranks fifth in the country with 352 yards from the slot as he's turned 32 targets into three touchdowns and averages 3.38 yards per route run from the inside. Johnson has seen a 113.8 passer rating on his targets, catching all 19 catchable passes his way for 291 yards without a drop.

Perhaps the most compelling storyline to come out of Austin through four weeks is the play of the secondary, most notably that of true freshman Caden Sterns. Currently possessing our highest coverage grade among true freshman defensive backs, Sterns has three interceptions and two additional pass breakups despite just seven targets while he's logged 167 snaps in coverage. 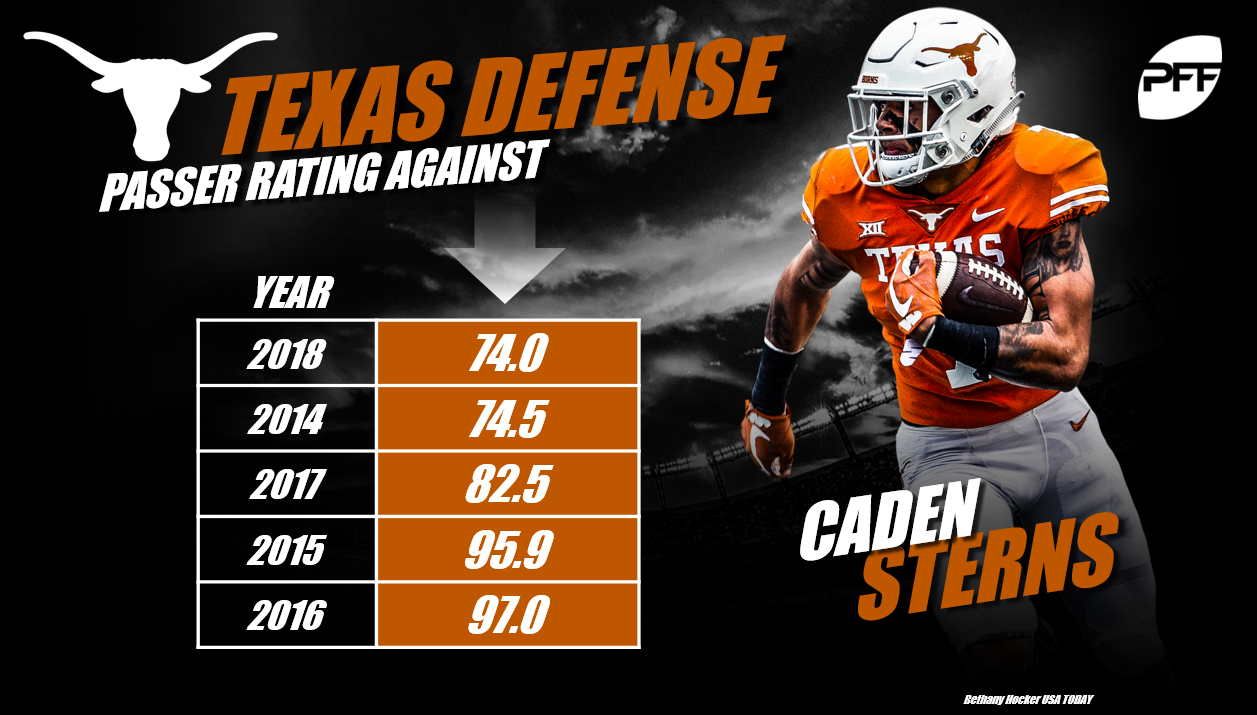 Their secondary as a whole has been impressive, fielding just a 74.0 passer rating on throws from their opponents, the lowest they've seen in five years as a unit.

Kris Boyd leads the way with seven pass breakups while CB Davante Davis also has recorded four himself. P.J. Locke III has been targeted 24 times yet has not allowed a touchdown in coverage as he's also forced a fumble as well.

The defense has generated 51 total pressures through four games with Charles Omenihu leading the way at nine total pressures including a sack, two QB hits and six hurries while Breckyn Hager has chipped in with eight pressures himself.

All signs point towards the defense continuing to put the pieces together and Ehlinger continuing to find his playmakers on offense. If he can take care of the ball and the defense can continually limit the opposition's passing attack, it's a safe assumption to say this team has a chance to not only win some games but maybe even shake up a thing or two in the Big 12 or even the College Football Playoff.

If they can ride their momentum into Manhattan to beat Kansas State and give Oklahoma all they can handle, maybe, just maybe we can say Texas is back.

Either way, we're talking about the Longhorns late in September. And that's a good thing for college football.