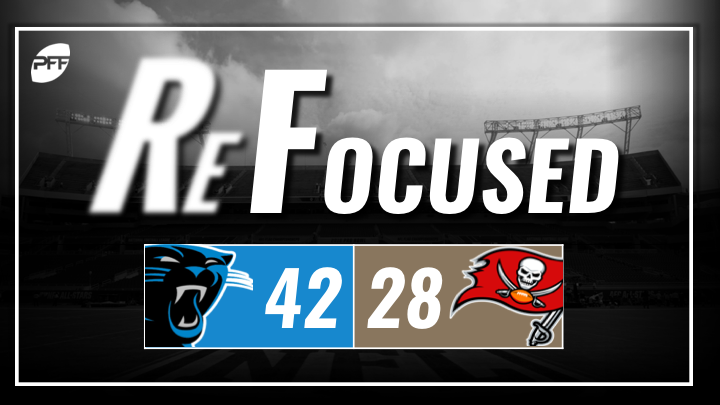 Cornerback James Bradberry had an outstanding afternoon, as he shadowed Mike Evans for much of the afternoon and held him to just one reception for 16 yards. He rarely gave up separation to Tampa Bay's star receiver and consequently contested a number of targets sent his way.

A rotational player at this late stage of his career, Julius Peppers still finds ways to produce. While he didn't make a huge impact rushing the quarterback, he batted down three different passes at the line of scrimmage.

The duo of Christian McCaffrey and Curtis Samuel had themselves impressive days. Samuel scored on a reverse and hauled in a contested catch for a touchdown that put the score out of reach. McCaffrey was electric, as his highlight plays included hurdling a Bucs defender on a catch and run and breaking multiple tacklers on a long run.

Cam Newton had an efficient game, as he spread the wealth to his multiple weapons. Newton sprinkled in a few big-time throws and used his legs to finish the game. Newton isn't being asked to stretch the field as he did in his MVP season but is able to utilize the underneath game more effectively.

Slot wide receiver Adam Humphries looked more like an impact player today as opposed to the fourth or fifth option. His quick, precise route-running led to two impressive touchdown receptions, the second coming on a slant pattern from the 30-yard line that saw him avoid three defenders on his way to the end zone off a short slant pass.

When the Bucs' offense stalled early in the first half and late in the game, it was the offensive line that struggled most. The inability of the line to handle stunts and basic bull-rushes prevented receivers from having the time they needed to run routes and kept Ryan Fitzpatrick on the run.

The Buccaneers' defense never seemed to be able to keep up with all the trick plays the Panthers threw at them. The unit on a whole was continually out of place and just a step behind resulting in multiple missed tackles, over pursues and busted assignments.

Linebacker Adarius Taylor has been struggling all season long, and the Panthers used that to their advantage Sunday. Taylor was one of the weak spots on the Buccaneers defense, as Newton targeted the fifth-year veteran heavily resulted in a perfect passer rating.

Newton and company roared out to a 35-7 lead that was insurmountable for the Buccaneers. The Panthers' offense used misdirection, jet sweeps, end-arounds and reverses to keep the defense off balance and dominate.

Short first-half possessions by the Tampa Bay offense compounded problems for a tired defense that couldn't get off the field.