Galina: Todd Bowles has transformed the Buccaneers' defense, but the Chiefs have an ace up their sleeve

The Tampa Bay Buccaneers are playing in the Super Bowl due in large part to the historic offseason signing of Tom Brady. When a team lands one of the greatest quarterbacks of all time, there's a good chance it'll be competing for the NFL title. And when that quarterback proceeds to play with a rare youthful exuberance for their age, it becomes close to a lock.

Linking up with Brady was a big deal, but it does whitewash some of the excellent work Todd Bowles has done with Tampa Bay's defense over the past two years.

When Bowles became the defensive coordinator after Bruce Arians' appointment as head coach of the Bucs in the 2019 offseason, Tampa Bay was coming off a 29th-place finish in defensive expected points added per play in the regular season. The 2018 Tampa Bay defense was bad, and it was not an aberration. The unit finished 25th the year before, too.

It was a Bucs defense that hadn’t finished higher than 14th in expected points added per play and was buried in the 20-32 range for six of the nine years of the 2010s before Bowles joined. In his first year, the defensive coordinator helped guide a historic turnaround, pushing the Bucs to sixth in the same stat category and then fifth this past season.

Bowles is aggressive yet multiple on the back end. He calls blitzes at the second-highest rate, and while he does play mostly single-high coverages like the rest of the league, he runs Cover 1 and Cover 3 only about a quarter of the time each — which is middle of the pack over the past two seasons. He presents two-high coverage at a slightly above average rate; his Cover 2, Cover 4 and Cover 6 usages all rank between ninth and 14th in the NFL. He loves to mix things up.

This presents a tough dynamic for any offense preparing to face his defense. The scheme versatility paired with heaving to deal with the blitzes can make an offense's head spin. The Buccaneers have been great in almost all areas of defending offenses this season. There is, however, one area where the diversity is muted. When Bowles gets into his 5-2 bear front to stop offenses' rushing attacks, they struggle against the pass.

Against first- and second-down passes in “base defense” — replacing the nickel cornerback with either a Sam linebacker or a fifth defensive lineman, as is the case in Bowles' defense — Tampa Bay ranked 24th in the league in EPA allowed per play in the regular season. You can certainly stop the run with a 5-2 front, but your scheme versatility is handcuffed on the back end. When he does play four-down nickel, he can stay scheme diverse. We can see the difference here:

Nickel vs. Base on Early Downs

The one-high coverages rise from about 40% of his defense to about 63% of his defense. All of a sudden, he’s playing one-high two-thirds of the time. Even Tampa Bay's Cover 2 snaps in base were more of an “inverted 2” variety. Bowles' defense played Cover 2 to the passing strength, but the backside corner would rotate very high to be the other half-field safety. The Buccaneers gave up some one-on-one opportunities to the backside in this coverage. The easiest way to get Bowles into his bear front is to bring heavier personnel on the field offensively. On early downs against 12, 13, 21 and 22 personnel groupings, Bowles plays base 80% of the time.

The issue with playing a five-down front against the pass is the spacing in the underneath zones. If you allocate that many bodies along the line of scrimmage, you have to spin the second safety down low to get enough numbers to the second level of the defense. If not, there is space around the Mike and Will linebackers.

You can remedy this by dropping one of your stand-up edge rushers —  Shaquil Barrett, Jason Pierre-Paul or Anthony Nelson — into an underneath zone, but it isn’t a winning business model. The Panthers were able to get Robby Anderson isolated on an option route against JPP for an easy completion earlier in the season, for example.

These guys are edge rushers, not flat defenders. If one of those players walks out over a slot receiver, you can be guaranteed it’s not man coverage. A true Sam linebacker that comes in to replace the nickel instead of the fifth defensive lineman can mitigate some of these issues, but Bowles prefers the five defensive linemen look. 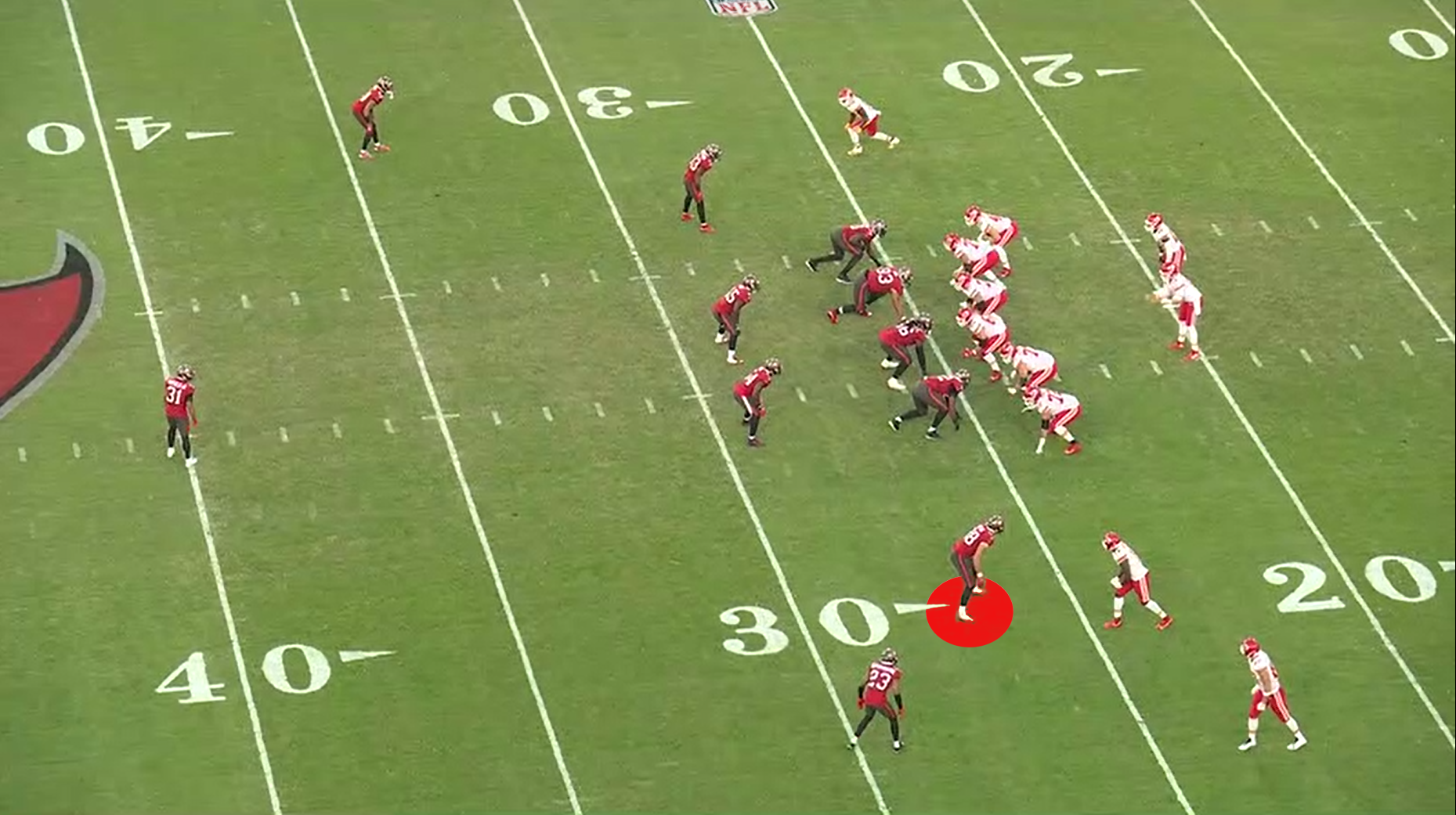 The two linebackers are truly box players. Bowles doesn’t want to align Lavonte David and Devin White too far outside the box to at least cut the difference between the box and the slot receiver. Everything becomes congested closer to the football, which is fine if you are trying to stop the run, but there are holes around it.

The Bucs can definitely stop the run with all these big bodies on the field, as they finished fifth in EPA per play in those situations. But teams realized they couldn’t stop the pass and threw on them over 53% of the time against this heavy front, the highest rate in the league.

The Chiefs come into this game having weathered the proverbial Bowles storm in their Week 12 matchup. Overall, Bowles cycled through his different defenses, mostly to no avail — and really, what defensive scheme can actually stop this Kansas City offense? But he now has a chance to learn from that game in his preparation for the big one Sunday. For example, you’d imagine he’d look to not play as much press man to man Cover 1, which Patrick Mahomes shredded in the first quarter in Week 12.

On one first-quarter snap, the Chiefs were able to isolate Anthony Nelson in the flat and throw over his head to Travis Kelce. A more seasoned zone defender could have played a better sail technique, but Nelson — a pass rusher — played without depth and allowed a big completion. No matter what interesting concepts Bowles wants to throw at the Chiefs when his defense plays nickel to match  11 personnel, Kansas City knows it can just go into 12, 13 and 22 personnel groupings and get exactly what it wants from the Bucs. There is a good chance the Chiefs come out flying as they did in Week 12, but if they get bogged down, they can always go heavy and use Bowles’ defense against them.