Are the Bears turning Mitchell Trubisky into the next Blake Bortles?

While no one likes to admit it, we all succumb to inherent bias in one way or another. As a draft evaluator like myself, it’s nearly impossible to shake anchoring bias, as our brain tends to give a first impression of a player far more weight than subsequent evidence. When it comes to NFL GMs and the most valuable position on the football field, we see outcome bias cloud decision making time and time again. When a team is winning, one is inclined to look far more favorably on all the decisions prior to then even if some were objectively bad.

That’s a roundabout way of introducing the conundrum that is Bears quarterback Mitchell Trubisky. With an 18-8 record the past two seasons starting at the most valuable position on the football field, he must be good, right? If you follow us at all at PFF, you know we disagree. Trubisky has graded out as one of the lowest graded quarterbacks in the NFL both last year and this year. After an offseason of banging the table for him, Bears fans had seemingly come around to our point of view on Trubisky. But to quote Michael Corleone, “Just when I thought I was out, they pull me back in.” The Bears have rattled off three straight victories, with Trubisky earning a 99.1 passer rating over that span, and are suddenly back in the playoff hunt. 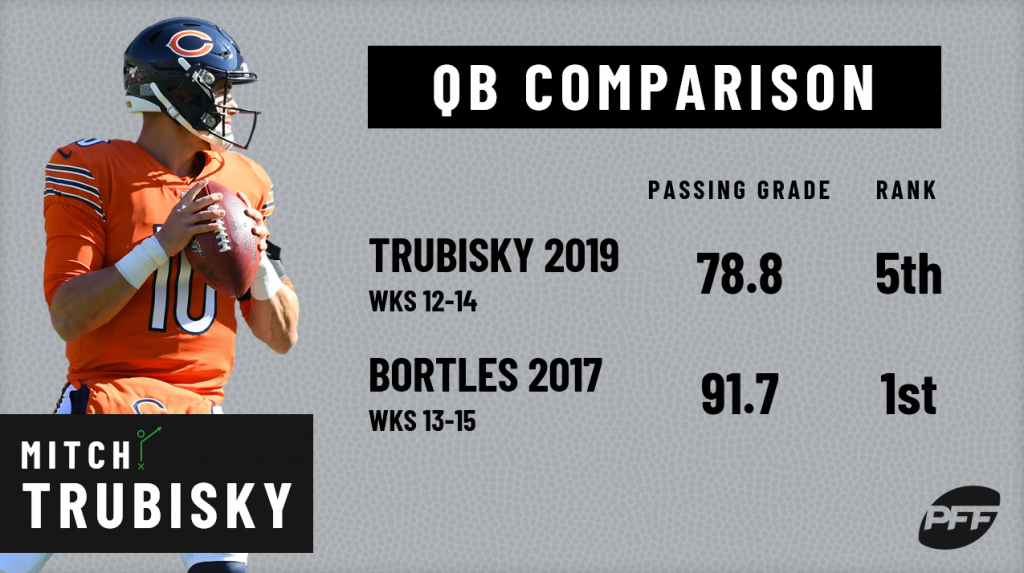 Ultimately, football is a game played on small sample sizes. I don’t care who the player is — over three games, there should be no pulling back in. With us here at PFF, it’s not about digging in our heels on our opinion when Trubisky puts together a solid stretch of play like the last three weeks. It’s about the fact that any meaningful sample size still puts him as one of the worst quarterbacks in the NFL.

This is the same story we’ve seen a handful of times over the past decade. How quickly we forget what happened to the Jaguars with their handling of top-5 pick Blake Bortles. After four seasons of ups and downs, Bortles put together a stretch of play toward the end of 2017 that had many wondering if he’d truly turned the corner. In Weeks 13-15, Bortles averaged over 300 yards a game, threw seven touchdowns, tossed no interceptions, had 10 big-time throws, had no turnover-worthy plays and posted a PFF passing grade of 91.7. It was truly elite play by any objective measure. After the season, Jacksonville handed him a three-year extension despite other free agents, such as Teddy Bridgewater and Kirk Cousins, being available on the open market. I don’t have to tell you how that’s turned out for the Jaguars.

The first thing to note is that statistically and grading wise, Trubisky’s past three games pale in comparison to Bortles or even other quarterbacks who’ve gotten hot yet turned out to be fraudulent. Nick Foles, Case Keenum, Josh McCown (as Bears fans should be familiar with), and — most corollary — Marcus Mariota have all had stretches of play far more impressive than Trubisky’s, yet each came crashing back down to earth afterward. The Titans never gave up on Mariota and petered out to a handful of early playoff exits in the process.

The Bears' third-year quarterback may have beaten the Giants, Lions and Cowboys the past three weeks, but he still threw four picks in the process and had as many turnover-worthy plays (5) as big-time throws, per our charting. Unless you see sustained high-level play, and maybe more importantly, the elimination low-level play, the Bears must explore other options at the quarterback position this offseason. The fact that plays like the ones below haven’t gone away is massively concerning.

His 78.8 grade over that span is solid and would be great to see over an entire season, but that’s kind of the point. This is his high end. This is the best we’ve seen from him. That’s like seeing Drew Brees throw for 349 yards and five touchdowns this past week and saying, “Man, if he only did that every game.” That’s not how it works. And the quicker the Bears realize that with a roster built to win now, the better off they’ll be. With quarterbacks such as Teddy Bridgewater, Philip Rivers, Cam Newton, Jameis Winston and Ryan Tannehill all potentially available for the Bears this offseason, they’d be succumbing to their own bias in a big way by pigeonholing themselves into Trubisky for 2020 without seeing a drastic improvement down the stretch and into the playoffs. At the most valuable position on the football field, that would be downright irresponsible.