The Bengals are getting the ball out of Joe Burrow's hands much faster, and it's working wonders for the offense

That's what the cameras caught Joe Burrow telling star receiver Ja'Marr Chase on the sideline during the Cincinnati Bengals‘ Week 7 game against the Atlanta Falcons. And the truth is that Burrow had every reason to feel good — his offense was firing on all cylinders and managed to put 30 points on the board for the second consecutive week, a feat he failed to achieve during the first five weeks of the season.

A lot of credit needs to go to head coach Zac Taylor and offensive coordinator Brian Callahan for catering to Burrow’s strengths over the last few weeks and making changes to Cincinnati’s offensive approach during the season.

One of the Bengals' biggest issues in the early stages of the 2022 season was that Burrow found himself under consistent pressure and got hit a lot as a result. And that was a product of a few factors: a new offensive line struggling, Burrow inviting pressure himself and the quarterback needing to hold on to the ball longer due to play calling. 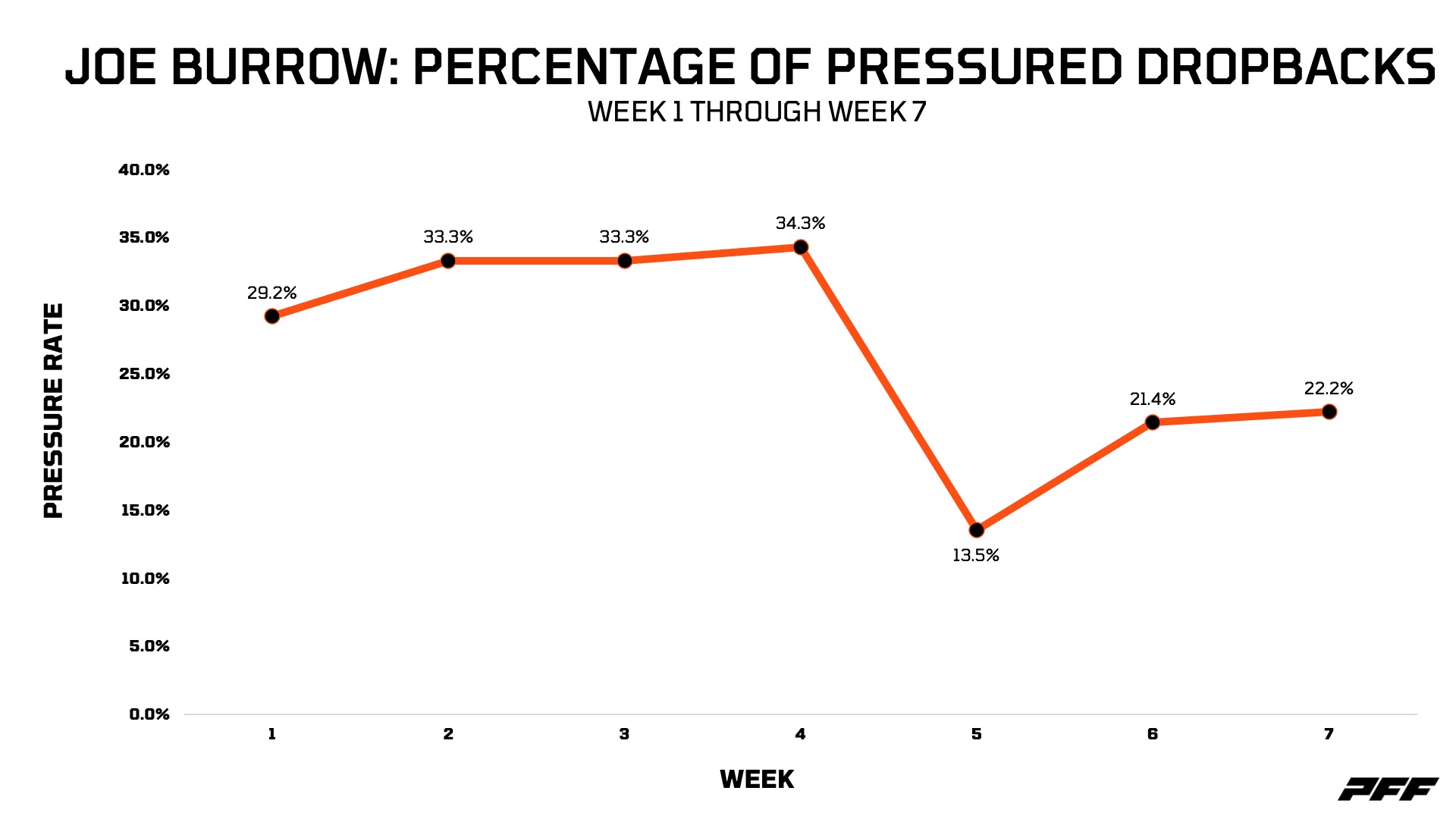 Fixing the last issue was the key to helping the other factors, and it led to a huge improvement for the offense because Burrow has been exceptional when he's got the ball out of his hands quickly.

On plays when he releases the ball within 2 seconds, the Bengals offense ranks second in the league in expected points added (EPA) per play. However, on plays when he holds on to the ball longer, they rank just 13th in EPA per play.

Over the last couple of weeks, the Bengals implemented multiple changes to help get the ball out of Burrow’s hands quicker.

From Week 1 to Week 5, Cincinnati ran play action on 20.7% of dropbacks, the eighth-lowest rate among teams in that span. But over the last two weeks, the team has used play action on just nine of 92 dropbacks (9.8%), which ranks dead last in the NFL.

While play action can be helpful for a lot of quarterbacks, it also delays when he can read the defense and forces the player to hold on to the ball longer — the opposite of what the Bengals want to achieve. In fact, Burrow has faced pressure at the fourth-lowest rate in the NFL on plays when he does not use play action.

Spreading the field out and reading defenses pre-snap was one of Burrow’s biggest strengths during his sensational stint at LSU, and he is still very efficient from this formation in the NFL.

Finally, the Bengals have almost completely removed pass plays from under center, which is another situation that hinders a quarterback's ability to read defenses quickly. Over the first five weeks, Cincinnati called an average of 5.8 pass plays from under center, but over the last two weeks — against the New Orleans Saints and Atlanta Falcons — they called a total of two such plays.

So, did the Bengals coaching staff achieve its initial goal? Burrow got rid of the ball within 2 seconds on 21 plays versus the Falcons, a season-high for Cincinnati and second to only the Green Bay Packers in Week 7.

As a result of these changes, Burrow is back to playing at his best. He recorded a 91.8 PFF grade against the Falcons last week, the second-best single-game mark of his career, and he had three big-time throws and no turnover-worthy plays.

The last time the Bengals signal caller had at least three big-time throws and no turnover-worthy plays was Week 17 of the 2021 season — the game against the Chiefs that started the Bengals' memorable run. And we all know how that ended.

Burrow and Bengals fans must hope this improvement in form leads to similar results as Cincinnati heads to Cleveland Monday night in search of a third consecutive win.