The best part about fantasy football is the season never ends. Sure, technically speaking, the 2018 NFL regular season is over. But we’re in the thick of the playoffs with the NFL scouting combine just over a month away. Then there’s free agency which spills into the draft. Minicamps and OTAs follow shortly after. Before we know it, the Fourth of July is here and we’re right back into fantasy draft mode.

In other words, it’s never too early to start prepping for next season. Let’s get the 2019 fantasy football season started with our first batch of rankings. The following list is for PPR scoring. Of course, this is only the first incarnation of 2019 fantasy football rankings. With so much yet to unfold across the NFL landscape, this list will undergo many changes over the next several months. We’ll give plenty of updates along the way in addition to rankings for standard scoring, dynasty leagues, best ball, and IDP. 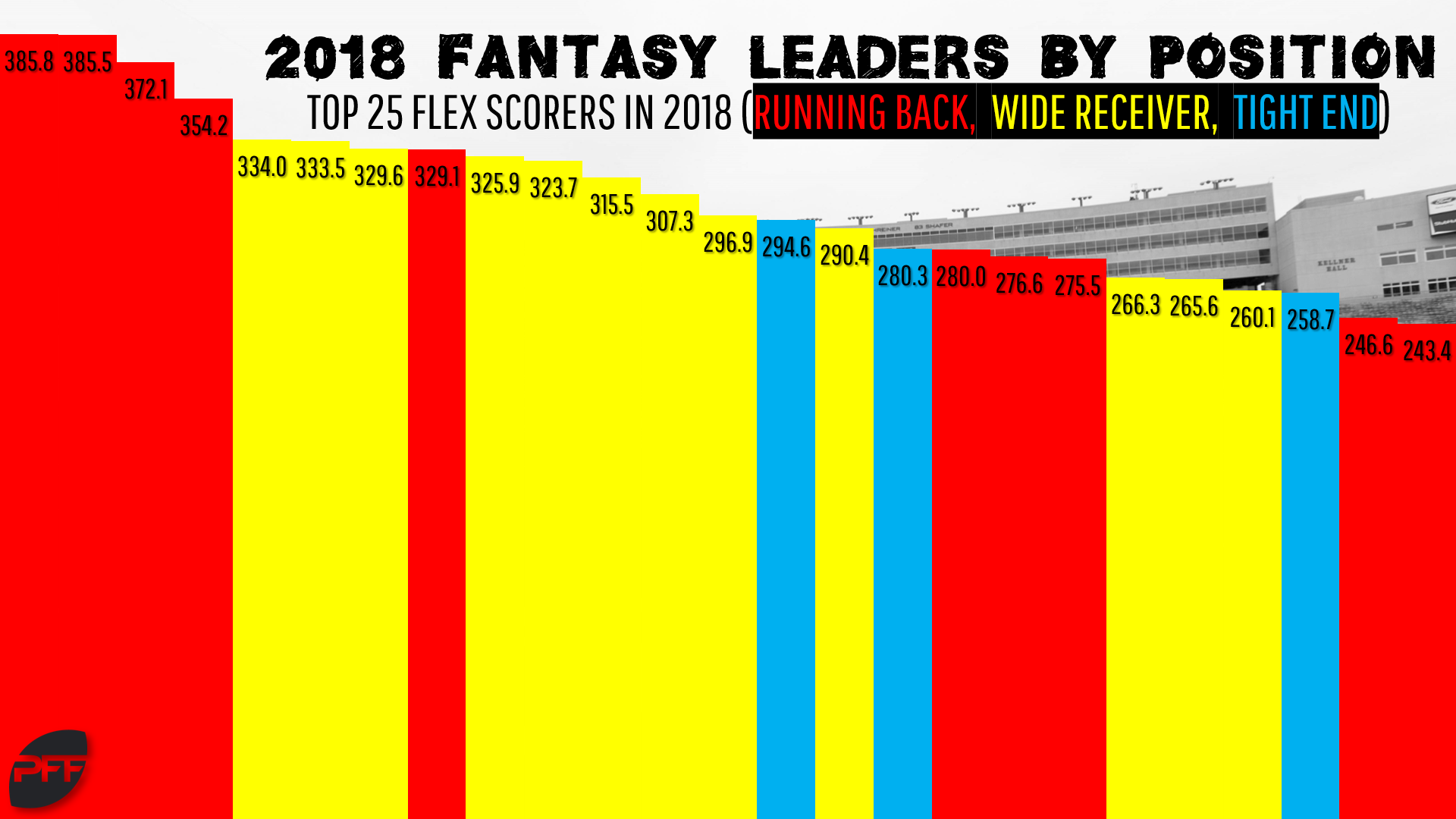 If there’s one thing 2018 taught us, it’s that an elite fantasy running back can take you a long way. The top tier of players in this year’s drafts is all but guaranteed to be dominated by running backs with Todd Gurley at the top. Of course, the great debate is who should go No. 2? A case could be made for any of the remaining four players, but Barkley gets a razor-thin edge over the field for that distinction in this first set of rankings.

After the top five, things get a little tricky. It’s likely that fantasy players will covet running backs in the first round, and that could create some very appealing values at wide receiver in the second and third rounds. Only three wideouts appear in the top 12 in these rankings, and interestingly, none of them are named Antonio Brown. So that means there’s the very real chance that you could score one of the top fantasy wideouts of the last decade in the second round. 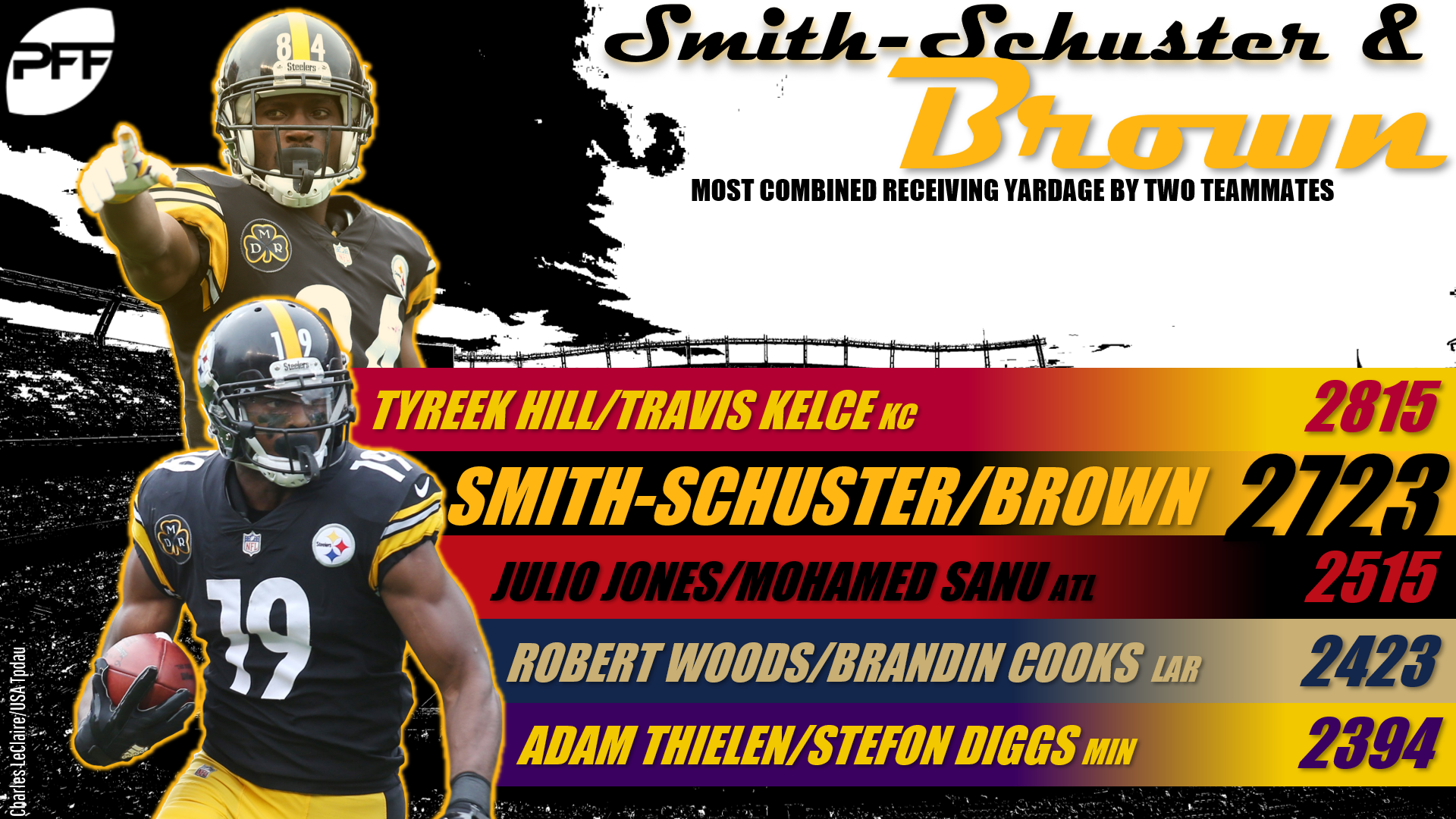 The names on this list should jump off the screen. In this tier, we have the year’s No. 2 and 3 fantasy wideouts in Jones and Hill. Brown wasn’t far behind them at fifth. His teammate, Smith-Schuster racked up 1,426 yards and a massive 111 catches. Beckham was banged up to finish the season, but before the injury he was top-10 among wideouts in fantasy scoring despite the overall ugly state of the Giants offense. Likewise, Allen missed time at the end of the season, but was a top-10 option for much of the year.

So in the second round, you’re likely going to be able to get an elite wide receiver option, or you could step up and take Kelce. Tight end has the most sizeable gap between the elite options and back-end fantasy starters, which means Kelce’s value will likely settle out in the early second-round range.

Now, do the same thing at wide receiver. The above names don’t look too bad, do they? Now take a look at last year’s ADP. It’s the same exact thing. Thomas, Admas, Allen, Green, Evans, Hill, Diggs, Hilton, Cooper, Thielen, Smith-Schuster, and Cooks all went in the second through fourth rounds. The sharp drafter likely grabbed a first-round running back then plucked stud after stud at wide receiver in the next three rounds. If these early rankings are any indication, you’ll be able to do the same exact thing in 2019.

Patrick Mahomes gets his own mini-paragraph because another debate we’ll have this year is where should he go in fantasy drafts. Note that it’s a very different question than where will he go. In home leagues, there’s a chance you see him picked in the first round. That’s too early, and you know that. But where should he go? Mahomes is a special talent, but even he shouldn’t go any earlier than the fourth round. You might think that’s crazy, but the value at the position this year would suggest otherwise. More on this to come over the next eight months.

After six rounds of players, we’re sitting with 26 running backs, 29 wide receivers, one quarterback, and four tight ends. That’s about par for the course, but this is where things start to get interesting at running back. We have some upside breakouts at the top of this tier (Johnson, Lindsay, Carson, Mack) to go along with some question marks returning from injury (McKinnon and Guice) and some PPR options (White and Cohen). There’s a lot of appeal in targeting your second running back in this range of players. 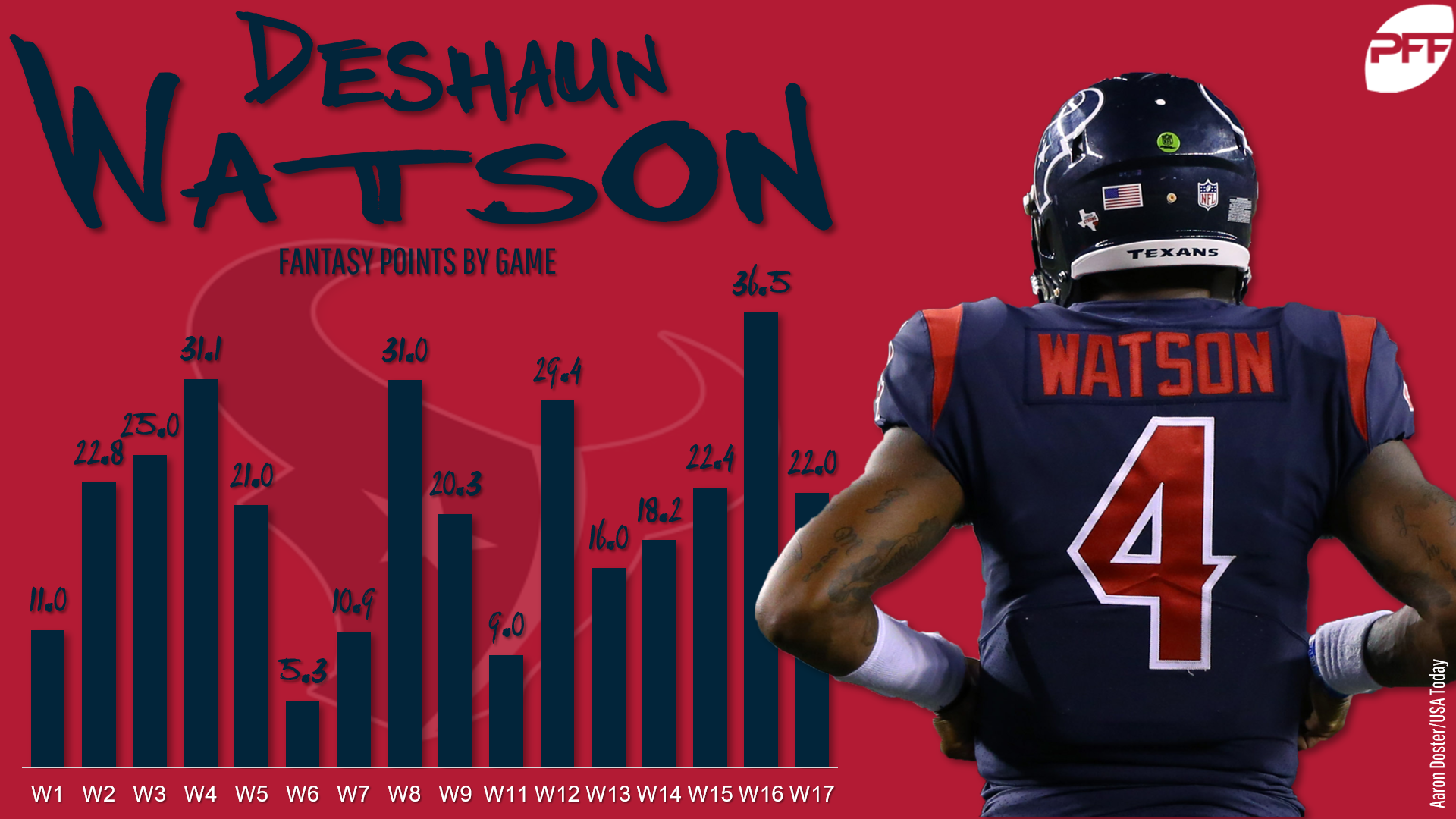 There’s almost no way the second quarterback lasts this long in home league drafts, but the flat value at the position has really depressed the fantasy stock of the top options at the position. Of the quarterbacks not named Mahomes, Watson really stands out as the player with the best shot of finishing No. 1 at the position. He finished fourth in 2018, but was tremendous down the stretch, scoring the second-most fantasy points from Week 11 on. That’s especially impressive considering Watson accomplished that with a banged-up wide receiver corps. A healthy Will Fuller and Keke Coutee will only help Watson’s fantasy production.

Things weren’t supposed to be the way they ended up at tight end in 2018. Henry was going to break out and be a massive draft day value as a sixth-round pick. But football is a cruel mistress, and his offseason injury nixed that plan before it even began. This story might just have a happy ending after all, as Henry was activated for the Chargers Divisional Round playoff game against the Patriots. That means the recovery will be far in the rearview mirror when 2019 fantasy drafts roll around. So let’s just pretend like last year didn’t happen and cue the Henry breakout for next season.

Without looking answer this question: who were the Nos. 2 and No. 3 fantasy quarterbacks in 2018? Okay, this is an easy one if you look above to the rankings. Ryan ended the year second with Roethlisberger just behind him in third. These guys had tremendous fantasy seasons Roethlisberger led the league in passing yards (5,129), and Ryan finished third with 4,924. Not to mention that both signal-callers topped 30 touchdown passes. But here’s the thing: there’s a good chance one or both of these guys will get overlooked in your drafts. And hey, I get it. Neither player is the sexiest fantasy option. But sexy doesn’t win fantasy championships. Points do, and these two put up a ton of points in 2018. 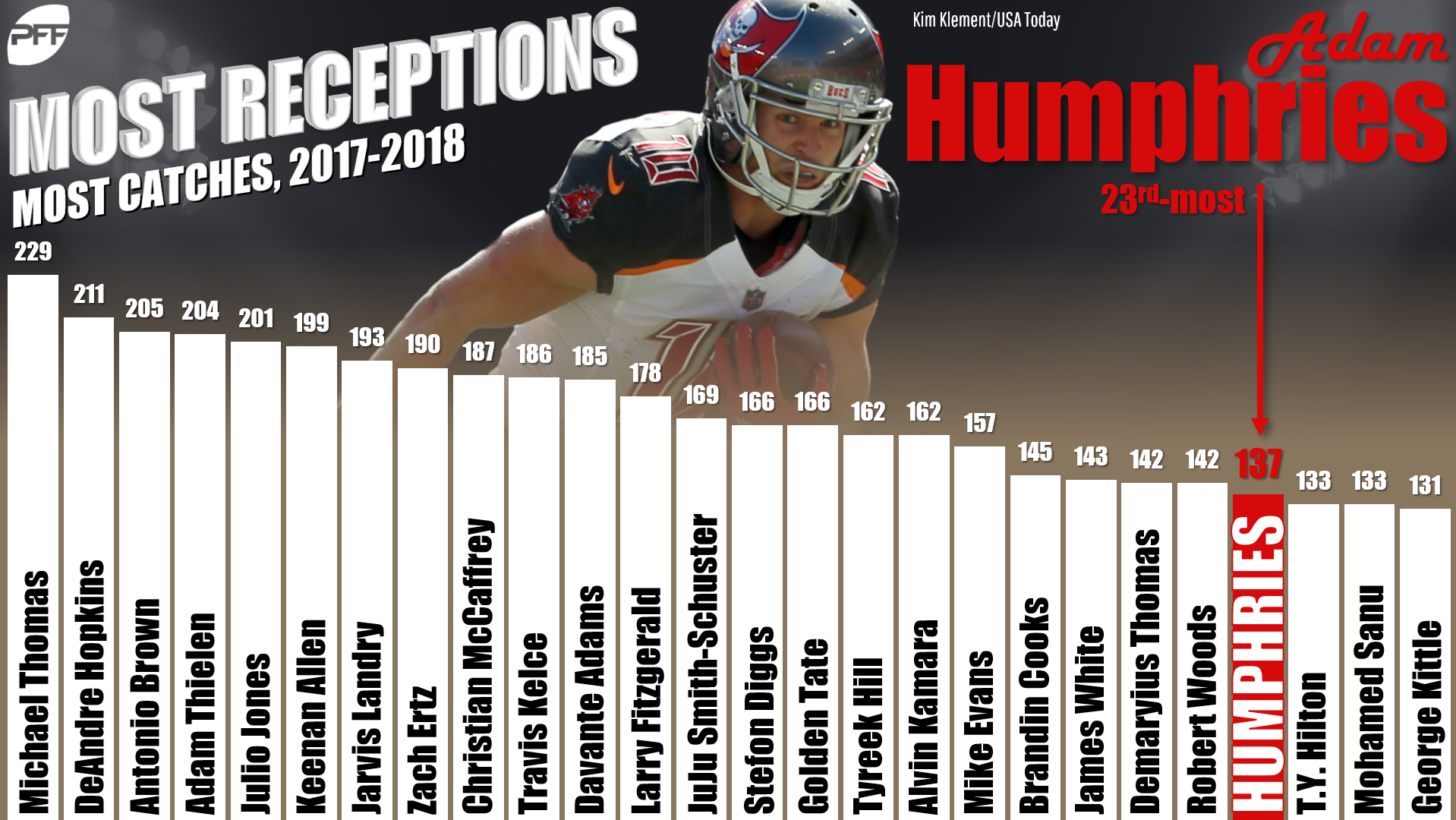 Did you realize Humphries had more catches than Kenny Golladay or Amari Cooper in 2018? It’s true. Humphries racked up 76 receptions on 103 targets. He also finished the season as fantasy’s No. 24 wideout. While he isn’t a player we’re going to target for upside, he should be monitored in the offseason. Bruce Arians taking over as the Bucs’ head coach will be big for whoever mans the slot in the Tampa offense. Slot receivers under Arians have been PPR monsters in the past. Sure, Mike Evans is going to get his regardless, but the slot receiver in Tampa will be a PPR fantasy factor in 2019.

It’s unlikely that the Chiefs open the season with Ware and Williams as their two primary backs, but one of these guys will move up if that does happen. Instead, we should expect the team to address the position either in free agency or the draft. Depending on who they add, that player will be at least an RB2 and quite possibly an RB1.