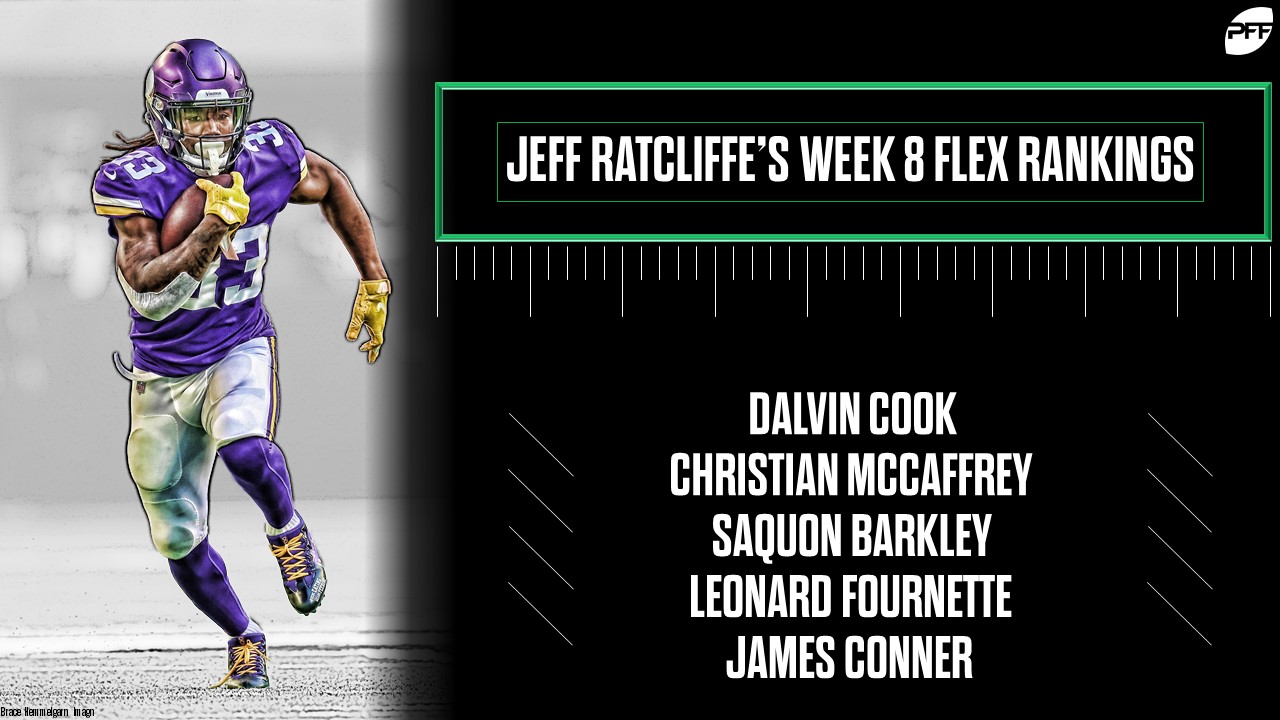 1. Dalvin Cook, MIN vs WAS (RB1) — He leads the league with a massive 12 goal-line carries and is set up for another big game on Thursday night.

2. Christian McCaffrey, CAR @ SF (RB2) — This is a tough matchup for McCaffrey, but he's still an elite option every week.

3. Saquon Barkley, NYG @ DET (RB3) — Expect the Giants to lean on Barkley this week, which is especially good considering what opposing running backs have done against the Lions this season.

4. Leonard Fournette, JAC vs NYJ (RB4) — The Jets just gave up three rushing scores to Sony Michel and Fournette is second in the league in touches per game.

5. James Conner, PIT vs MIA (RB5) — With the Dolphins on tap this week, Conner is a good bet to produce top-5 fantasy numbers among running backs.

6. DeAndre Hopkins, HOU vs OAK (WR1) — After a six-week drought, Hopkins got in the end zone last week. He also gets a very tasty matchup this week.

7. Chris Carson, SEA @ ATL (RB6) — With Rashaad Penny fading, Carson is locked in as the feature back in Seattle.

8. Le'Veon Bell, NYJ @ JAC (RB7) — Bell didn't put up big numbers against the Pats, but he ran hard. He's in play as an RB1 this week against the Jags defense that has given up chunk yards to running backs this season.

9. Julio Jones, ATL vs SEA (WR2) — Keep an eye on Matt Ryan's status this week. If he sits, Jones will move down to back-end WR1 territory.

10. Michael Thomas, NO vs ARI (WR3) — There's a chance Thomas sees a shadow from Patrick Peterson, but we still expect him to see his usual double-digit targets.

11. Todd Gurley, LAR vs CIN (RB8) — He's been frustrating to own this year, but Gurley gets a big-time matchup boost this week.

12. Cooper Kupp, LAR vs CIN (WR4) — Likewise, Kupp gets a solid upgrade against the lackluster Bengals.

15. Derrick Henry, TEN vs TB (RB10) — While this is a tough matchup for Henry, he's still in play as a fringe RB1 given the heavy volume he's seen this season.

16. Tyler Lockett, SEA @ ATL (WR6) — The Seahawks passing game get gets a solid upgrade against the fantasy-friendly Falcons.

19. Josh Jacobs, OAK @ HOU (RB12) — The rookie back has seen a heavy workload this season and that should continue against the Texans.

20. Marlon Mack, IND vs DEN (RB13) — Mack gets a tough draw against the stout Broncos run defense, but he's a candidate for 20-plus carries nearly every week.

21. Tyreek Hill, KC vs GB (WR8) — Matt Moore doesn't help the cause for Hill, but he showed last week that he can still produce with Moore under center.

24. Kenny Golladay, DET vs NYG (WR10) — Golladay put up a clunker last week, but he'll bounce back in a big way against the Giants.

25. Julian Edelman, NE vs CLE (WR11) — The Pats acquired Mohamed Sanu this week, but that doesn't mean we should expect any dip in Edelman's workload.

26. Latavius Murray, NO vs ARI (RB15) — Alvin Kamara's high ankle issue could put Murray in play as an RB1 again this week.

27. Stefon Diggs, MIN vs WAS (WR12) — With Adam Thielen banged up, Diggs is in the WR1 conversation with an extremely favorable matchup on tap against Washington.

28. Tevin Coleman, SF vs CAR (RB16) — It's tough to draw any conclusions from last week's contest, so Coleman remains an RB2 for fantasy.

30. John Brown, BUF vs PHI (WR14) — Brown is top-20 among wideouts in fantasy score and gets to face the Eagles this week.

45. Chase Edmonds, ARI @ NO (RB19) — We're ranking both Edmonds and Johnson for now, but Edmonds will move up if Johnson is unable to play.

50. Calvin Ridley, ATL vs SEA (WR25) — With Mohamed Sanu out of the mix, Ridley's fantasy stock is trending up. However, keep an eye on Matt Ryan's status.

93. Mohamed Sanu, NE vs CLE (WR48) — It may be a week too early to consider Sanu as a fantasy starter, but this move will help his fantasy stock going forward.

110. Keke Coutee, HOU vs OAK (WR57) — With Will Fuller out, we prefer Kenny Stills over Coutee. That said, Coutee is worth an add in deeper leagues.