The Week 5 Big 12 Eckrich Team of the Week powered by PFF saw some impressive performances and, of course, the strength of opponent also factored into the overall selections as did the PFF player grades. 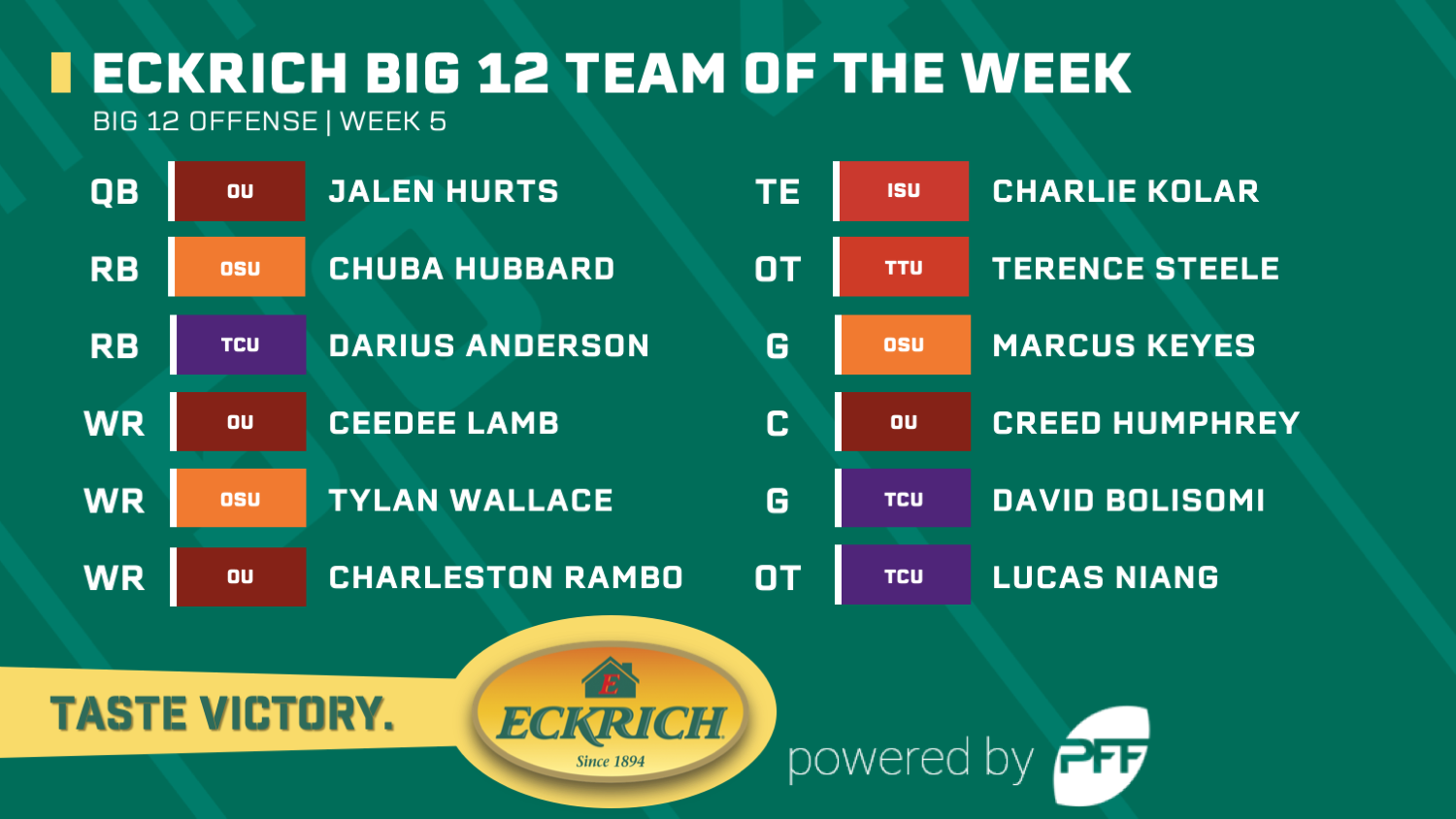 Hurts finished with an elite passing grade of 89.4 and overall grade of 91.9 as he completed just 17 passes for 415 yards. He uncorked three big-time throws including a beauty inbetween coverage 45 yards downfield and he was rested just into the third quarter as the game got out of hand early.

Hubbard had some serious running lanes to gain big chunk plays against Kansas State, but when presented with an issue, he made his own way just fine. He gained 84 yards after contact and forced six missed tackles on the ground as he and the Cowboys took care of the Wildcats on Saturday night. Hubbard now leads the country in rushing yards by a comfortable 280-yard margin.

Anderson finished the day with 55 of his yards coming after contact as he broke four tackles and scored a touchdown with four more of his carries gaining a first down. He's been a reliable runner all season long for the Horned Frogs and certainly doesn't seem to be letting up anytime soon.

Lamb dominated the early-game headlines before Smith took the field as he hauled in seven receptions for 185 yards and three scores. Lamb gained 134 of his yards after the catch and hauled in two more first downs on his grabs as he showcased what makes him perhaps one of the 2020 NFL Draft's top all-around receivers.

Wallace finished with eight catches for 145 yards in this one, churning out 54 yards after the catch. While he didn't score a touchdown, he finished with five first-down receptions and a 114.8 passer rating when targeted.

Rambo has quickly become one of the nation's top deep threats, finishing the game with just two catches but a whopping 122 yards. Anytime you average 61.0 yards per reception, good things are bound to come.

Kolar was the most-targeted tight end in the conference and he turned those into five receptions and 72 yards for a touchdown. He broke two tackles after the catch and saw a whopping 156.3 passer rating when targeted by Brock Purdy.

Steele finished the afternoon with just one QB pressure surrendered as he was seemingly the lone member of the Red Raiders offense that had a great game from the opening snap.

Keyes may have allowed a sack and a hurry in pass protection but his run-blocking grade more than buoys him into this spot. He paved multiple lanes for Hubbard to run through and had a dominant outing.

Humphrey didn't allow a single QB pressure in his limited time in the lineup and had the conference's third-highest run-blocking grade as he, like the rest of the Sooners, had a quick outing in their blowout over Texas Tech.

Niang did not allow a single QB pressure in this outing and finished with the conference's third-highest run-blocking grade despite a small number of snaps played on Saturday. 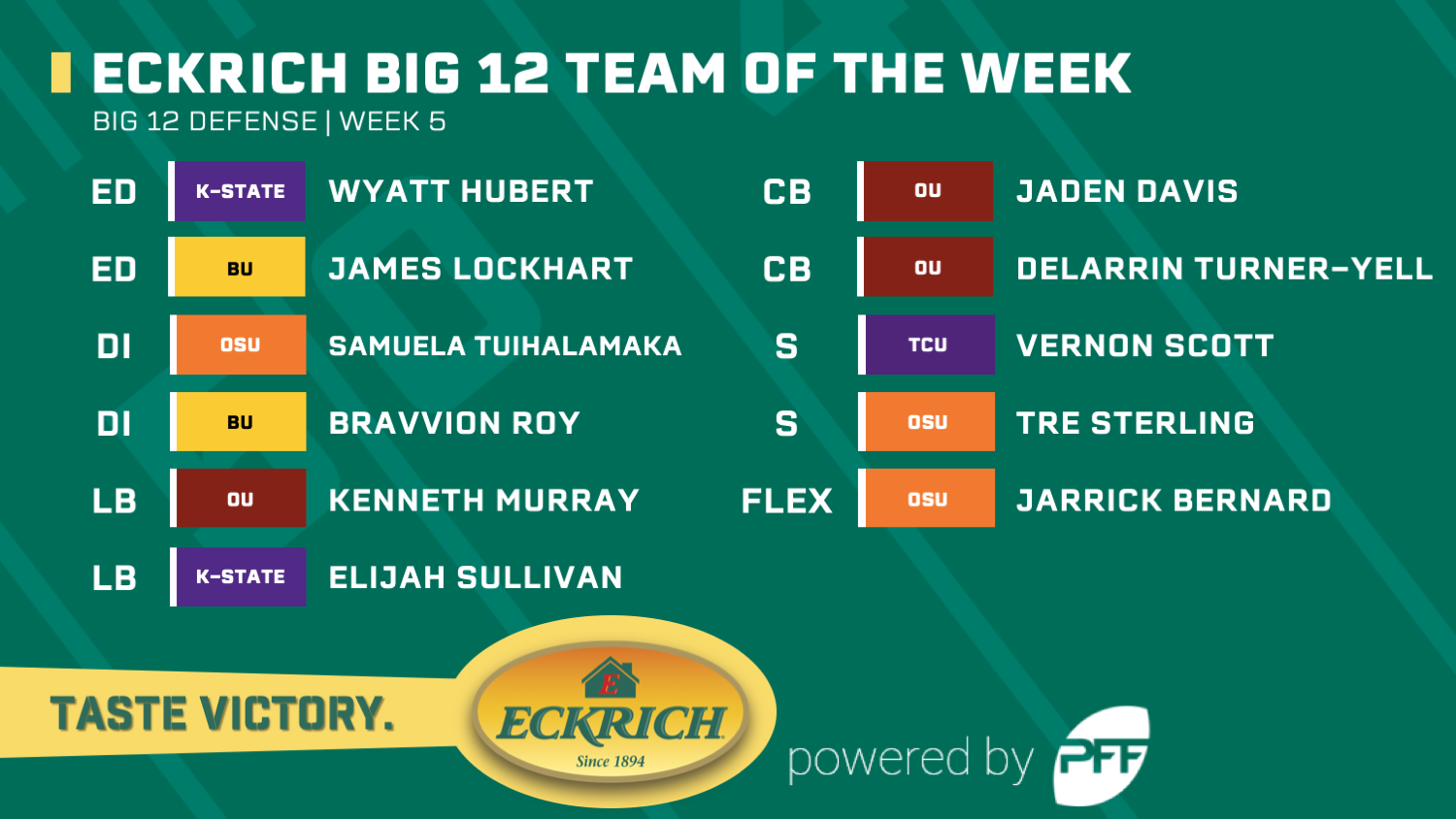 Hubert finished the afternoon with six total pressures that included two sacks, a QB hit and three more hurries. He had two more stops against the run as he finished with the conference's top pass-rush grade among edge defenders.

Another week, another ‘James' from Baylor on the list. After both James Lynch and Lockhart being named to the First Team a week ago, Lockhart finds his way back on after leading the conference with seven total pressures along the edge. He whipped out another defensive stop in the run game in a great outing.

Roy was a thorn into the middle of the Iowa State offensive line all game, finishing with seven QB pressures including a sack, a hit and five more hurries. he made two total tackles in the run game and didn't miss a single attempt.

Tuihalamaka made his biggest impact in the run game for the Cowboys, recording two solo tackles that both were recorded as a defensive stop. He forced a fumble as well as he was dominant up the middle.

Sullivan's biggest moment came in coverage where he finished with a conference-high 78.1 coverage grade. He nabbed an interception while also recording three stops in the run game for the Wildcats.

Murray flew around the middle of the field for the Sooners against Texas Tech, allowing just four yards into his coverage and recording five total defensive stops, three more of which came in the run game. He made a sack on one of his two blitz attempts as well, rounding out a great afternoon.

The sensational true freshman had another dominant outing. On 15 snaps in coverage, he was targeted just once and didn't allow the receptions while he made two stops in run defense against Texas Tech.

Turner-Yell finished the afternoon with just one reception allowed on two targeted passes including just six yards allowed after the catch. He made a defensive stop in the run game and had five total tackles altogether.

Scott was targeted five times as the primary coverage defender and didn't allow a single reception with three pass breakups to his credit. He chipped in with a defensive stop in the run game in an all-around solid performance.

Sterling was all over the field for the Cowboys, seeing five targets come his way and making four solo tackles. He allowed all of 31 yards in coverage and made two defensive stops and did all this without a single missed tackle.

On six targets as the primary coverage defender, Bernard allowed two receptions to go for just five yards while recording a pass breakup. He made six solo tackles, four defensive stops and didn't have a single whiff in the game.