• Best and worst coaches: The New York Giants, Minnesota Vikings and Washington Commanders are making the most of their rosters and winning more games than expected. The Houston Texans, Cleveland Browns and Green Bay Packers are not.

Jeff Saturday and the Indianapolis Colts continued to surprise the league with their tenacity and brought their Week 11 game against the Philadelphia Eagles right down to the wire. After their loss to the Washington Commanders last week, you’d have thought that Jalen Hurts & Co. would have come back looking for revenge.

Meanwhile, the Minnesota Vikings lead the NFC North by a wide margin, but their Week 10 overtime win against the Buffalo Bills was quickly overshadowed by a blowout loss to the Dallas Cowboys in Week 11. Kirk Cousins and the rest of the Minnesota offense earned their second-worst PFF grade (58.3) on offense and generated a season-low -0.275 expected points added (EPA) per play. Cousins was sacked seven times and completed a little over 50% of his passes.

The Lions have won three games in a row and now own the longest winning streak in the NFL. They may have found their rhythm, as the defense is holding up much better than it was at the beginning of the season. Running back Jamaal Williams is stealing the show and added three touchdowns to his total against the New York Giants this past week. His 12 touchdowns lead the NFL through Week 11.

The Vikings played a weird game against the Cowboys. You can make the case that it was an “off day,” but the Vikings have a -2 point differential despite their 8-2 record. They’re winning the close games and not blowing out opponents, so their 37-point loss to the Cowboys sees them fall four spots in our power rankings.

Now that there are just seven weeks left of the regular season, we looked at the coaches who have made the most significant impact in terms of wins.

Using Tej Seth’s wins over expectation metric, we can determine which coaches have performed better than an “average” coach. Below are the teams that are getting the most and least out of their rosters so far. 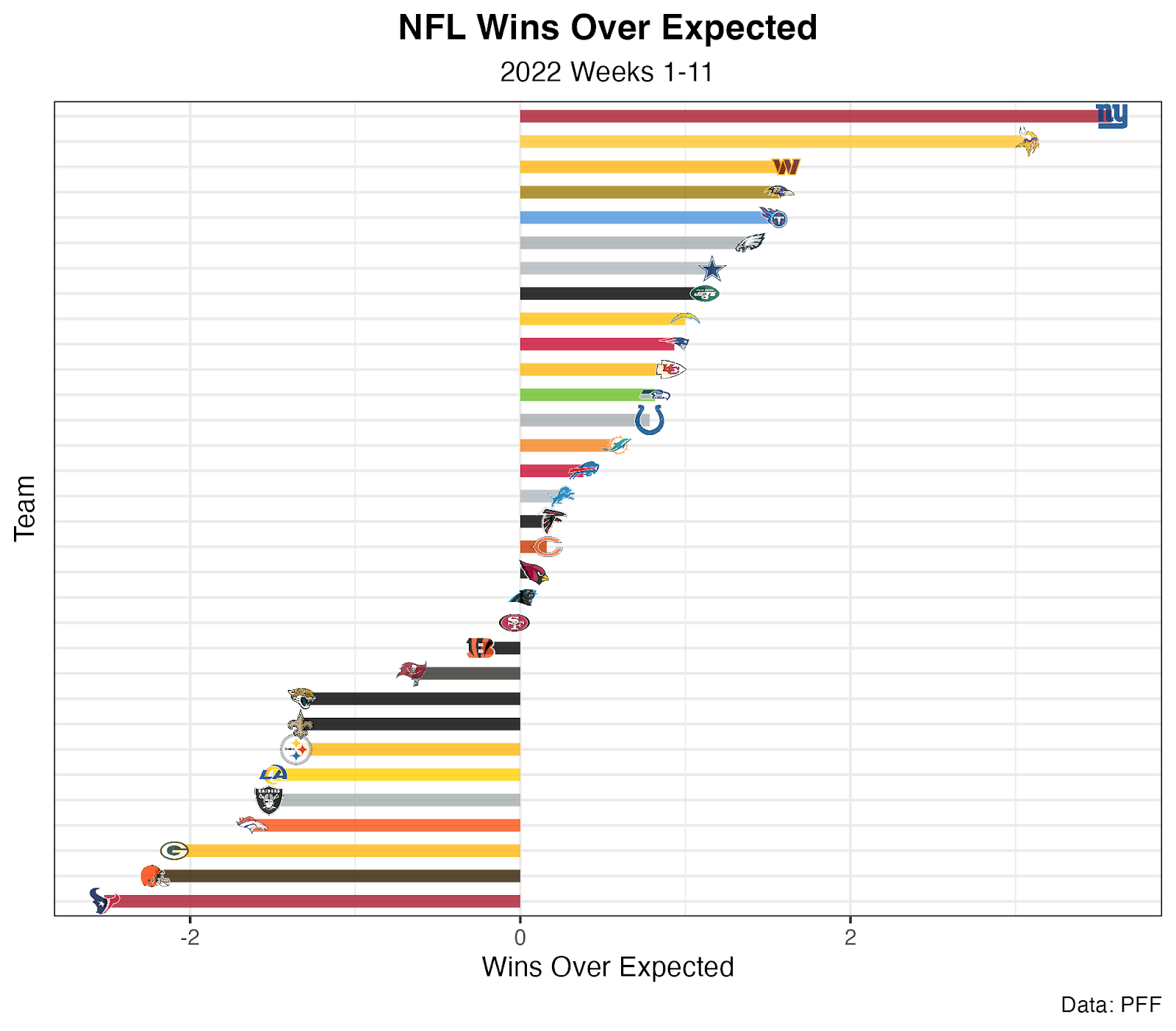 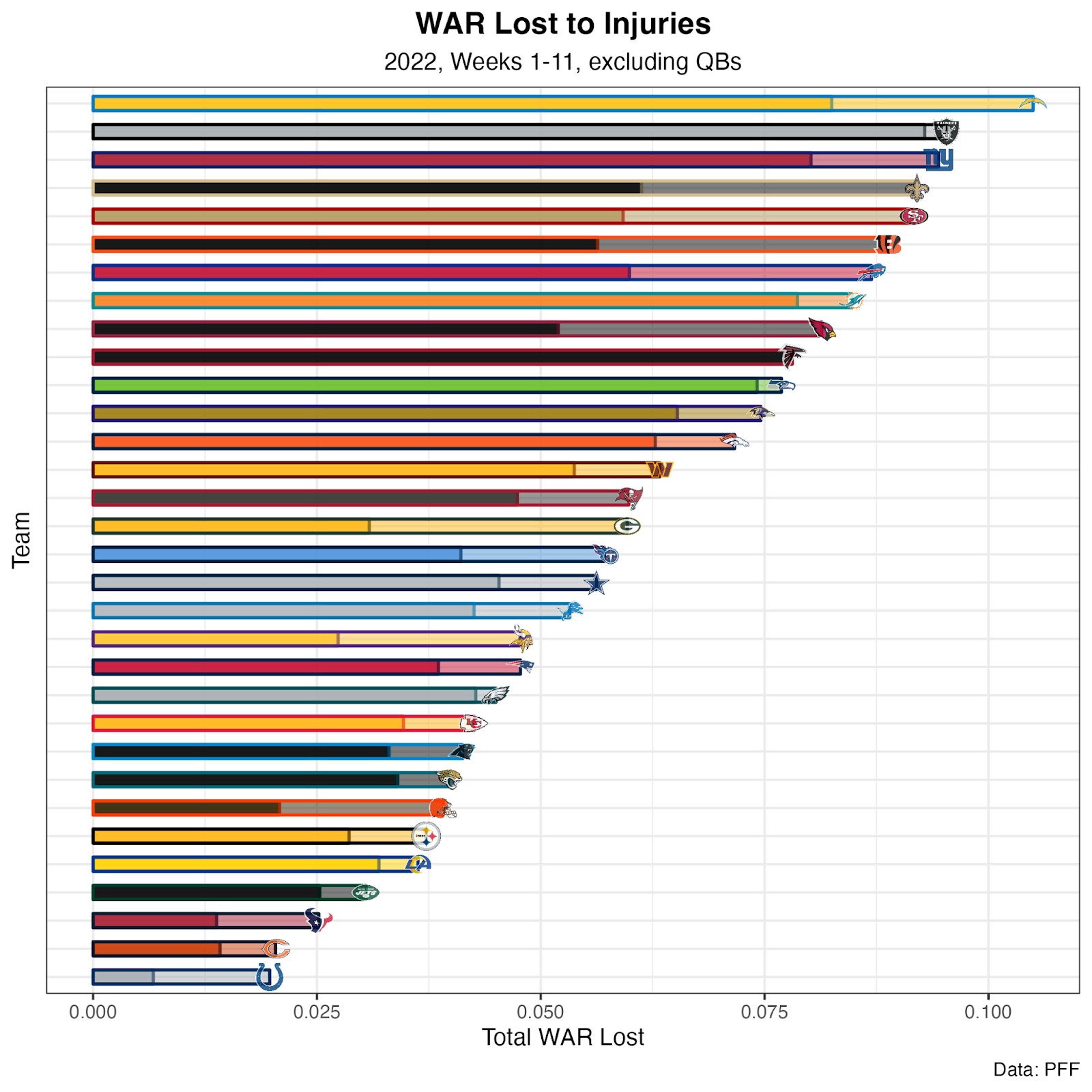 Pitts done for the year: The Falcons suffered a big blow when tight end Kyle Pitts suffered a knee injury that might keep him out for the rest of the season. Although he hasn’t been as productive as he was in his rookie year, his 0.15 WAR ranks 11th at his position. The Falcons' offense will feel that loss.

A tough season for the Rams: Quarterback Matthew Stafford (0.97 WAR) may miss some time with a concussion. Sean McVay's squad has the fifth-least WAR lost to injury this season, but that number will skyrocket if Stafford can’t play.

The Chargers curse: Just as soon as WR Mike Williams (0.19 WAR) comes back for the Chargers, he leaves again after reinjuring his ankle. On a team that has lost the most WAR to injury, the fact that Williams is expected to miss several weeks again will only increase that total.

A big loss for the Browns: The Cleveland Browns put starting center Ethan Pocic on injured reserve this week. He had generated the second-most WAR and second-best PFF grade among centers this season, so this is a big loss for a team that has struggled so far. 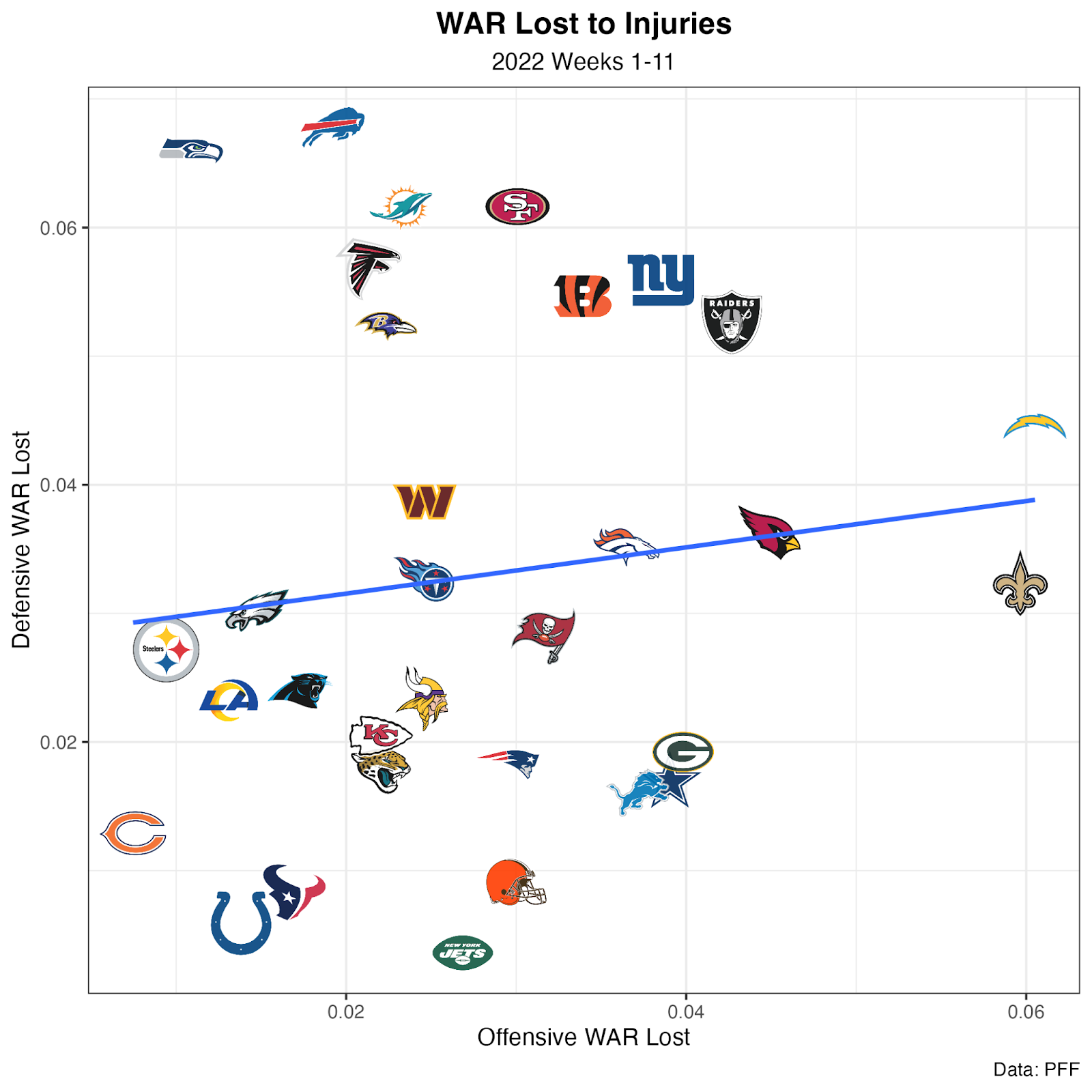 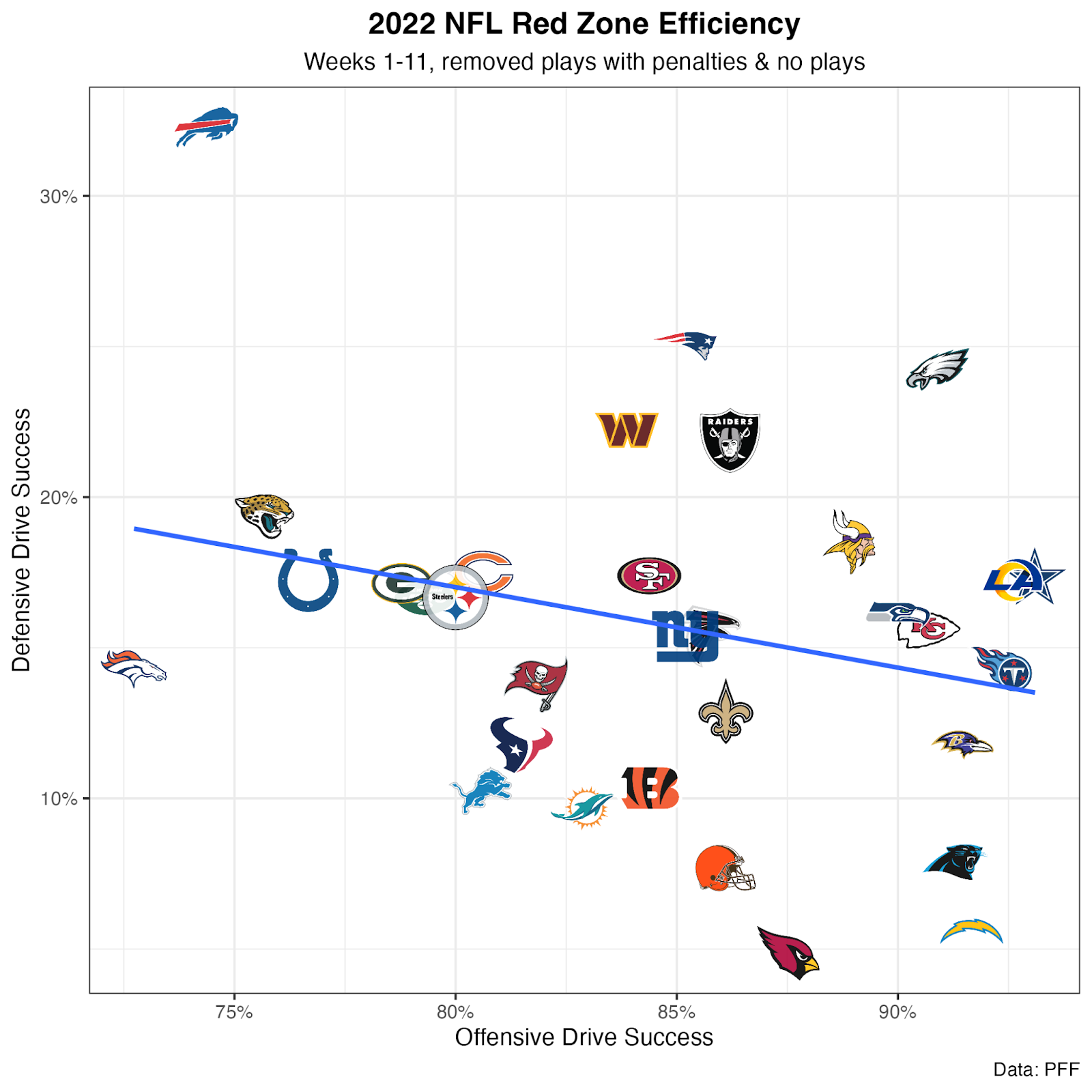 Bills keeping offenses out: Buffalo has far and away the best red-zone defense in the NFL this season. They stopped the Browns from scoring on three of their four red-zone drives in Week 11.

Cowboys on a roll: Dallas boasts the league's best red-zone offense, as 93.1% of their drives are successful. They have the highest-graded red-zone rushing attack in the league (79.1) and have generated the fifth-most EPA per play in the red zone this year (0.204). 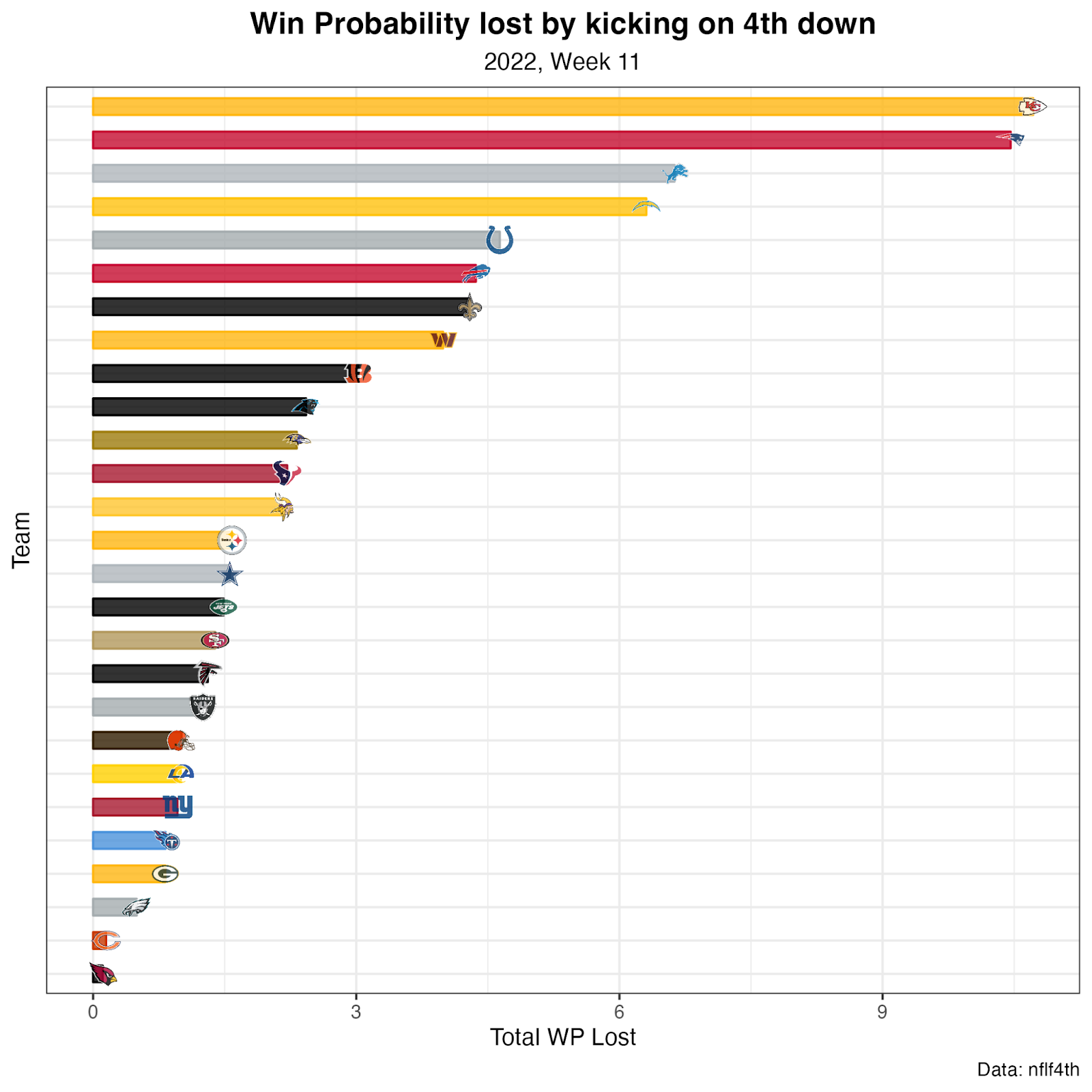 A forgettable day in Foxboro: Despite punting seven times against the New York Jets in Week 11, the New England Patriots were still able to eke out a win … and their best punting grade of the year (83.8). Combined, both teams punted the ball 17 times. Yeah, you read that right.

The Colts couldn't finish: The Colts' last three drives ended with a fumble, a field goal and a turnover on downs. It can’t get much worse than that. They could have been more aggressive on fourth downs to force the Eagles to score again.

The Lions sticking to their plan: Detroit's surprising win over the New York Giants included five punts from Dan Campbell's men, tied for a season-high. While their fourth-down decisions didn’t hamper their victory, they could have further increased their lead. These small decisions add up and can be a difference-maker in close games.

How a team finishes can tell you a lot about their tenacity and ability to close out important games. So, we looked to quantify this facet of the game using play success, or the ability to convert to a new set of downs and score. 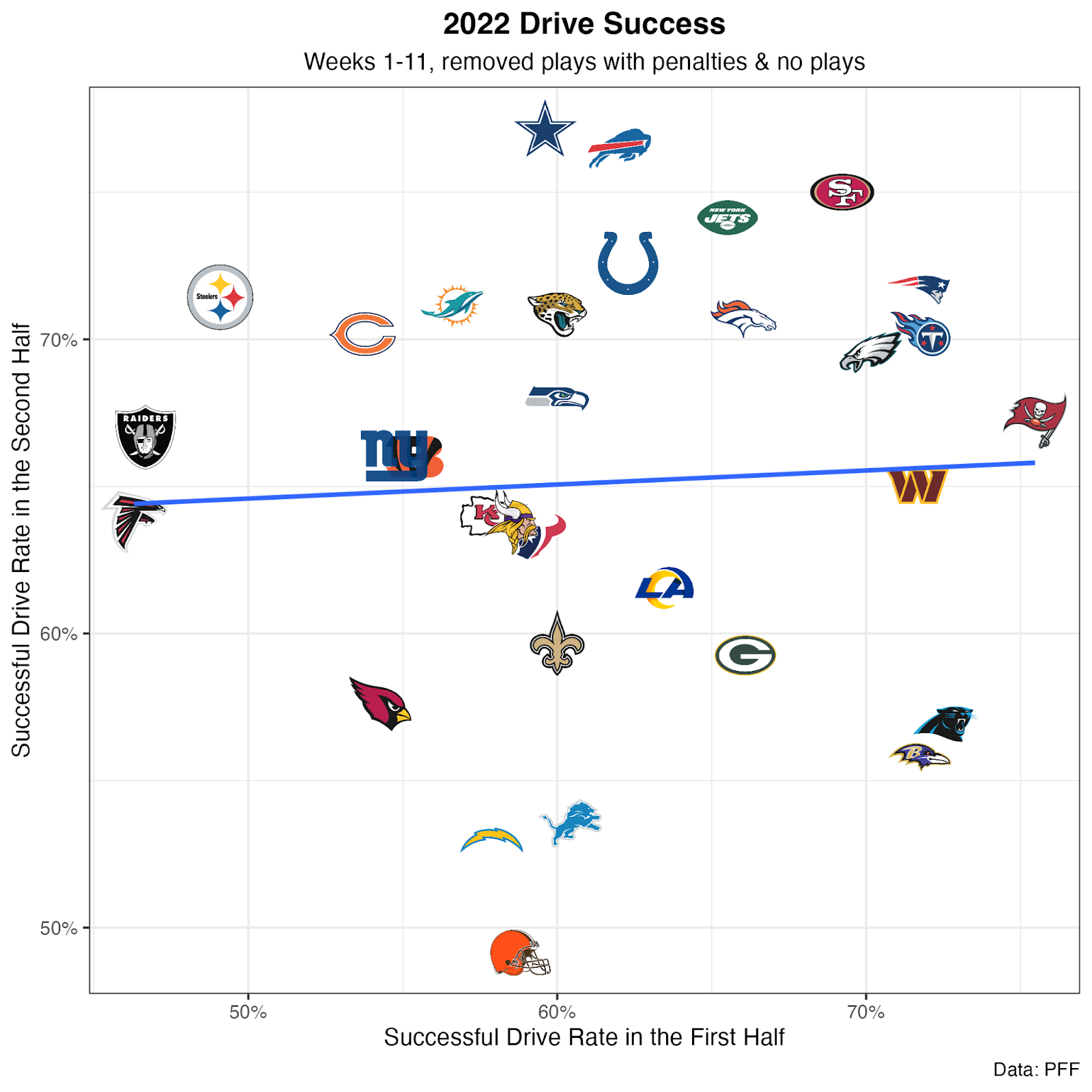 The Chargers need to finish stronger: The Chargers have now lost multiple games because of their offense's inability to move the ball in the second half. While Justin Herbert & Co. can jump out to an early lead — as they did against the 49ers and Chiefs — they struggle to be efficient in the second half of games.

Dak Prescott getting on with it: On the flip side, the Cowboys possess one of the best second-half offenses in the NFL. Whether that is the coaching staff making halftime adjustments or Dak being able to read defenses better with a whole half of play under his belt, they’ve been really efficient on a per-drive basis in the second half of games.