Predicting the 2022 NFL MVP: Patrick Mahomes is another week closer to MVP honors

• The clear favorite: Patrick Mahomes currently has a 44% chance of winning the MVP Award, making him the favorite at this point in the season.

• Josh Allen still in the race: Buffalo is only one game away from the No. 1 seed in the AFC, as they have already won the tiebreaker against the Chiefs.

• A $10 bet on Mahomes to win MVP would return $16.25 at BetMGM — qualified bettors from Kansas will also get a free PFF+ subscription and $200 in free bets!

With Thanksgiving upon us, the race for the 2022 NFL MVP Award is about to enter its final stretch.

With just seven weeks of the regular season left, Patrick Mahomes, Jalen Hurts, Tua Tagovailoa, Josh Allen, Lamar Jackson and Joe Burrow are all trying to help position their teams for the playoffs. So, how do the MVP odds stack up going into Week 12?

Every week throughout the season, we will rank quarterbacks by their estimated MVP chances. These chances are based on simulating the remaining season and looking at individual efficiency stats and team success. The full methodology can be found in our initial version of this year’s MVP rankings. 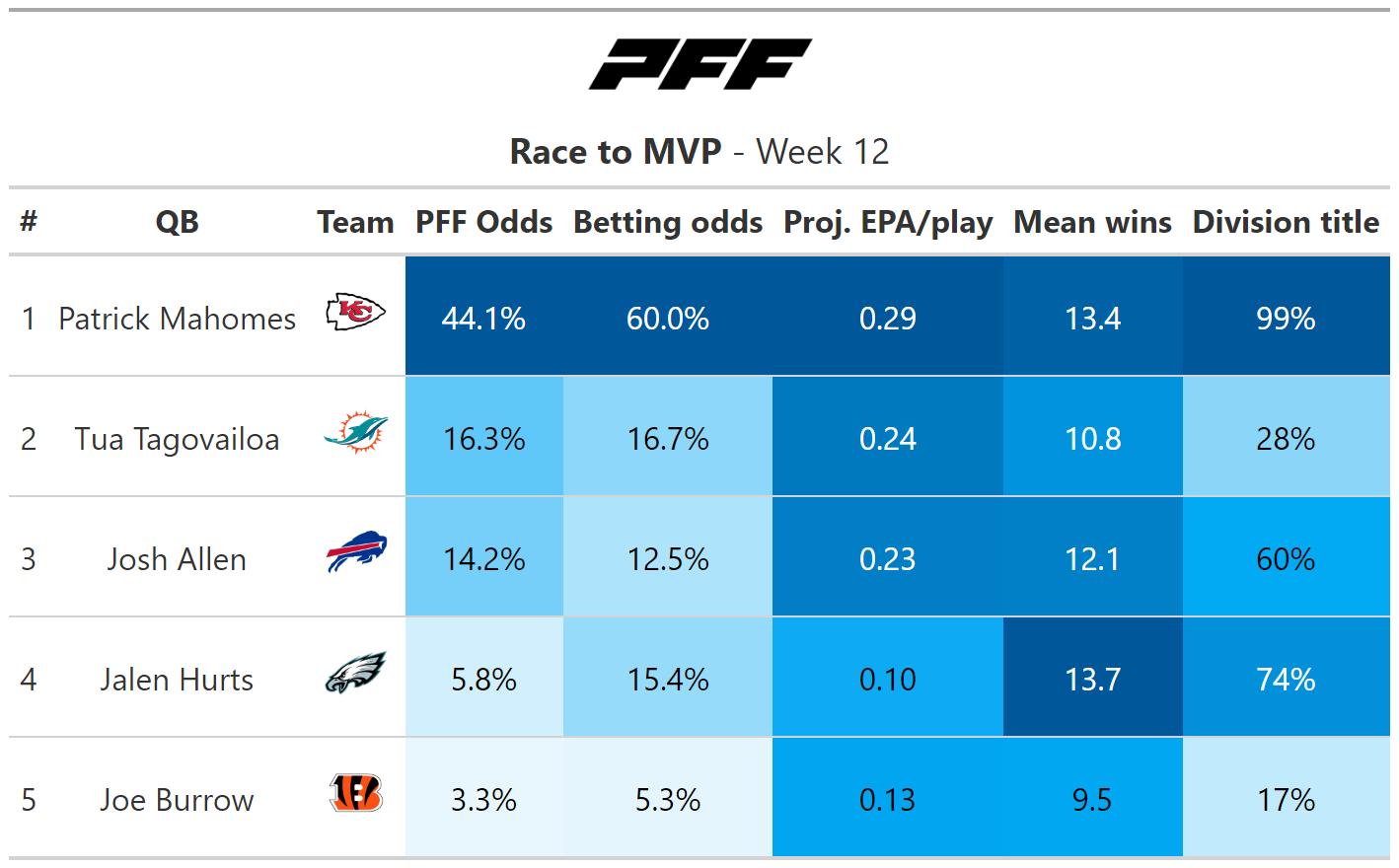 Mahomes' Week 11 performance makes him the clear favorite heading into Week 12. In fact, the Chiefs quarterback is even favored against the field right now, as his odds have shifted to -150 in some places.

We are slightly more uncertain and estimate his chances at roughly 44%, higher than all other candidates. It looks like the value of betting on Mahomes to win the MVP — which we emphasized all season — is now gone.

An underrated storyline might be how the new MVP voting procedure might favor Mahomes. He is arguably the least polarizing player in the conversation and will most likely be top-two on almost every ballot, while other players might be left out of some ballots entirely.

The Bills and Josh Allen bounced back in Week 11, and he might actually be slightly underrated in the MVP conversation right now. After all, Buffalo is only one game away from the No. 1 seed in the AFC, as they have already won the tiebreaker against the Chiefs.

Hurts and his Eagles narrowly beat the Indianapolis Colts this past week, which kept the third-year QB in the MVP conversation. The days of him being the favorite are now long gone, though.

Tagovailoa had a bye in Week 11, but he is now dependent on Patrick Mahomes having a few bad games. Tua moved from +350 to +500 despite not playing, mostly because of the Chiefs quarterback.

Our rankings also adjust for defenses faced. Quarterbacks who face easier defenses are more likely to put up stats that will eventually help win them the MVP award. We will update our pass-defense rankings throughout the season. 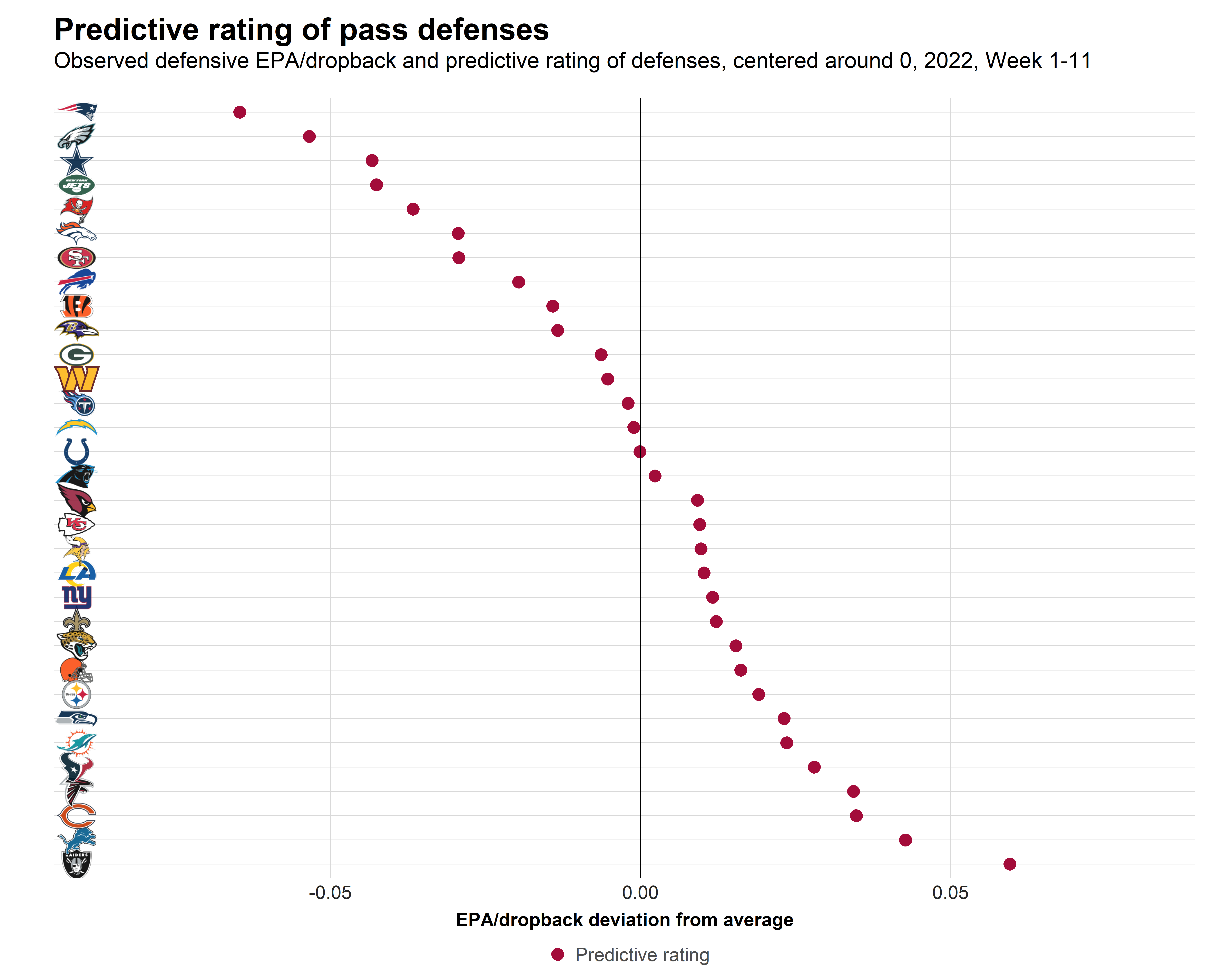 Using these rankings, this is the past strength of schedule of opposing passing defenses for quarterbacks: 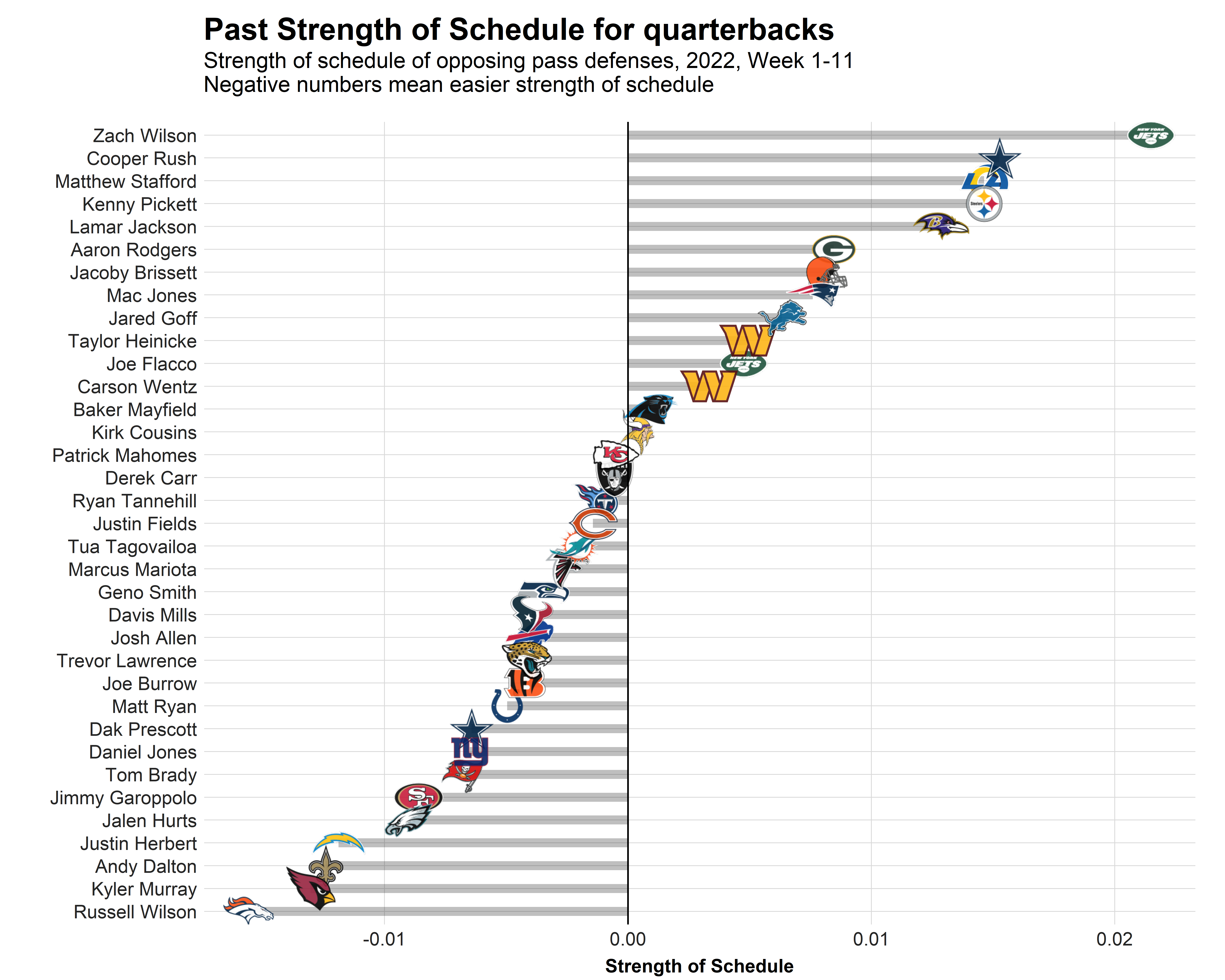 This is the future strength of schedule of opposing passing defenses: 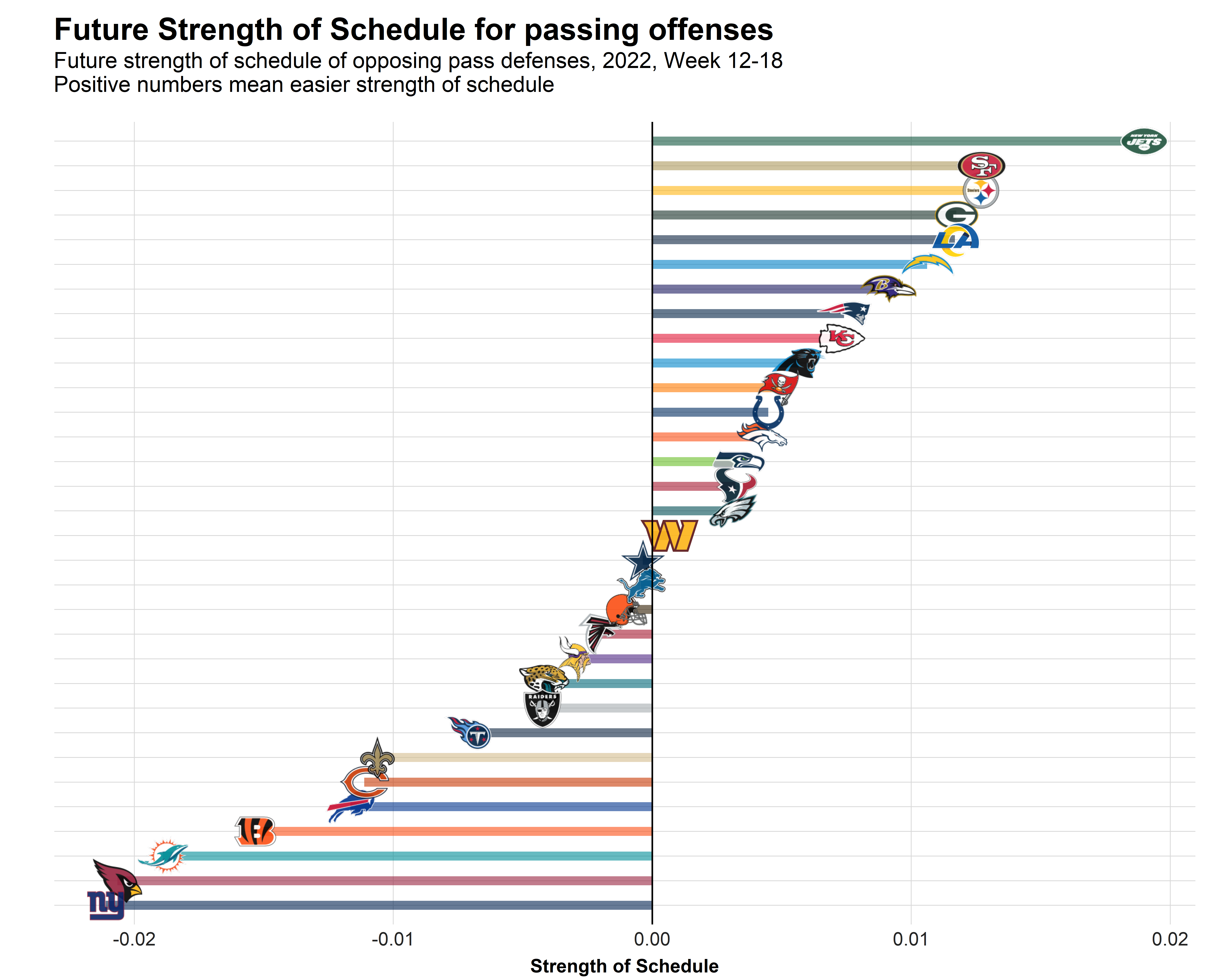