The top 10 wide receivers through Week 12

Checking in with the top graded wide receivers as we approach the full weekend slate of Week 12 in the NFL season. The top two have not changed since Week 7, as Pittsburgh Steelers WR Antonio Brown remains the league's top graded wide receiver through the 12 weeks of football. Unlike weeks past however, Atlanta Falcons WR Julio Jones is hot on his heels. 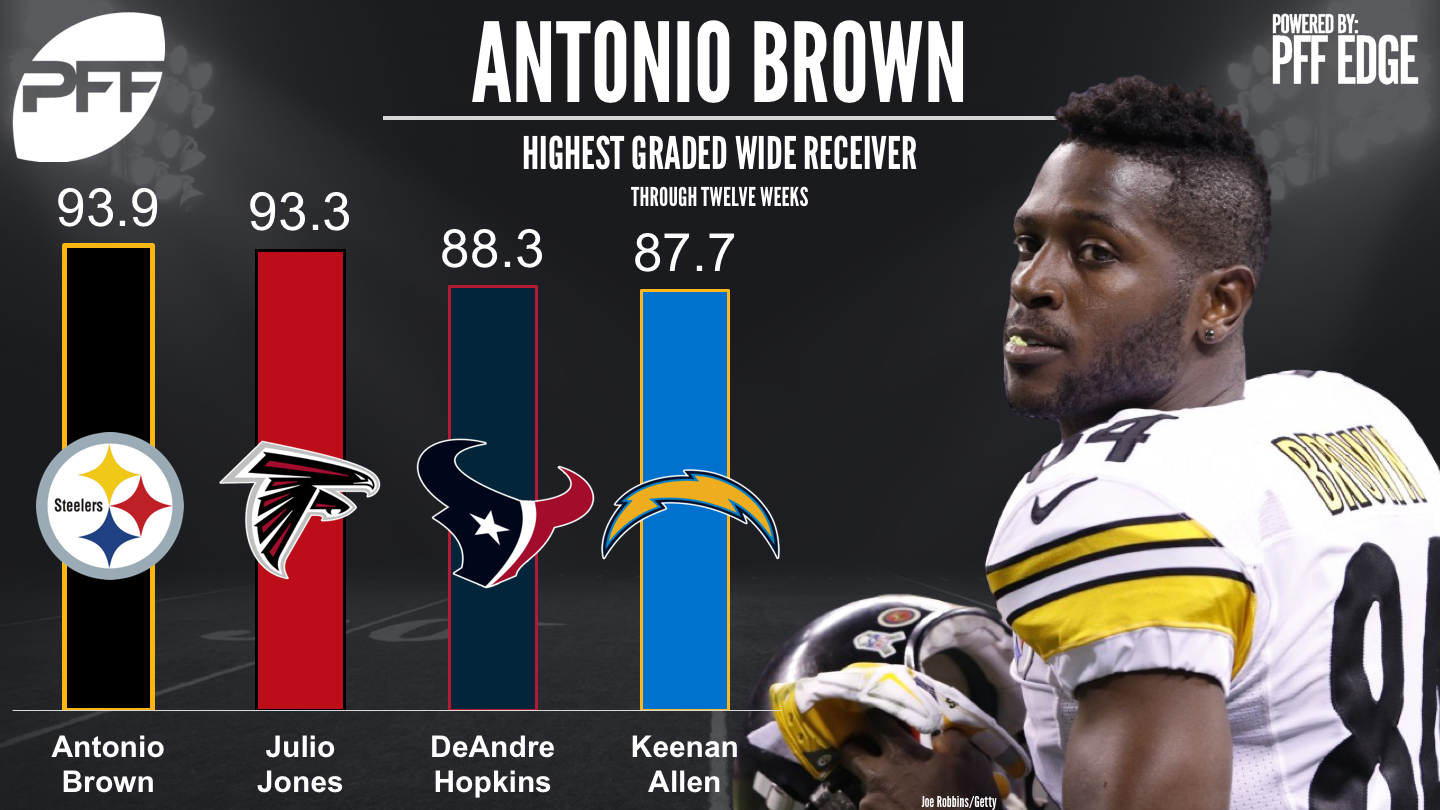 PFF Elite Stat: Brown is averaging 2.91 yards per route run this season, the second-most in the NFL among receivers.

Brown continues to be the best receiver in the NFL this season as he leads the league in both receptions and yards. Brown finally dropped a pass in Week 10, but since then has caught 20 passes for 313 yards and five touchdowns in two games. On the season, 46.0 percent of Brown’s targets have gone for first downs or touchdowns, an incredibly impressive number considering he’s been targeted a league-high 124 times already.

PFF Elite Stat: Jones is leading the league's receivers this season with an average of 3.38 yards per route run.

Jones’ season didn’t really have the statistics that many expected from him this season despite being inside the top five graded receivers all year. That is, until his unbelievable 12-catch, 253-yard performance last week. Thanks to his ridiculous 4.42 yards per route run average over the last four weeks, Jones now leads the league in that category. 54 percent of Jones’ targets have resulted in an offensive success play, the eighth-best mark in the NFL.

PFF Elite Stat: Hopkins is averaging 2.40 yards per route run so far this season, tied for the fifth-best in the NFL.

Many thought Hopkins might fall off with the injury to QB Deshaun Watson, but so far he has helped hold up the Texans offense and keep them in the playoff hunt. The strategy seems to be force the ball to Hopkins at all costs, with his 45 targets since Watson was injured leading the NFL. Only 26 of those were catchable, and he has caught 24 of them for 398 yards and two touchdowns. Hopkins is still one of the most dangerous receivers in the league despite defenses knowing that he’s going to be thrown the ball 34.2 percent of the time he runs a route (second-most in the NFL).

No receiver has been hotter these past two weeks than Allen. He’s caught 23 passes on 27 targets for 331 yards and three touchdowns in two games. He’s dropped just one pass and forced a league-high seven missed tackles in that span. When Allen is targeted this season, he picks up a first down or touchdown 52.6 percent of the time, the third-highest rate among receivers with at least 40 targets. If he hadn’t dropped nine passes this season he would likely be even higher on this list.

PFF Elite Stat: Green’s 2.40 yards per route run average this season is tied for fifth (with Hopkins) in the NFL.

On an offense that has struggled all season long, Green has been somewhat of a lone bright spot for them. After being ejected in Week 9, Green has since caught 14 passes and averaged 2.67 yards per route run in that three-game span. Only four receivers are targeted as frequently as Green this season, with his threat rate (percentage of time targeted per route run) being 31.3 percent. Green also has a solid ADoT (average depth of target) of 13.6.

PFF Elite Stat: Thielen has a catch rate of 55.6 percent on deep passes (throws 20-plus yards downfield), the second-best mark in the league.

Thielen has been incredibly consistent all season long and has already posted career-highs in receptions, yards and yards after the catch. He still has five more games to play. Thielen has caught at least five passes in every single game to start this season, and is averaging 2.62 yards per route run this season, the third-most in the entire NFL. Thielen has 10 deep receptions this season (fifth-most) and 306 yards on those receptions (seventh-most).

Baldwin had a great four-game stretch from Week 7-10 in which he caught 27 passes for 349 yards, two touchdowns and no dropped passes. But in the two games since, Baldwin has caught just four for 65 yards and a touchdown, with his first dropped pass of the season. The Seahawks offense seems to go as Baldwin goes, as he’s been QB Russell Wilson’s most dependable receiver through the last few seasons. His yards per route run average of 1.80 is down from last year’s 1.92, and he’ll be hoping to bounce back down the stretch.

Thomas has been consistently good all season, but seems to actually be improving as the year goes on. Over the past three games, Thomas has 20 catches for 260 yards and has forced four missed tackles. He’s forced eight missed tackles on the year, and has gone 10 out of 11 games so far without dropping a pass (dropped two in Week 4). Over 51 percent of Thomas’ targets this year have resulted in a successful offensive play, the 12th-best percentage in the NFL.

PFF Elite Stat: Tate has forced 18 missed tackles this season, five more than second-most in the NFL among receivers.

Tate continues to be one of the most elusive after the catch receivers in all of football. He forces a missed tackle 27.9 percent of the time he has the ball, which is the highest rate in the NFL. He’s also averaging a very impressive 6.4 yards after the catch per reception. Tate has gained the 16th most yards in the NFL this season (698 yards) despite having an ADoT (6.6 yards) thank ranks 65th in the league.

PFF Elite Stat: Jackson has dropped just one pass on 44 catchable targets, the fifth-best drop rate among receivers with 40 or more targets.

Jackson has seemingly reinvented himself this year, something not many receivers can do at his age. He’s turned himself into more of a middle of the field receiver, catching 23 of his 43 receptions this season between the hash marks. He also has the second highest ADoT in the NFL at 17.0 yards, despite having just five deep receptions this season. He’s doing most of his work in the intermediate game, as his 13.8 yards per reception and 4.0 yards after catch per reception would both be career lows for him.