While our 0-100 player grades receive all the attention, the work that goes into the metrics is derived from plus-minus grades awarded to every player on every play of every game. We chart each of the player’s plays with a score from -2.0 to +2.0 and normalize the raw scores to create 0-100 grade for ease of understanding. For offensive linemen, specifically in the run game, the plus-minus scores are valued significantly. 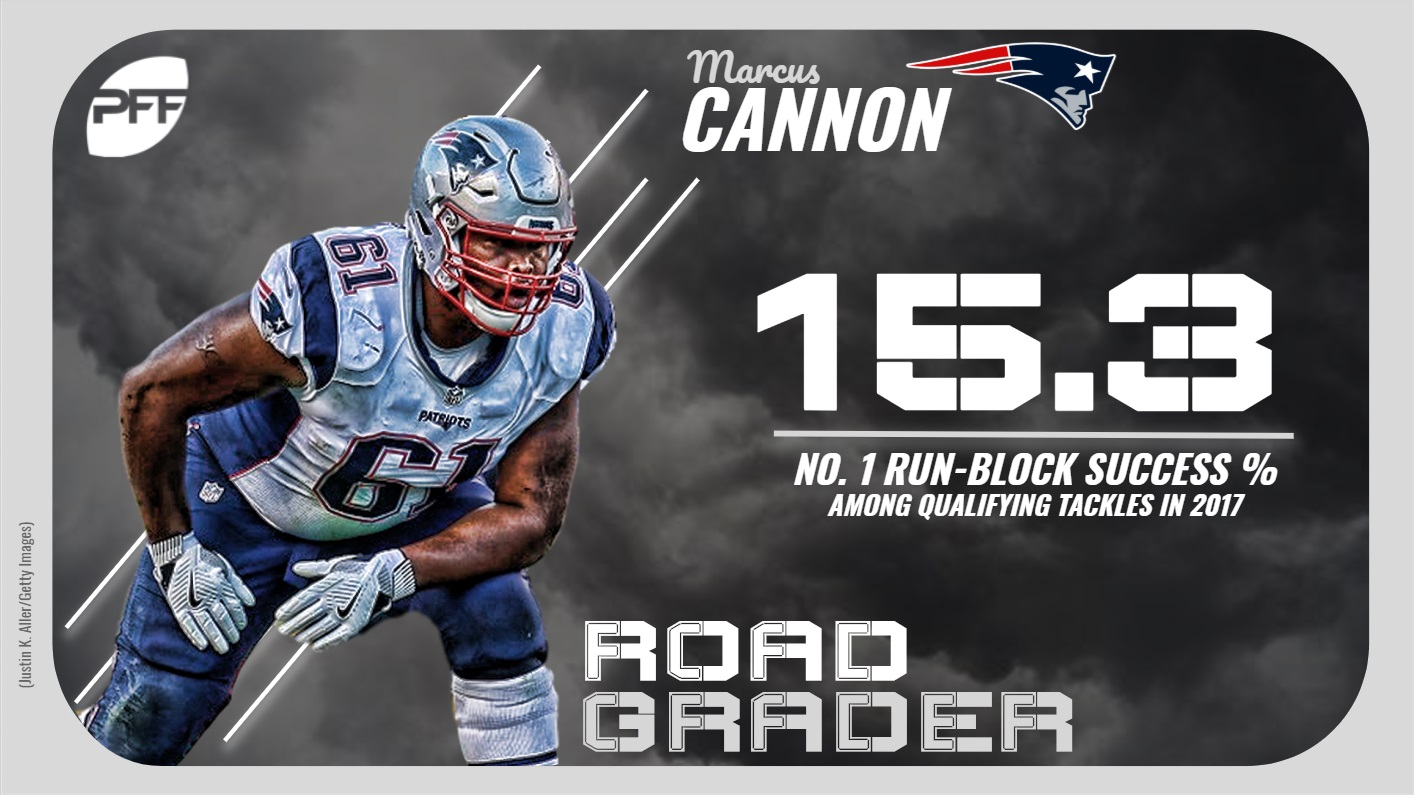 Coming off a career year (88.0 overall grade) in 2016, New England’s Cannon picked up right where he left off in 2018, as he put together a dominant eight-game stint, specifically in the run game, to start the season. Unfortunately for Cannon, those eight games were all that he played.

Cannon suffered a severe ankle injury in the Patriots’ Week 8 contest against the Los Angeles Chargers, ending what was bound to be another stellar campaign for the seven-year veteran. He recorded the second-highest run-block grade (88.8) and top-ranked run-block success percentage (15.3) across his 189 run-block snaps in Weeks 1-8.

Projecting Cannon’s success after his injury is a risky endeavor, but his sheer dominance as a run blocker in both 2016 and 2017 creates for a high floor in 2018. Even if his health permits, he may not match his 15.3 mark across a full 16-game season, but it’s unlikely his play in the trenches drops off by a significant margin.

Aging like a fine wine, the 35-year-old Penn has had some of his best NFL seasons in his four-year stint with the Raiders, leading by example in both pass protection and the run game.

Still recovering from a foot injury suffered toward the end of last season, Penn has taken a backseat to first-round rookie Kolton Miller in most of the OTAs and minicamp. However, if healthy, Penn is clearly the better option for Oakland in 2018.

Like Penn, San Francisco’s Staley hasn’t let his old age affect his play in the latter stages of his NFL career, as he’s earned overall grades of 81.1 or higher in each of the past six seasons as the team’s primary blindside protector. His run-blocking, of course, has followed suit.

Staley has recorded a run-block success percentage north of 13 percent in three of the past four seasons, including his 13.3 percent mark in 2017. Perhaps more impressive, Staley’s elite efficiency has all been recorded across 300 or more run-block snaps in all four seasons, a testament to his consistency and the sustainability of his high-end play.

Representing the 2017 draft class by himself, Dawkins is the only rookie, regardless of position, to rank inside the top-five in run-bock success percentage – a good sign for the future of the Bills’ offensive line.

Dawkins’ rookie campaign wasn’t without flaw, as he experienced some growing pains against some of the league’s best edge defenders in pass protection. However, where he remained consistent was the run game, as evidenced by his 13.3 run-block success percentage and 79.5 run-block grade.

While Dawkins merely filled in for the oft-injured Cordy Glenn in 2017, he will surely take all of the first-team reps at left tackle this offseason and into 2018 with Glenn now off the roster.

Former Boise State product Leno has played 900-plus offensive snaps at left tackle for the Bears in each of the past three seasons, and after getting off to a slow start in 2015 and 2016, the seventh-rounder turned starter finally got over the hump in 2017.

Leno earned a career-high 80.4 overall grade this past season, ranking 15th among qualifiers. He also recorded a 12.4 run-block success percentage in 2017, which was also a career-high for the four-year veteran and ranked tied for fourth among offensive tackles with 150 run-block snaps.

The veteran Smith was dearly missed in the four games he missed due to injury last season, and deservedly so. 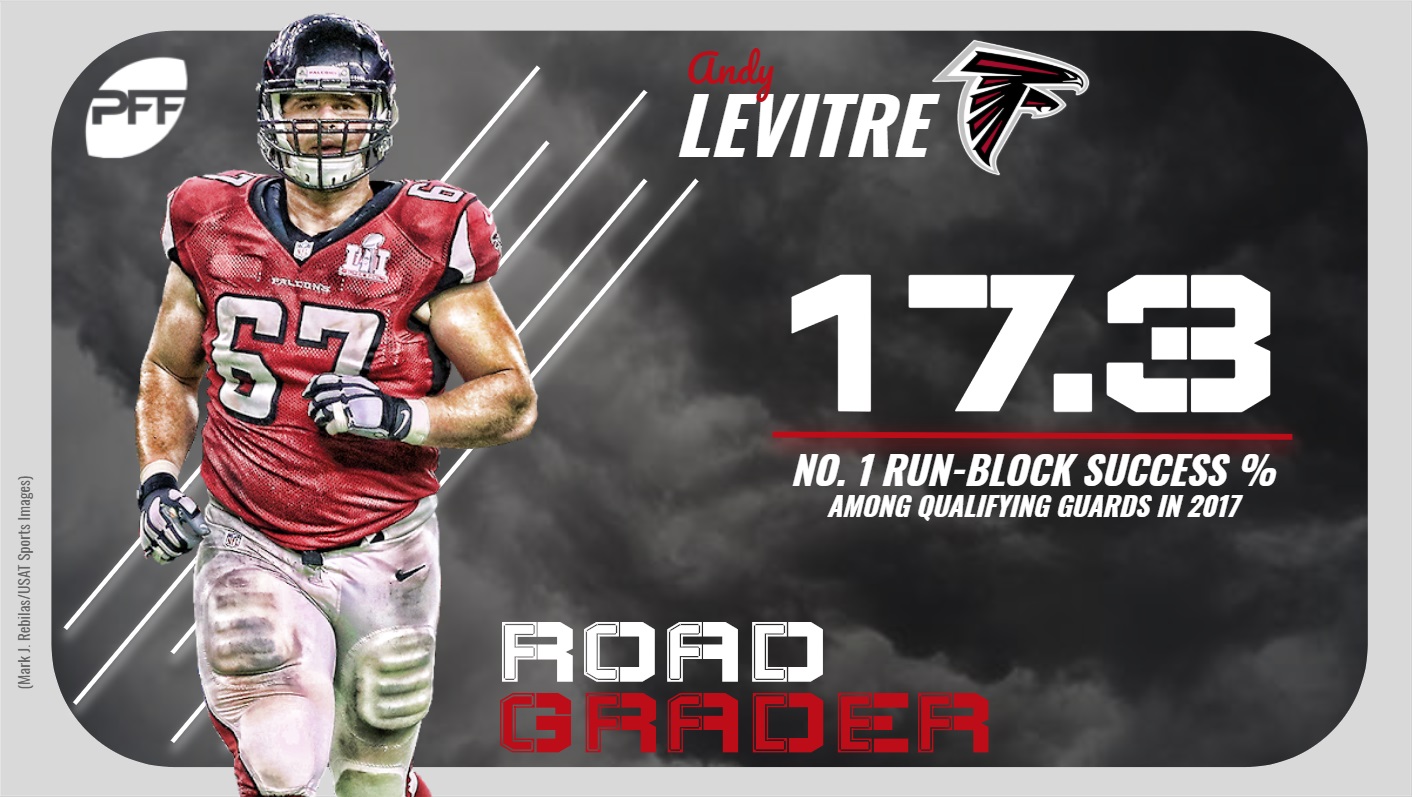 Nine-year veteran Levitre, a former second-round pick out of Oregon State, has flown under the radar as one of the league’s most consistent guards through three different NFL locker rooms, including his latest destination in Atlanta.

Two years into a six-year, $48.5 million contract with the Tennessee Titans, Levitre was shipped off to the Falcons in exchange for sixth-rounder and a future conditional pick despite earning 84.4 and 78.6 overall grades in his two seasons (2013 and 2014) with Tennessee. The Falcons’ brass was smart to take the deal.

Levitre has earned 78.0-plus overall grades in all three seasons with the Falcons while playing a combined 3,048 offensive snaps. And while his pass protection hasn’t been awful by any means, Levitre’s run-blocking takes the cake as his best attribute. Prior to being placed on injured reserve with a triceps injury, Levitre posted a 17.3 run-block success percentage across 412 run-block snaps in 2017, the highest mark among guards with at least 150 pass-block snaps.

Slotted as our No. 40 overall player in the NFL entering the 2018 season, DeCastro put together a career year in 2017, eclipsing previous career-highs in pass-blocking efficiency and run-block success percentage.

After playing just 553 offensive snaps across the 2015 and 2016 seasons, Smith played 511 snaps at guard and another 167 at center for the Bucs due to several injuries along the offensive line in 2017. And to Smith’s credit, he took the added responsibilities in stride.

Smith earned a 79.0 run-block grade, which ranked tied for 13th among qualifiers, and a 16.8 run-block success percentage in 2017.

While Tampa Bay surely hopes to groom former Humboldt standout Alex Cappa into a starter at guard in the near future, Smith’s success last season combined with his ability to perform admirable at multiple positions should keep the coaching staff from moving too quickly with the Cappa movement.

Amid an injury-plagued 2017 season, Long recorded a career-low 73.0 overall grade across 447 offensive snaps at right guard. However, he still maintained his run-blocking prowess through the injuries to add thicker silver lining to what was a down year for the five-year veteran.

Long recorded a 16.7 run-block percentage in 2017, which stood 2.8 percentage points above his career average. He also earned a 76.6 run-block grade, which ranked 20th among qualifying guards.

Injuries have cost Long the majority of the past two seasons, but his play when healthy is up there with the best offensive linemen in the league.

Scherff, Washington’s fifth overall pick in the 2015 NFL Draft, has improved his play in each of the past three seasons, leading to a career-high 83.2 overall grade in 2017. Scherff’s run-blocking, however, has been outstanding from the start.

Scherff recorded a career-high 17.2 run-block success percentage as a rookie in 2015 and maintained high marks in the following two seasons, as he scored a 15.3 and 16.1 in 2016 and 2017, respectively. Looking at just last season, the 6-5, 319-pounder mauled his opposition in the trenches to earn the fifth-ranked run-block grade among all qualifying guards (87.2).

Washington’s brass bought themselves time by exercising Scherff’s fifth-year option in his rookie contract, but seeing how much Dallas Cowboys guard Zack Martin got paid this offseason, it won’t be long before Scherff breaks the bank in a similar fashion. 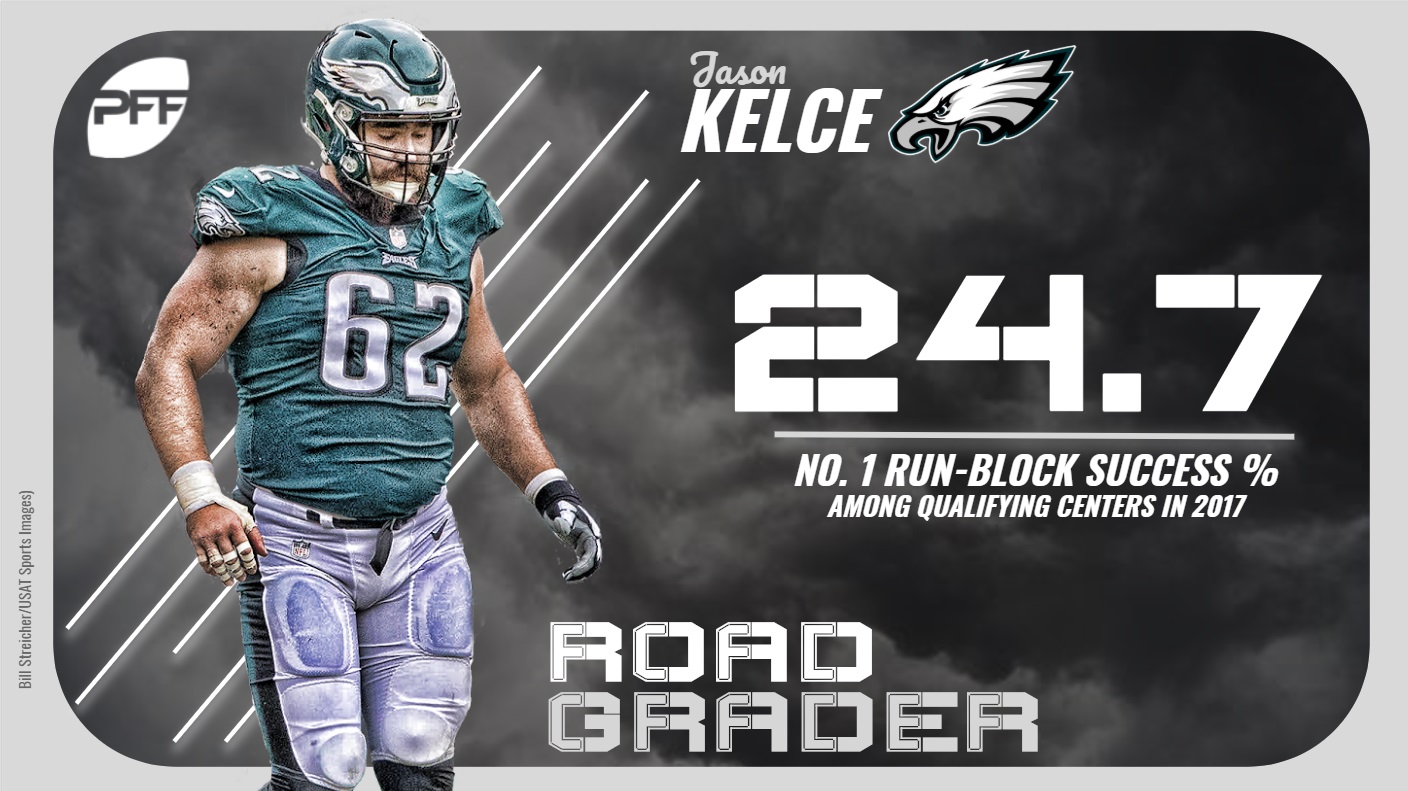 Cast in the shadow of his older brother Travis, the Eagles’ center has been overlooked most of his career, as the former sixth-round pick out of Cincinnati recognition for his consistent play prior to the Eagles’ Super Bowl run in 2017. Of course, Kelce put together a career performance across 18 games to pull the recognition he deserved and help his team hoist the Lombardi Trophy.

All leading to a career-high 91.3 overall grade, Kelce recorded a league-high 95.1 run-block grade and 24.7 run-block success percentage, the latter of which being four whole percentage points above the next center on the list. In simpler terms, Kelce was the best run-blocking center – if not the best run-blocker overall – last season, and even his most notable colleagues didn’t even come close to his run-game dominance.

After seven years with the Cleveland Browns, former first-round pick Mack eyed greener pastures in the 2016 offseason, voiding his contract to sign a five-year, $45 million contract with the Falcons. Mack has since proved well worth his contract through three years, earning career career-high overall grades in each of the past two seasons and paving the way for Atlanta’s ball carriers.

The centerpiece of Dallas’ star-studded offensive line, former Wisconsin standout Frederick hit the ground running after going 31st overall to Jerry Jones and company in 2013, as he’s earned 84.0-plus overall grades in all five of his NFL seasons and played 100 percent of the team’s offensive snaps across the five-year span.

Though tasked with playing guard to the tune of 259 offensive snaps last season, Whitehair still predominantly played center and played extremely well at the position in 2017.

Whitehair ranked fifth in run-block grade (81.8) and fourth in run-block success percentage (17.6) in 2017, keeping pace with his high marks from a year ago. The second-year Kansas State product did take a major step back in pass protection, as evidenced by his 39.4 pass-block grade, in Year 2 of his NFL career, but if he can return to his rookie form in that regard, he’ll be back on track as one of the league’s top young centers.

Prior to going on injured reserve with a knee injury, Marpet played admirably in his first season as the team’s full-time center, recording a 79.0 overall grade and the sixth-ranked run-block grade (81.4) among qualifiers.

Marpet also recorded a 16.5 run-block success percentage to rank fifth among centers with at least 150 run-block snaps this past season. His 16.5 mark, however, stands as a career-low for the three-year veteran, as he recorded percentages above 18.0 in both of his first two seasons in the NFL while playing guard.

With former Baltimore Ravens center Ryan Jensen now in Tampa Bay, Marpet will likely move back to guard to pick up where he left off in previous years and maintain his run-blocking efficiency after a one-year stint at center.