Projecting the top-10 most expensive free agents in 2019

Partnering with Over the Cap Founder Jason Fitzgerald, we at Pro Football Focus have put together a list of the 10 pending unrestricted free agents expected to break the bank in 2019.

[Editor’s Note: All ELITE subscribers can access the grades and advanced statistics below on all of the pending UFAs in Premium Stats 2.0. To sign up for ELITE – Monthly or ELITE – Annual, click here.] 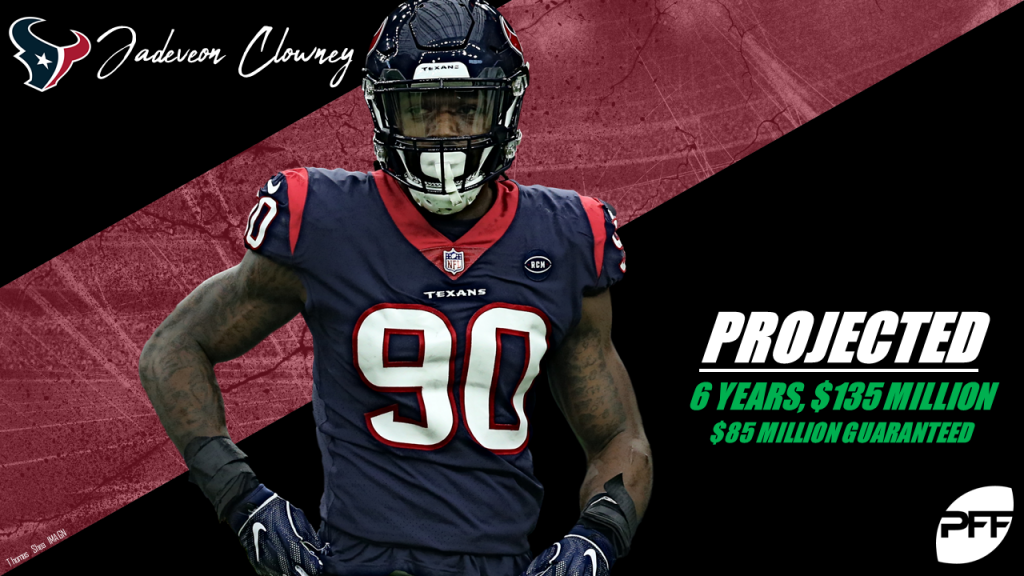 Coming off a career year in 2018, former No. 1 overall pick Jadeveon Clowney is bound for a massive payday whether he’s tagged or penned to a long-term deal this offseason. Largely propped up by his 91.2 run-defense grade, Clowney earned an 88.0 overall grade this past season, ranking tied for ninth among all edge defenders.

“Clowney has basically every soft factor going for him when it comes to earning a big salary as a free agent. His status as a former number 1 draft pick generally puts him in a class by himself. While we can argue statistics and production versus the rest of the edge rushers, his draft grade likely means that there is strong support on 32 teams that he is the best player available and by a wide margin…

The only downside for Clowney is that it is likely he will be franchise tagged, which always limits the market for a player. The Texans have ample cap room to carry a one-year deal with a big cap number and won’t be in any rush to negotiate that contract. Still, at the end of the cycle, he should be one of the highest-paid rushers in the NFL unless he decides to quickly sign a contract before the other players have an opportunity to set the market.” 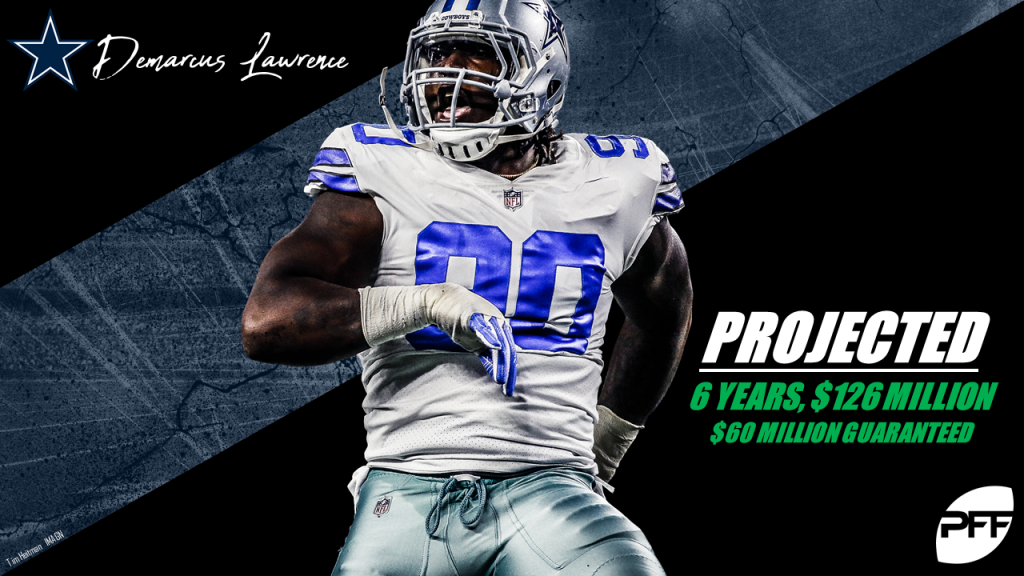 Forced to prove his worth again on the tag in 2018, Dallas Cowboys’ Demarcus Lawrence did just that, matching Clowney’s overall grade (88.0) and earning an impressive 82.7 pass-rush grade. He’s now earned high pass-rush and overall grades in each of the past two seasons.

“If there is one downside to Lawrence, it is the fact that he is a 70% playtime player. That does not mean another team won’t project him to be capable of an even larger workload but generally the largest contracts in the market see players with at least 80% playtime. Though the difference may seem small, that extra 10-15% can be a pretty big financial difference. The 30% situational player generally costs a good deal more than a player only expected to play 10-15% of the snaps. Lawrence should also benefit from his franchise tag costing Dallas $20.571 million this season. Dallas could certainly carry that figure, but it gives Lawrence much more leverage in demanding a high salary from Dallas as well as a real chance to actually hit free agency. Dallas has a large number of extensions to work on and may or may not have Lawrence marked as a priority.” 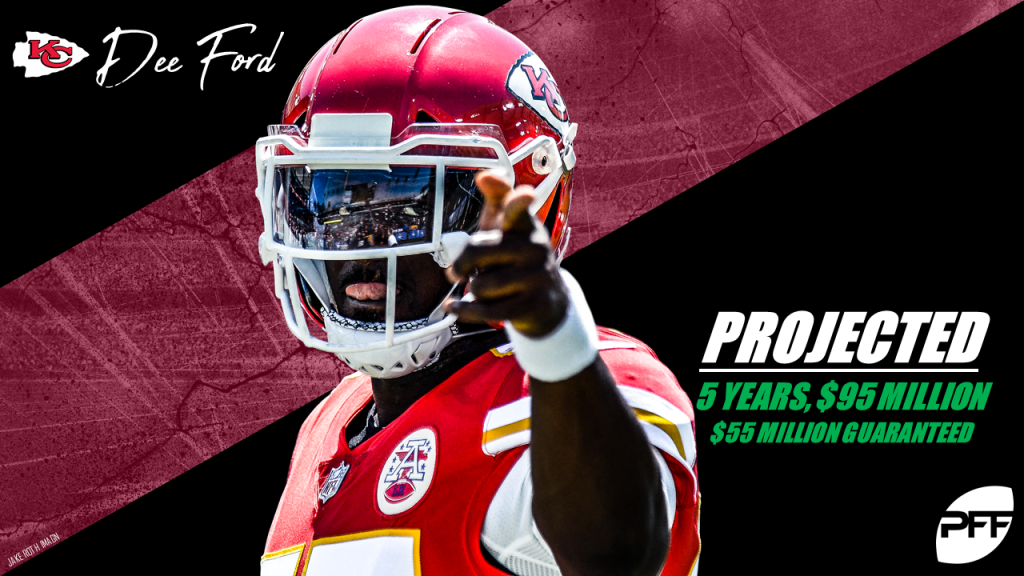 “Given Ford’s career arc, he will be a prime candidate for the franchise tag. That number could be difficult to carry for the Chiefs, who will have around $32 million in cap room if Kansas City wants to be active in free agency. That could help get a deal done earlier in the process. A difficulty for Kansas City is that prior franchise tag players (Justin Houston and Eric Berry) scored big contracts when tagged. Though they had different front office personnel at the time, their valuations last seasons for Sammy Watkins and Anthony Hitchens should have Ford asking for a lot.” 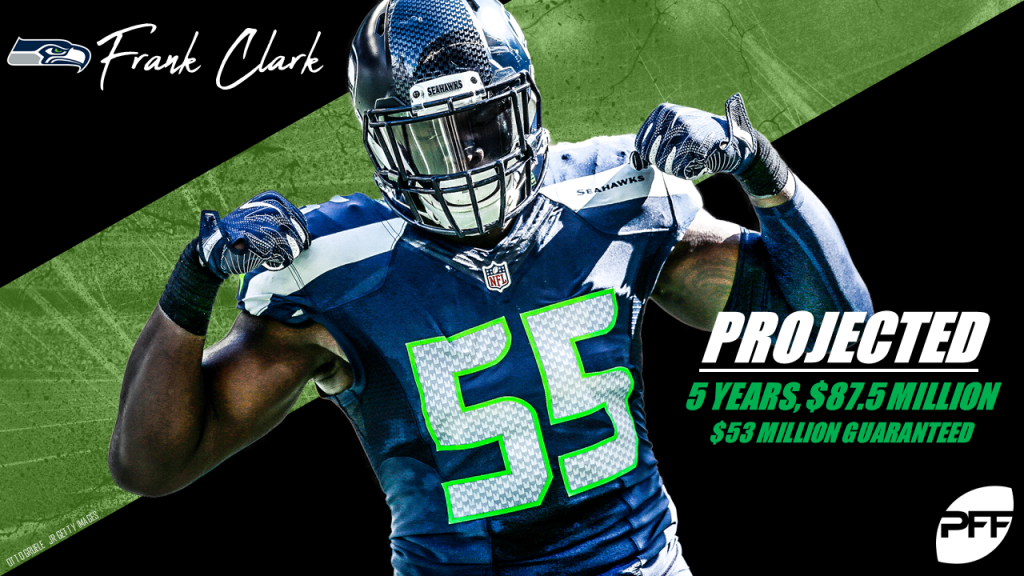 Though he ranked just 24th at his position in overall grade at season’s end, Seattle Seahawks edge defender Frank Clark still flashed enough high-end potential to warrant a top contract this offseason. He earned a 74.7 pass-rush grade in 2018, marking the third consecutive season he’s earned a pass-rush grade above 70.0.

“The player Clark will be most compared with is going into negotiations with the Seahawks is Danielle Hunter of the Vikings. That contract should be a non-starter, as Hunter signed one of the most team-friendly contracts in the NFL, but that is clearly what Seattle will first look for. Seattle has generally been proactive with their extensions, so this is unchartered territory but the most likely outcome here is a one-year franchise contract. Assuming he gets to market, he will likely sign for something in the $17 million range.” 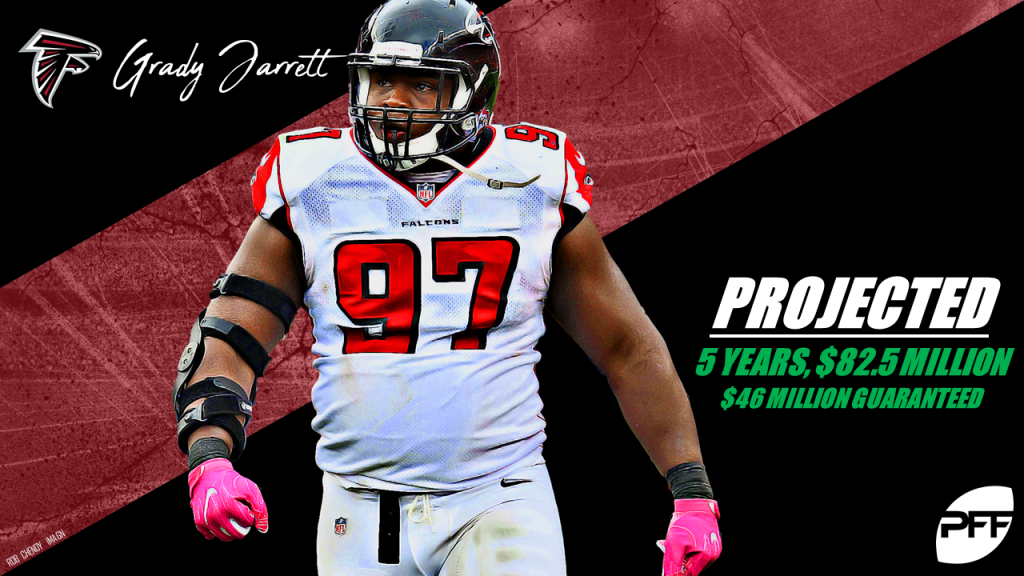 The first player on this list that isn’t an edge defender, Grady Jarrett has more than outplayed his fifth-round draft status in his four years in the NFL and is now very deserving of a significant pay bump. The former Clemson product earned 90.0 and 86.7 run-defense and pass-rush grades, respectively, en route to a career-high 91.0 overall grade in 2018.

“Jarrett may have an outside chance to hit the $17 million+ category this season. The current high water mark for players not named Aaron Donald is Fletcher Cox at $17.1 million per year with nearly $64 million guaranteed. You can’t compare Jarrett with Cox. Cox was a better pass rusher and a more impactful player. The Eagles were also heavily invested in him from day one. That said it is an outdated contract and with veteran’s like Geno Atkins and Jurrell Casey landing lucrative 3rd contracts there may be a case to be made that the market is growing.

The best comparable player for Jarrett is Malik Jackson of the Jaguars. They came from similar draft spots, were the same ages, and performed at similar levels. Jackson’s contract is also outdated and worth about $17.5 million if we adjust it for salary cap inflation. The blocks to hit that will likely be the Atkins deal and Kawann Short contracts which were signed in 2018 and 2017. Jarrett is younger but the impact production is harder to match against those players. They will likely be numbers to beat but probably block him from too significant a jump.” 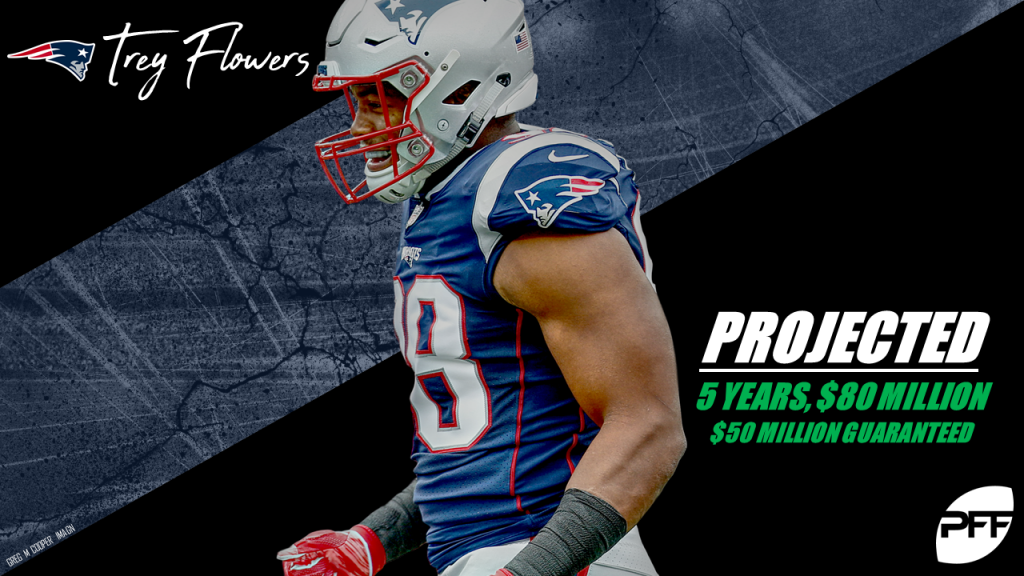 Like Jarrett, Trey Flowers is a former Day 3 pick that has panned out and then some for the 2018 Super Bowl champs. He’s improved his overall grade every season of his four-year NFL career and finished the 2018 season ranked sixth in overall grade at 89.7.

“The Patriots are not cap rich next season, as they'll likely have around $20 million in room before they start to make cuts, which makes tagging a player harder. They have a left tackle that they could use the tag on instead and in general the franchise tag has not been something that the Patriots really focus on. There is always going to be a feeling that the Patriots will get the option to match an offer which should benefit Flowers…

Like with Clark, the best comparable here is Hunter. If he does re-sign with New England before free agency begins that is probably going to be considered valid though whereas with other teams it might not. If he gets to free agency, he has a chance to have a very similar run as Vernon if he is indeed the only available pass rusher.” 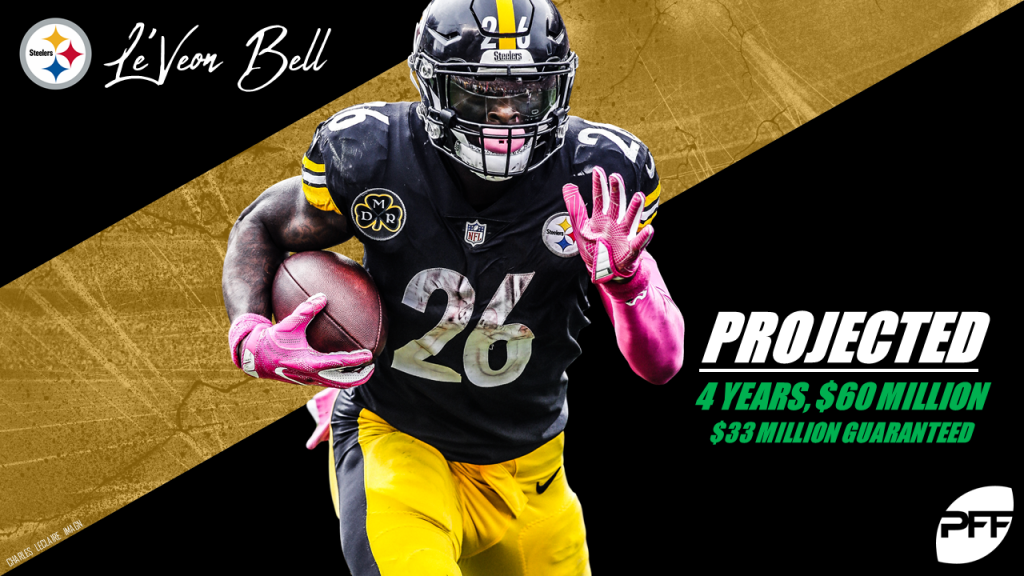 After sitting out all of 2018, veteran running back Le’Veon Bell will return to the NFL after resetting the market with his contract. He earned 71.0-plus overall grades in all five seasons he’s played in the NFL, including a career-high 89.7 mark in 2015.

“Bell comes with all kinds of red flags. He has had past injuries. He has had off the field suspensions. Nobody knows what kind of shape he is in. He has a lot of miles on his tires from his use in Pittsburgh. But he is dynamic and the best offensive talent that will be available this year. Given the amount of cap space a few teams have this year and how desperate those teams may be expecting someone to match his price but with a backloaded contract to give the team some added protection.” 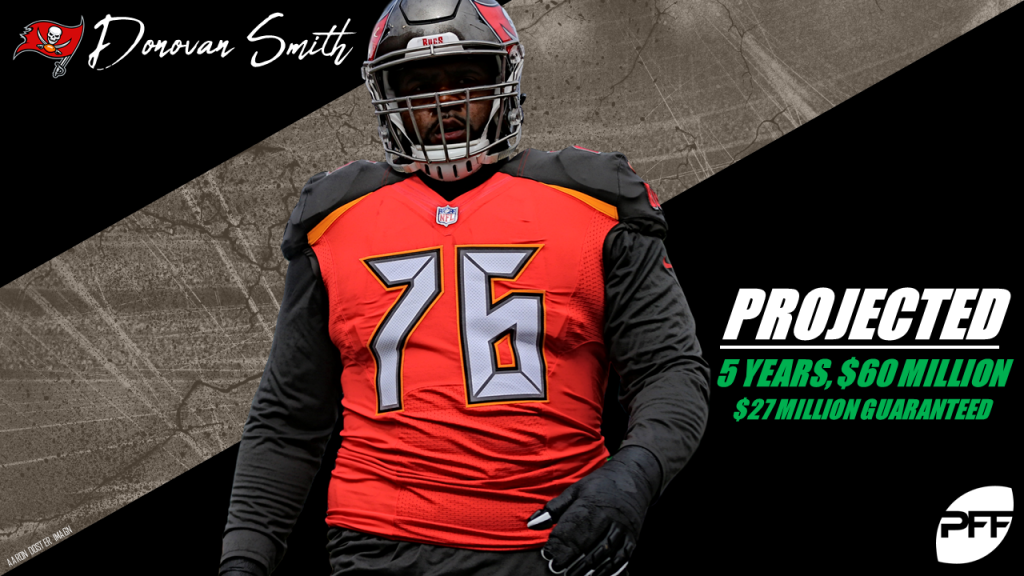 Though he isn’t the class of the position, Tampa Bay Buccaneers left tackle Donovan Smith plays a premium position and will get paid a premium price as a result. Durability stands out as a strength for Smith, as he’s played over 1,000 snaps in all four years he’s been in the league.

“The Buccaneers recently signed guard Ali Marpet to a contract worth about $10.8 million a year, and it is very rare for a left tackle to earn less than a guard on a team especially when the tackle signs after the guard. So that should set a floor for his value to remain in Tampa. There could be an outside chance that the Buccaneers tag Smith since they don’t have any other options but it’s pretty rare for a left tackle to be tagged. Usually, they either get a long-term deal or get the chance to hit free agency.” 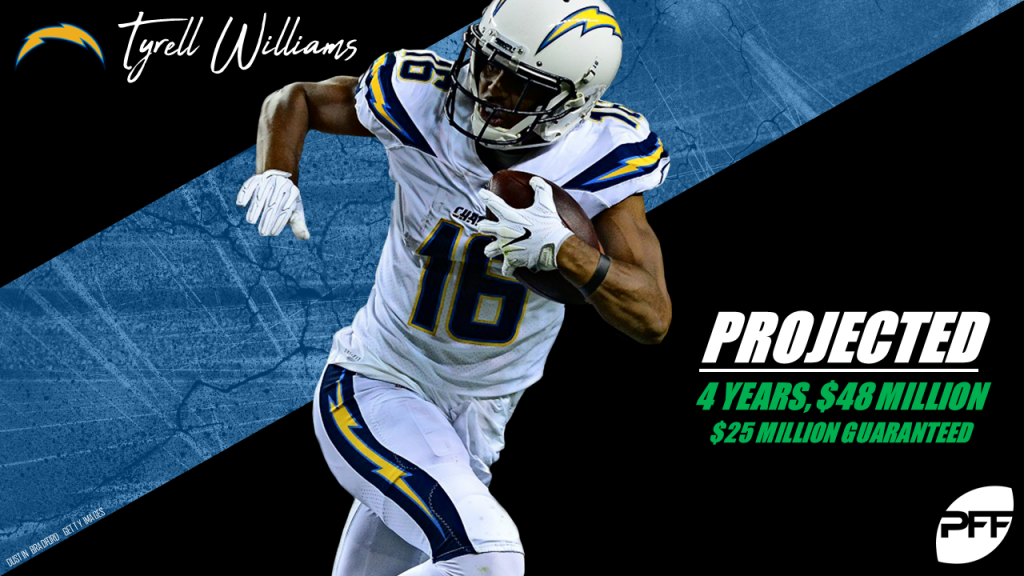 Mike Williams and Keenan Allen forced Los Angeles Chargers’ Tyrell Williams into a reserve role after his breakout 2016 season where he earned a career-high 75.6 overall grade. Teams should be highly interested in betting on the fact he returns to form in a bigger role.

“Every year there are surprises in free agency at this position. Last year were three big ones signing multi-year deals with Sammy Watkins signing for $16 million, Allen Robinson for $14 million, and Albert Wilson for $8 million. Good receivers rarely break free so when they do teams often treat them as superstars when they hit free agency. Williams has the size at 6’4” that teams covet and the ability to get into the end zone…

The Jets recently signed Quincy Enunwa to a $9 million a year contract and Enunwa at his peak was not as productive as Williams. Last year Enunwa finished with just 449 yards in 11 games. Williams is certainly going to get a contract better than that. Can he push into Allen Robinson territory?  Probably not but he should fit somewhere in between the two.” 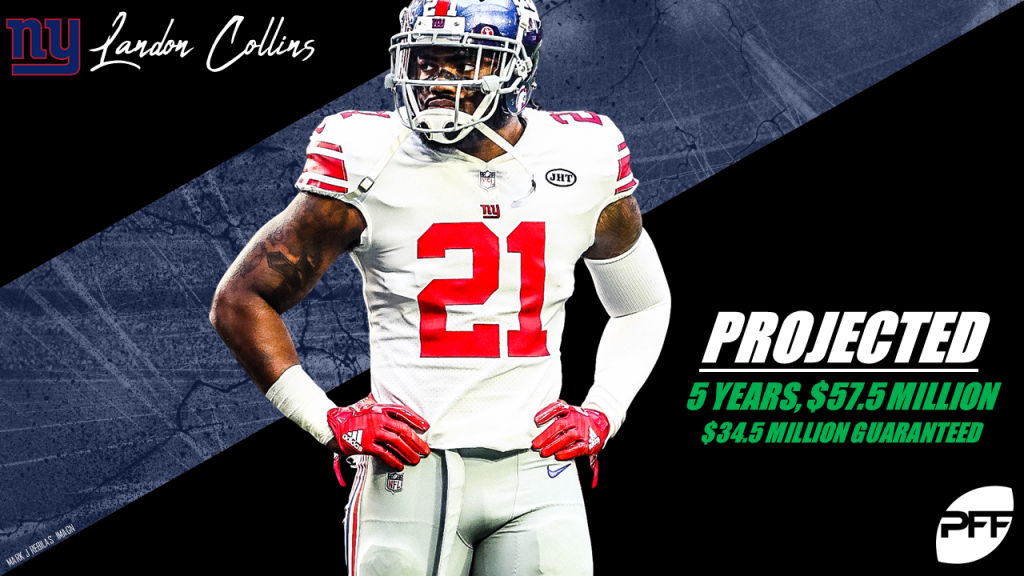 After earning 81.0-plus overall grades in Years 2 and 3 of his career, New York Giants safety Landon Collins fell to a 70.4 overall grade in 2018. He’s still more than proved he can be a game-changer at a position few teams have on their roster, so he should draw a pretty penny if he makes it to the open market.

“The franchise tag is certainly a possibility for Collins. The Giants will have the cap room to use it.  Collins could dig in on a contract given that the last time the Giants GM used the tag he eventually rescinded it and allowed the player to become a free agent when he realized they would not get a long-term deal done.  My guess is the sides will work off of the Harrison Smith contract that was signed in 2017 and more in line with the rest of the market at $10.25 million a year.”