The 2017 NFL regular season is officially over, which means there will be less talk of George's Savior from San Francisco and more about how much homefield advantage matters in the playoffs. While some mainstays like the Patriots, Steelers and Chiefs remain among the AFC’s best, eight of the 12 teams earning playoff berths this season were out of the hunt last year, including the top five seeds in the NFC.

Oddly, one of the league’s worst divisions (in our estimation) had two teams make the tournament, while the Buffalo Bills made the playoffs for the first time since 1999. The top three seeds in the NFC are playing quarterbacks that had previously struggled for Jeff Fisher’s Rams, while each of the three players quarterbacking the lower three seeds in the NFC have carried their teams to a Super Bowl appearance during their career.

With such uncertainty (at least on one side of the bracket), handicapping this season’s playoffs is going to be one of the most interesting tasks we’ve undertaken so far. Using our PFFELO system, as well our metrics that go into our weekly spread and over/under picks, we’ve simulated the playoffs a few thousand times to determine the probability of each team advancing past each round, as well as the probability of each team winning the Super Bowl. These will be updated each week to reflect the results from the previous week, culminating in our eventual pick during Super Bowl week. 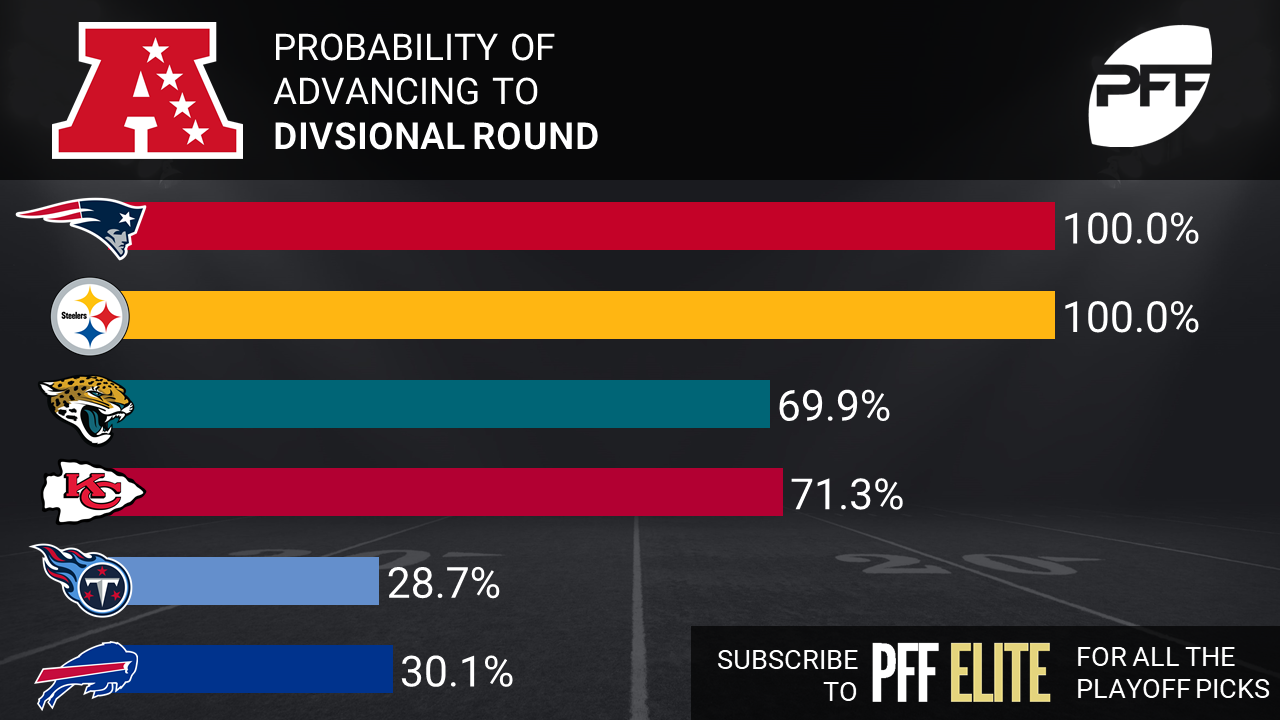 From about the middle of the season on, it was mostly a foregone conclusion that New England and Pittsburgh would receive the AFC’s first two seeds and their accompanying byes. The remaining first-round matchups in the AFC both appear to be 70/30 propositions for the home teams, with the Chiefs and their emerging offense looking to win their first home playoff game since 1993 against a Titans team that has struggled mightily over the season’s second half. Jacksonville, making their first postseason appearance since 2007, hasn’t been universally impressive this season, but does have the league’s second-best defense by our metrics, and are helped by what appears to be a serious injury to the Bill’s best offensive player, LeSean McCoy. 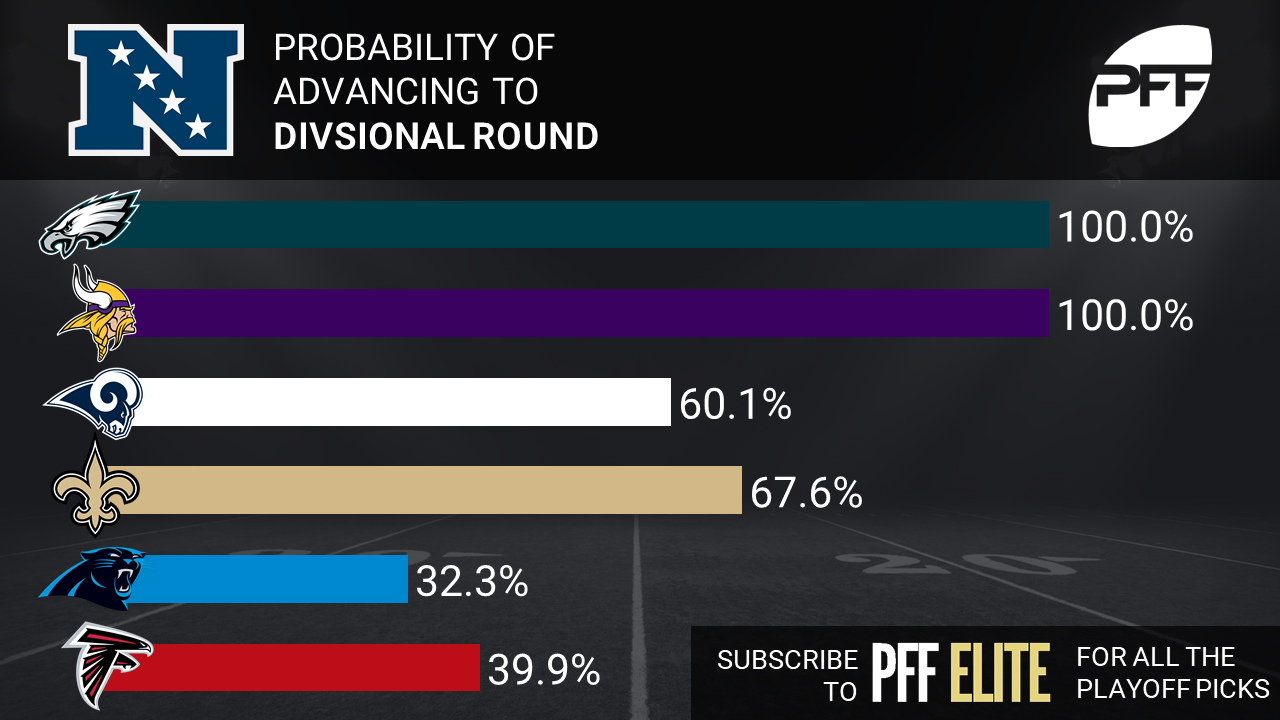 The Saints blowing a fourth-quarter lead in Tampa will add some fuel to the “it’s really difficult to beat a team three times in a season” narrative that attempts to set mathematics and rational thought back into the dark ages when the Panthers travel to New Orleans to try to avenge the “Boatrace on the Bayou” that we took as our Lock of Week 13. That said, it sets up a truly interesting matchup between a Los Angeles Rams team and their plus-coaching staff against the reigning NFC champs and their field goal-philic administration we seem to like against the spread every week. What we’ll see in latter rounds is a team that makes it out of that game has drastically different odds later on, with the Rams traveling to Minnesota to play a healthy Vikings team (a fate they tried their hardest to avoid) or the Falcons visiting a wounded Eagles squad in a battle for avian supremacy. 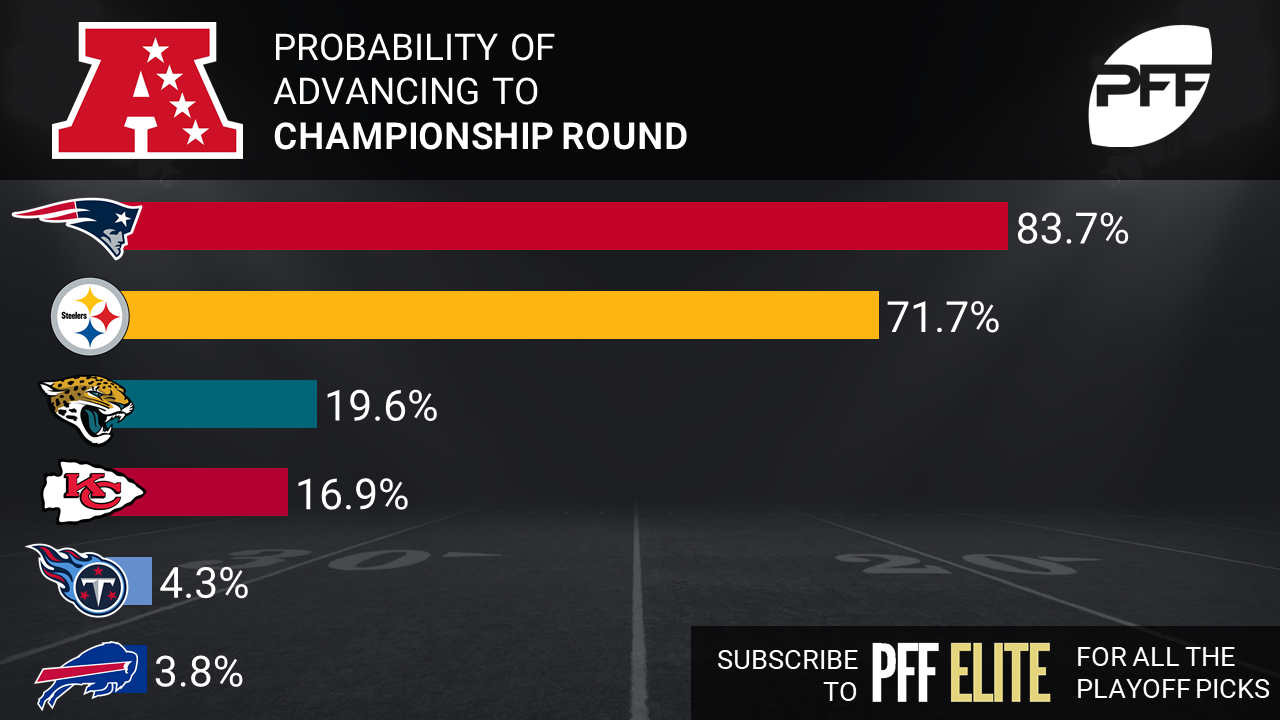 This is where the top-heaviness of the AFC shows itself, as the Patriots and the Steelers are substantial favorites against whoever they face to make the conference championship for the second-consecutive season. Jacksonville has better odds of advancing, should they win in the first round, than the Chiefs as they are more likely to play Pittsburgh in the second round, and Pittsburgh has a substantially lower PFFELO rating (1,721 versus 1,667) than the Patriots. A Buffalo victory in the first round would set up another “it’s difficult to beat a team three times in a season” scenario that is likely to send the trendsetters back to their TI-84s in search of a less idiotic angle for taking down the Pliable One. 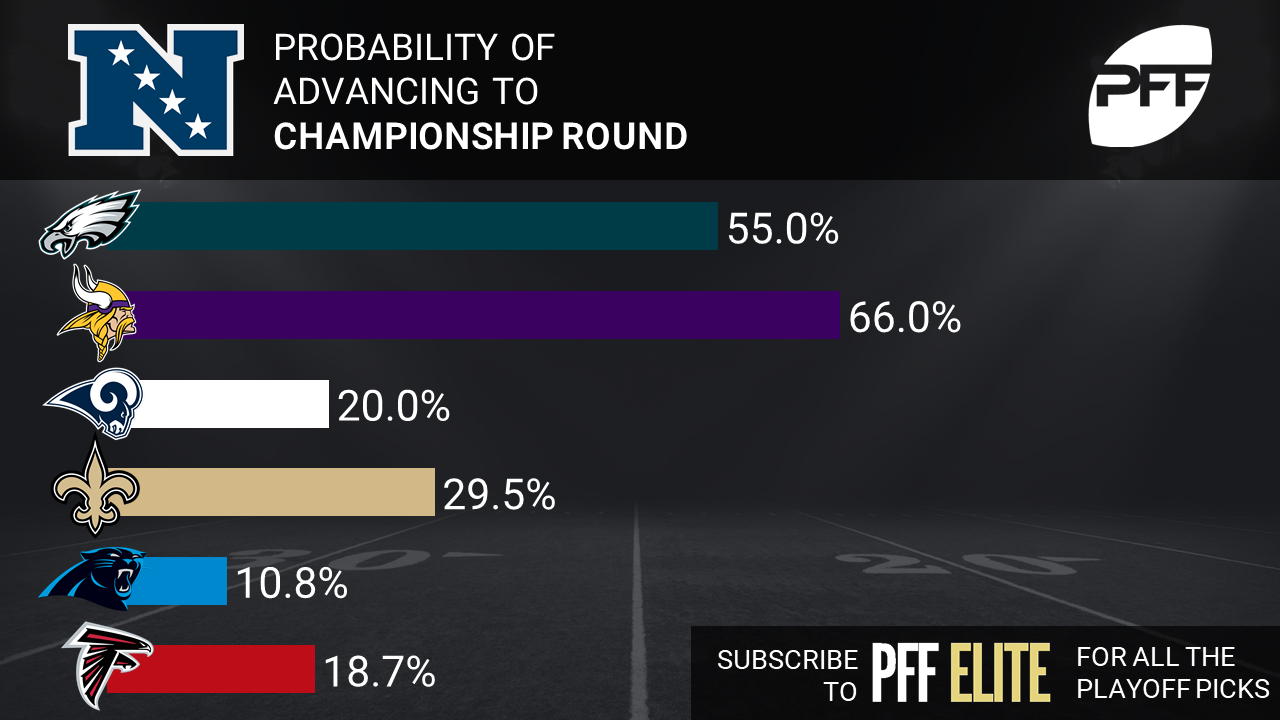 This is where things get interesting. Not surprisingly given the forward-thinking nature of their coach, the Rams knew their odds of making the Super Bowl were higher with the fourth seed (hence their willingness to rest almost everyone Week 17 against the 49ers). Minnesota’s league-best defense, plus-special teams and supporting cast in the passing game, make them favorites against the Rams, Saints and the Panthers, teams for which they were 2-1 this season (and 2-0 at home). The Eagles, on the other hand, are still adjusting to Nick Foles, who has a 25.1 passer rating under pressure and 19.4 percent conversion rate on third down passing in relief of Carson Wentz (81.7 and 47.9 percent, respectively). It’s not difficult to see New Orleans, Carolina or Atlanta, with their plus-defenses and Super Bowl-pedigree quarterbacks, going into Lincoln Financial and upsetting Philadelphia. 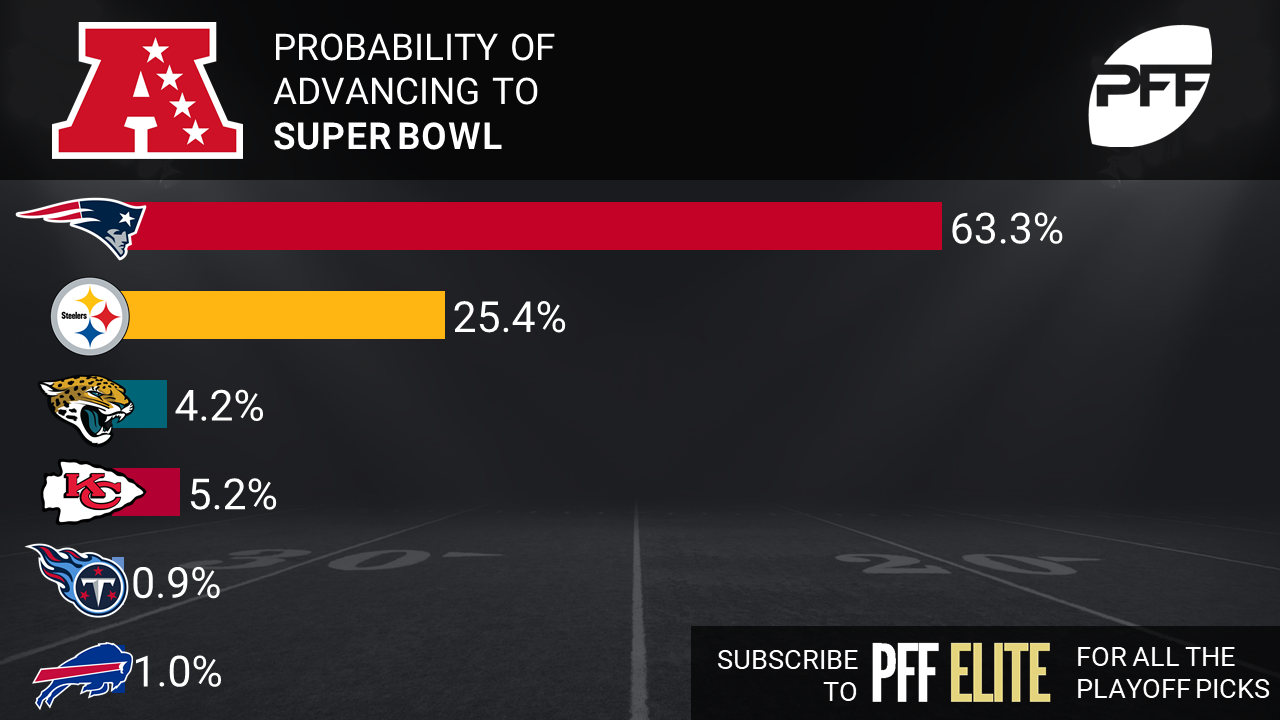 Roughly 60 percent of the simulations had a rematch of the 2017 AFC Championship game, with Pittsburgh returning to New England to face the Patriots. That number is reflected here in how unlikely it is for the other AFC playoff teams to make it. Additionally, despite Pittsburgh’s near-win against the Pats at home a few weeks ago, the Patriots have been the darlings of our metrics all season. While the predicted outcome here is boring, there’s always the NFC… 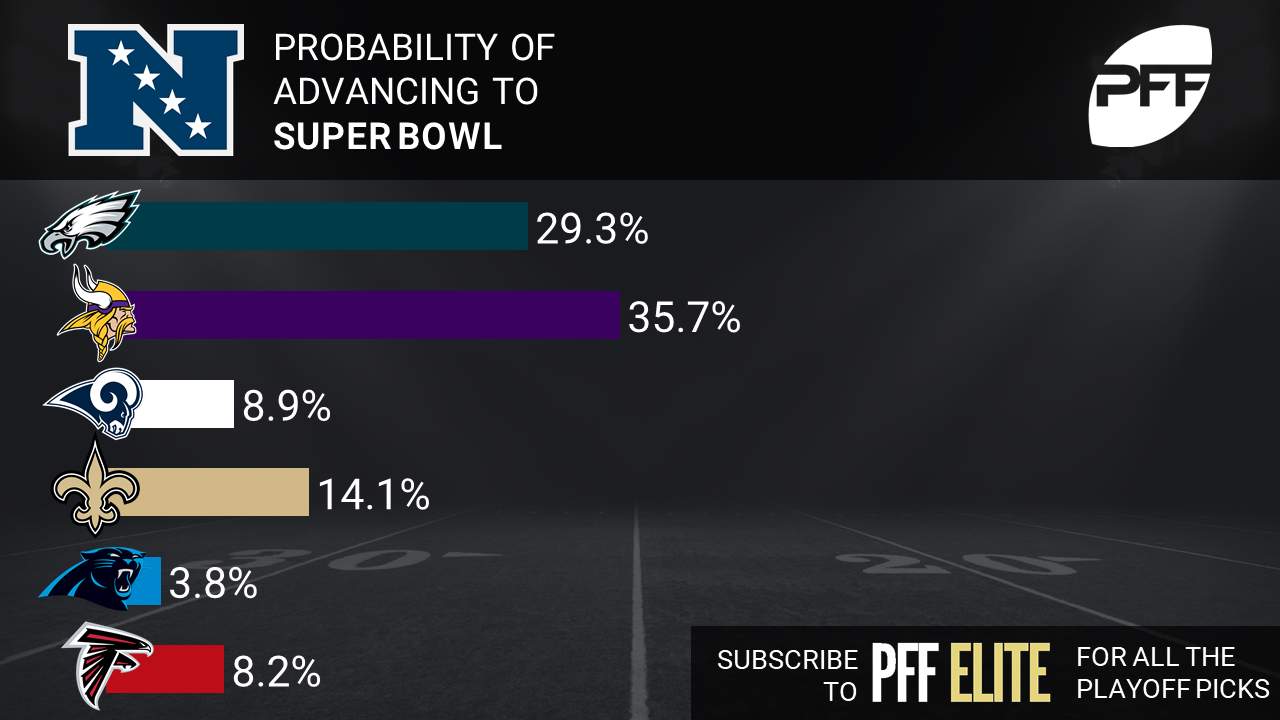 Despite not earning homefield advantage throughout the playoffs, the Vikings are the odds-on favorite to make it to the Super Bowl out of the NFC. However, unlike the AFC, there is more meat on the tail end of the distribution here. Could a team like the Saints, with the league’s most elusive player in Alvin Kamara and his 23 percent broken tackle rate (first), make a run at their second Super Bowl under Sean Payton? Can the Falcons, whom our metrics have loved all season, snap out of their Super Bowl hangover in the red zone and make a run with their stellar quarterback and defense? Can the Rams leverage the league’s best defensive player and Sean McVay’s ability to get the most out of his stable of skill players to give Los Angeles their second Super Bowl berth? 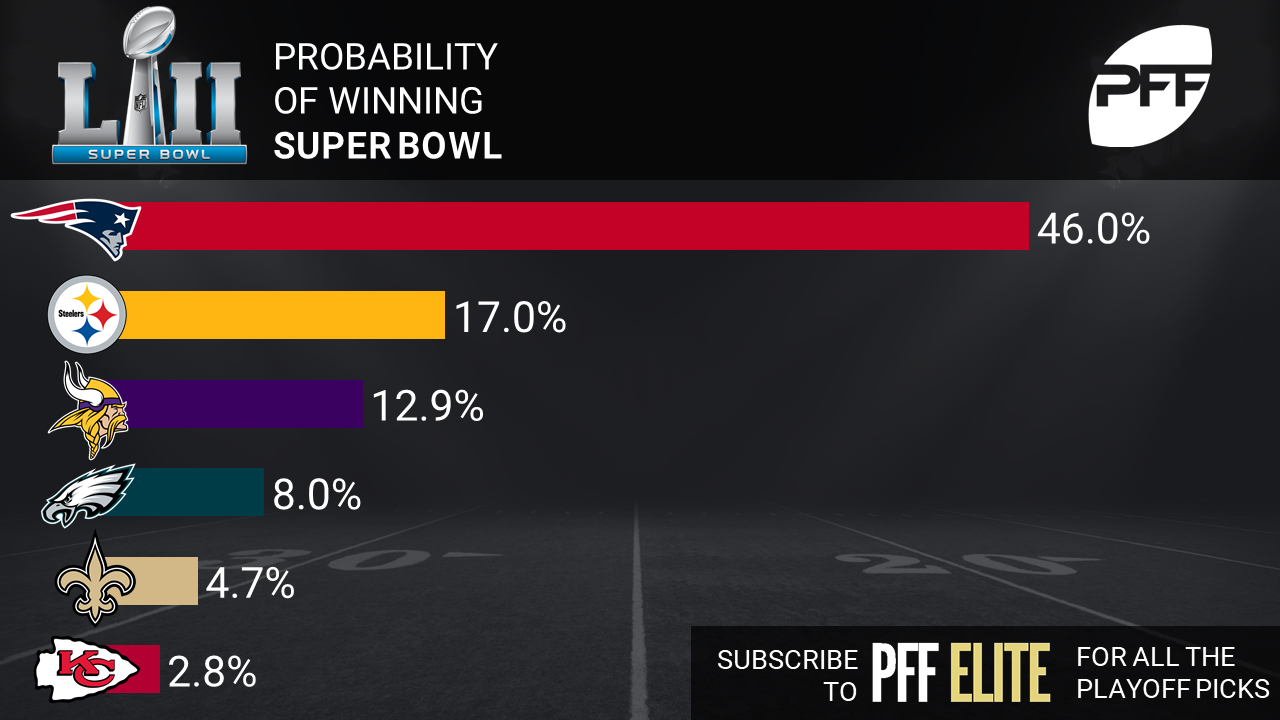 The top-heavy AFC and the relatively-open NFC collide towards what look like pretty good odds for the Patriots. The two mostly-likely teams out of the NFC (Minnesota and Philadelphia) would be clear underdogs against either the Patriots and the Steelers in a Super Bowl matchup at US Bank Stadium, while the dark horses (New Orleans, Atlanta, Los Angeles) have too much of an arduous task to gobble up much more of the remaining probability. So, at roughly a 50-50 proposition, look for Tom and Bill to earn their sixth title before passing the baton of league domination to Jimmy and Kyle (see, George's Savior comment above).