The Baltimore Ravens will get one more draft out of general manager Ozzie Newsome, as he has stated his intents to step aside after this season in 2019. Longtime heir apparent Eric DeCosta will undoubtedly have a pick hand in this year's draft as he's set to take over in all likelihood as he's been with the franchise since 1996. Front office continuity is almost a thing of the past yet DeCosta will ultimately be rewarded for his commitment to the Ravens when Newsome does decide to step down.

That being said, the Ravens view defense as their identity, still, and made use of defensive players on their first four picks last draft. Their defense may be aging, and continuing to count on Terrell Suggs may not be the way to roll, so an edge-rushing replacement plan could be in the cards.

Skill players should be at a premium for the Ravens, even with the new addition of Michael Crabtree at receiver and last year's breakout star at running back in Alex Collins returning. Joe Flacco is signed longterm still, but another replacement plan could also be on the docket for Baltimore in the 2018 NFL Draft if the right guy were to fall.

Using our Wins Above Replacement (WAR – roughly the number of wins a team gets from replacing an off-the-street player with the player of interest) metric as a model, former first-round selections Breshad Perriman and Matt Elam have been their least valuable players since 2013, each costing the team over 2.0 wins the last two seasons. However, a good sign of things possibly turning around, Marlon Humphrey was worth 0.5 WAR last season and Brandon Williams and C.J. Mosley were worth about 4.0 total wins between the two of them on defense. 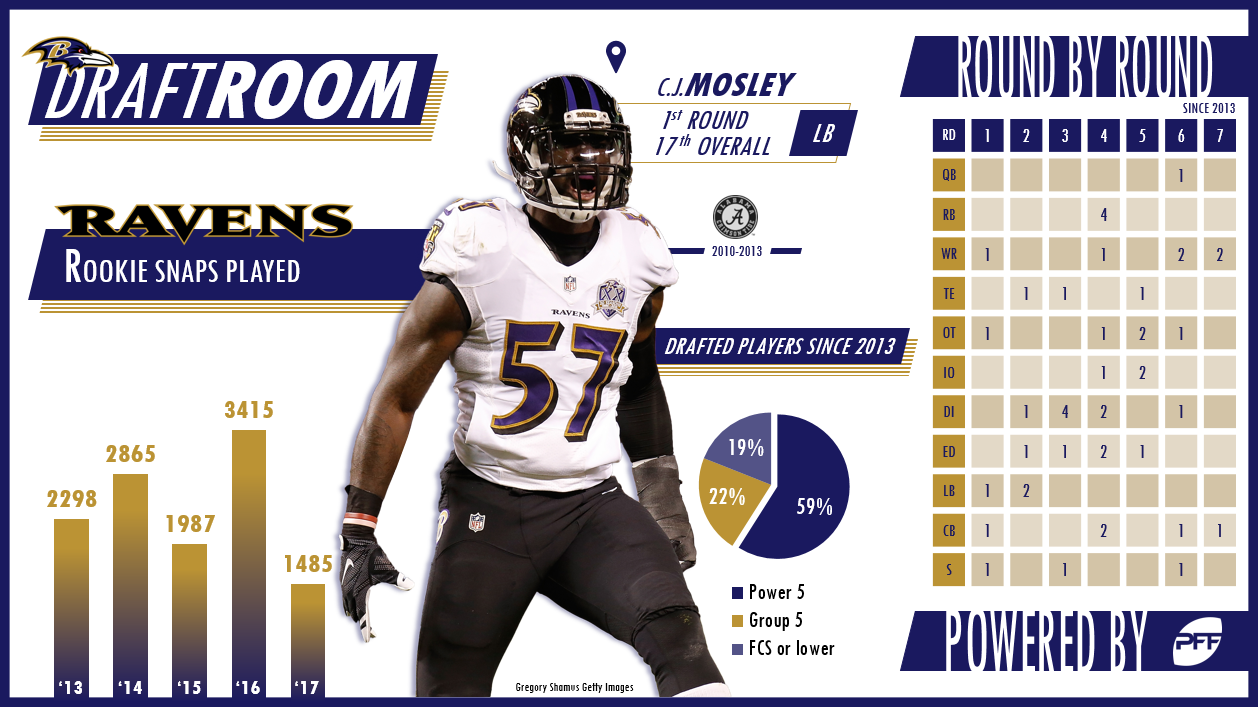 Overall WAR of drafted players for the Ravens: 12th

Earned an 82.7 PFF Grade during his rookie season.

One of the best run defenders in the league, posting an 89.0 PFF grade in that facet a season ago.

Was terrific in 2016 (79.9 PFF grade) before injuring his ACL in OTAs last offseason.

Has earned above a 75.0 PFF grade in each of his first four seasons in the middle of the Ravens’ defense.

Injuries have slowed him, but he was the least-efficient receiver who ran more than 200 routes in 2017 (0.36 yards per route run).

Struggled when he had to play in 2016, allowing 29 total pressures and grading poorly in the run game.

Gas caught only 25-of-50 targets since 2016, dropping five passes in the process.

The 2017 fifth-rounder struggled in limited duty, earning a 39.3 PFF grade as a rookie.

The Cincinnati Bengals coaching staff has historically been heavily involved with the evaluations of draft prospects and have placed a heavy emphasis on college production. Not very active on the trade front in terms of draft picks, the Bengals attempted to fill a need at tackle by trading for Cordy Glenn in an exchange of first-round draft picks from Buffalo (Cincinnati moved down to Pick 21 from Pick 12 by obtaining Glenn). Despite drafting tackles Cedric Ogbuehi and Jake Fisher with their first two picks in 2015, their need for a tackle exists as their 2015 duo has underperformed as neither has put forth a season grade above 67.3 overall.

After the selection of speedy wide receiver John Ross in the first round last year did not pan out like many had thought, the Bengals could use one or more of their early round picks on perimeter weapons as they also have a need at tight end to add depth. They've also lost longtime backup quarterback A.J. McCarron during free agency, therefore a quarterback is not out of the picture to be selected at some point in late April.

Cincinnati received four compensatory draft picks for the 2018 NFL Draft and will now have 11 total selections. Using our Wins Above Replacement (WAR – roughly the number of wins a team gets from replacing an off-the-street player with the player of interest) metric as a model, the aforementioned duo of Ogbuehi and Fisher each saw WAR values in the negative, proving the necessity to trade for Glenn. Running back Giovani Bernard‘s best season in terms of WAR value came as a rookie while on the opposite end of the spectrum, cornerback Darqueze Dennard finally generated >0.5 WAR in 2017, trending in the right direction. 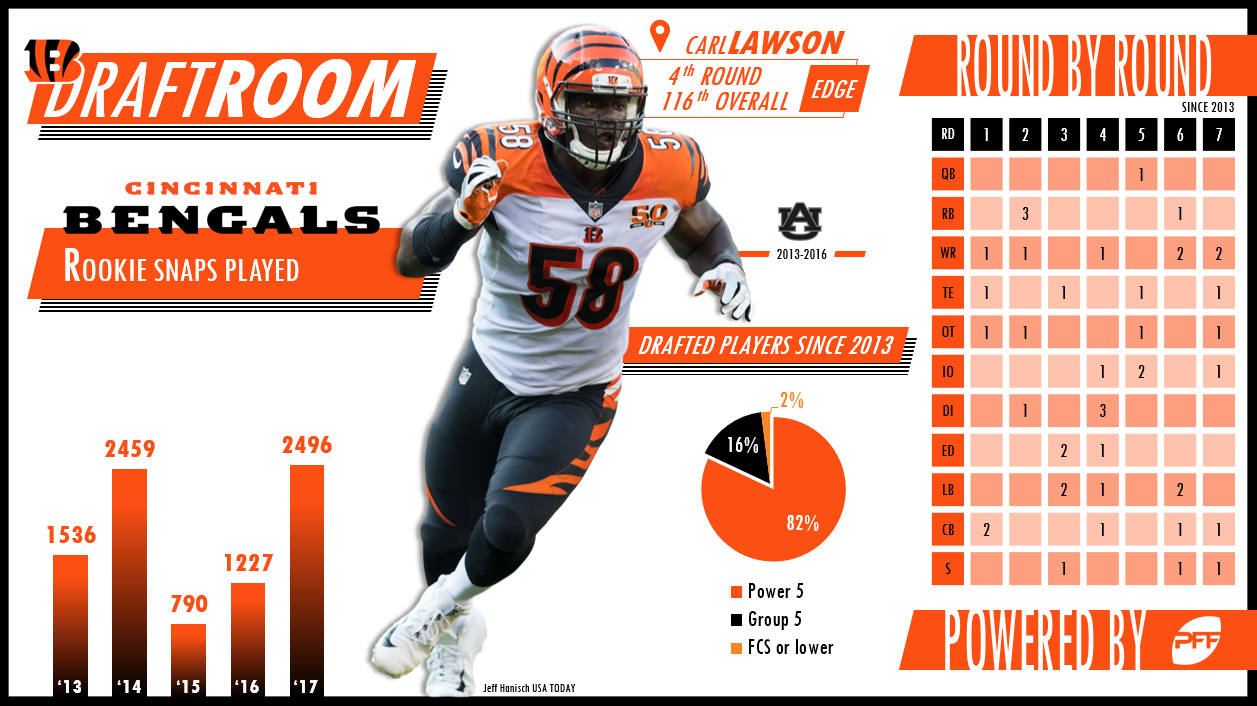 Overall WAR of drafted players for the Bengals: 23rd

Injuries have limited him, but he’s scored 13 touchdowns in 2015 to lead all tight ends.

Versatile back has averaged 4.2 yards per carry and 1.54 yards per route run in his five seasons.

Earned a starting role in 2017 and struggled, earning just a 35.1 grade (fourth-worst among linebackers.

Played over 650 each of the last two seasons, the former first-round pick has allowed 17 sacks, seven hits and 54 hurries in that time.

Earned above a 50.0 PFF grade in just one of his four seasons with the Bengals. Left for Buffalo this offseason.

The Cleveland Browns were left with a massive amount of draft capitol from former general manager Sashi Brown. New GM John Dorsey inherits Houston's first-round pick in addition to the Texans' second-round pick and the Eagles second-round pick from various trades. All the while, they still select first overall in their original slot, and are in prime position to possibly take the next quarterback to lead the Browns franchise. Dorsey comes over after leading the Chiefs' past five drafts and exited Kansas City leaving them with a loaded roster.

The Browns front office has pulled off nine trades over the past two drafts, so look for them to possibly be active movers on Days 1, 2 and 3. They currently have 10 picks in the 2018 NFL Draft, surprisingly lower than the past two seasons (11 in 2017, 14 in 2016). While what they do at pick No. 1 and No. 4, there are many holes across the Browns roster, including a massive one left when future Hall of Fame LT Joe Thomas retired this offseason. Complementing last year's first overall pick Myles Garrett on the edge would also help free up the talented pass-rusher as well as adding to the defensive front-seven that was lacking.

Using our Wins Above Replacement (WAR – roughly the number of wins a team gets from replacing an off-the-street player with the player of interest) metric as a model, only 17 of the Browns last 43 players drafted have put together positive WAR values since 2013. Between the drafted quarterback duo of DeShone Kizer and Johnny Manziel, they combined for -4.5 WAR while tackle Cam Erving cost the team more than 1.0 in WAR value alone. On the flip side, RB Duke Johnson has been very valuable, and worth over 2.0 WAR since he's been drafted. 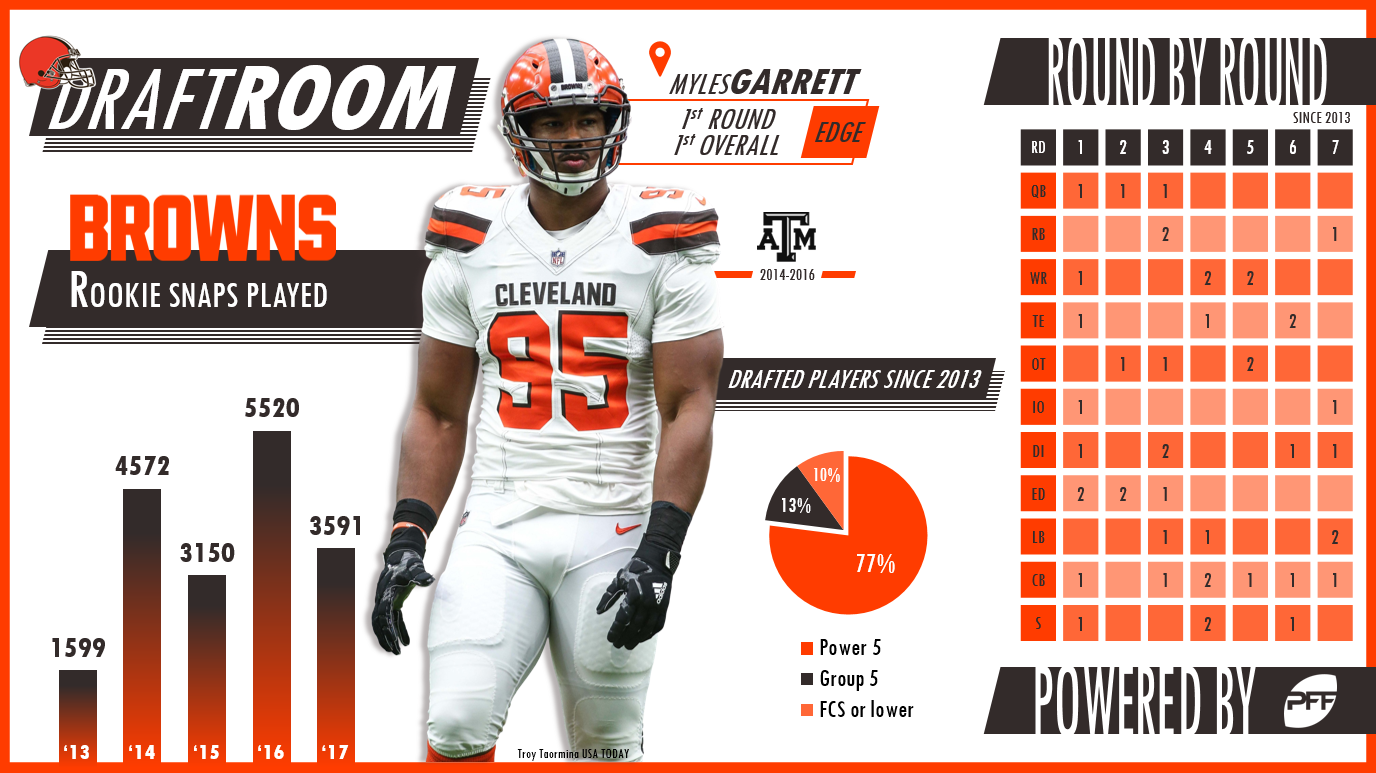 Overall WAR of drafted players for the Browns: 32nd

Has generated over 500 yards receiving and 400 yards after the catch in each of his three seasons, forcing 71 missed tackles in the passing game.

Despite being traded to Jacksonville, Kessler showed promise in Cleveland, as he was the fifth-most-accurate NFL quarterback in 2016.

Before being traded to New England this offseason, he was a cornerstone of the Cleveland defense, grading above 80 the past two seasons.

The least-valuable player in the NFL in terms of WAR in 2017.

Earned the third-worst grade among wide receivers in 2017.

Out of football since 2015 with off-the-field issues.

Traded to Kansas City after two seasons grading below 40.0 in Cleveland.

Earned the seventh-worst grade among wide receivers in 2017.

The Pittsburgh Steelers general manager Kevin Colbert has been in the front office in Pittsburgh since 2000 and GM since 2010, building a roster around the Steelers talented trio on offense. While Big Ben Roethlisberger may be up there in age (as are the entire class of QBs from the 2004 draft), the Steelers made a playoff push and were within a few plays of making it even further last season.

Pittsburgh has shown that they are not afraid to take small school prospects with their most recent selection of Javon Hargrave from South Carolina State, yet 78 percent of their draft picks since 2013 have come from Power-5 schools. Head coach Mike Tomlin likes to draft players with ‘hearts and smarts' he has been quoted as saying and he is one of the most active coaches on the combine and pro day circuits.

Using our Wins Above Replacement (WAR – roughly the number of wins a team gets from replacing an off-the-street player with the player of interest) metric as a model, RB Le'Veon Bell‘s high-water mark in terms of WAR came in 2014 but he almost matched that total a season ago. Sean Davis regressed after positive WAR values in 2016 to negative last year. Rookie breakout star receiver JuJu Smith-Schuster was worth about 0.5 WAR, overcoming the negative worth of Sammie Coates and Markus Wheaton combined. 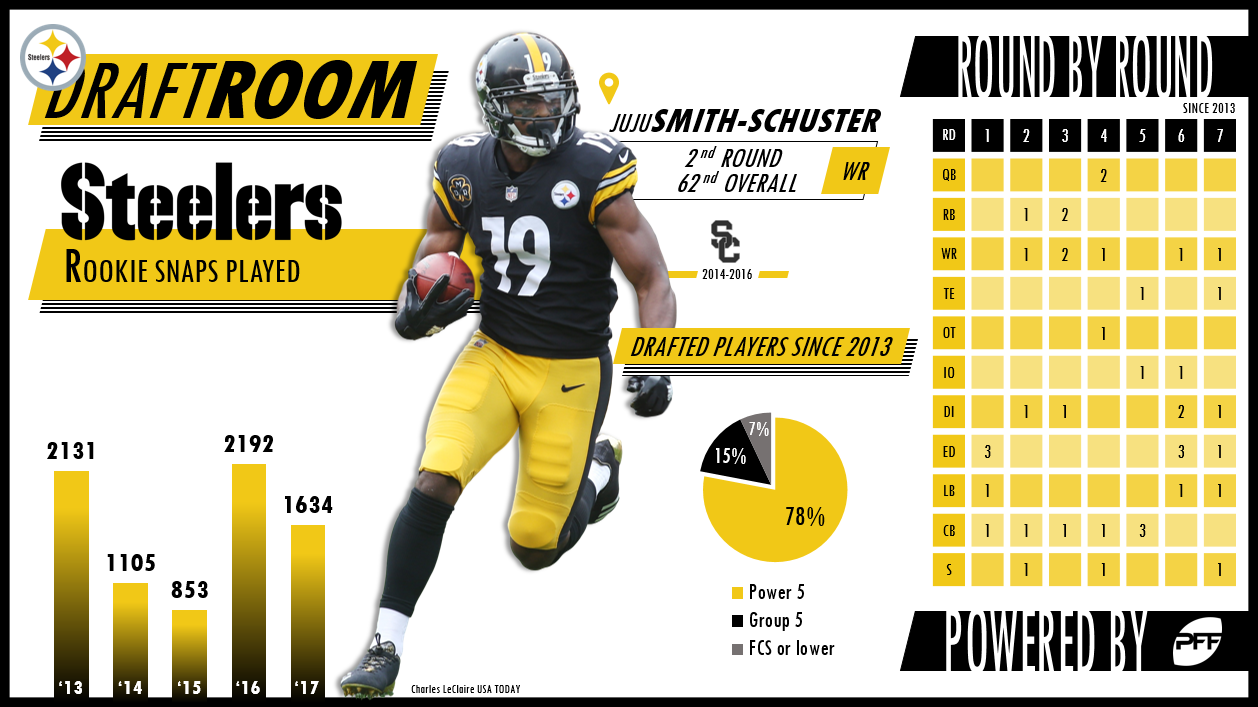 How Have the Steelers’ Draft Classes Stacked Up League Wide 2013-2017?

Overall WAR of drafted players for the Steelers:

One of the league’s best (four seasons with PFF grades above 90.0), but a bit of a dip in efficiency in 2017 has kept the Steelers from committing long term.

Gained almost 1,000 yards receiving as a rookie, earning the 29th best grade among wide receivers in the process.

Was all over the place as a rookie, generating 42 total pressures and 30 stops.

Has earned PFF grades above 80.3 each of the last three seasons.

Has given up over 1000 yards in coverage during his first two seasons in the NFL, missing 19 tackles each season.

Has struggled in both run defense and as a pass rusher, with just 22 sacks and quarterback hits combined through three seasons.

Has just an 85.4 passer rating on 183 career passes in relief of Ben Roethlisberger through three seasons.

Has averaged only 0.87 yards per route run during his career.