Prepare to win all of your redraft leagues, Best Ball drafts and DFS contests with a PFF subscription for the 2020 NFL season. Gain access to expert rankings, projections and analysis in addition to advanced statistics and tools geared to help you dominate in fantasy football.

Here's a breakdown of the tools, charts, articles, etc. available in PFF's EDGE and ELITE subscriptions and how you can best utilize each feature to dominate your fantasy football redraft leagues, Best Ball and DFS.

Premium Content – All EDGE and ELITE subscribers can read any article on PFF.com, including all of the articles tagged with green “Premium Content” badges. Close to 40% of PFF’s article content is locked to EDGE and ELITE subscribers, including a bulk majority of betting content, advanced analysis by PFF’s data scientists (Eric Eager, Kevin Cole, Timo Riske, George Chahrouri) and much more.

PFF's projections are calculated by Eager Eager, Kevin Cole, among others. Their machine-learning algorithm is built upon PFF's exclusive player data, and the projections roll up to their Greenline game picks – more on that in a bit.  The projections work on both a season-long and week-to-week-basis and are customizable to your specific league, whether that be, standard, PPR, 0.5 PPR, IDP, Best Ball or DFS.

The historical fantasy stats date back to the 2007 season, are sortable, exportable to Excel and can be customized by week(s) including the preseason and postseason. This offering includes all of your more basic stats as well as more advanced metrics such as fantasy points per dropback, average depth of target, fantasy points per opportunity, fantasy points per snap, yards after the catch, tackles avoided and more. Available positions include quarterbacks, running backs, wide receivers, tight ends, flex-eligible players, kickers, team defense, linebackers, defensive line and defensive backs.

Advanced Fantasy Football Season-Long League Tools – PFF’s DraftMaster, Season GM and Waiver Wire tools are made available to EDGE and ELITE subscribers. The combination of the three tools help to make you the most prepared player in your fantasy football league for the much-anticipated fantasy football draft, in-season roster/lineup decisions and the frenzy that is the waiver wire.

The Season GM tool offers similar tools but is focused on what you can do during the season and after your draft. After importing your league settings, we'll provide you with customized waiver wire recommendations and player comparisons based on the specific scoring system within your league.

This chart lists each team’s three primary wide receivers and provides their projected cornerback coverage in a given week. It includes height, weight, 40-yard-dash time, targets per route run, fantasy points per route run and grades for all wide receivers and cornerbacks in a given week. In Week 12 of 2017, for instance, we rightfully said Jones had the single best cornerback matchup of the week, running the vast majority of his routes against a weighted combination of Brent Grimes, Robert McClain and Ryan Smith.

PFF's Tight End Matchup Chart and OL/DL Matchup Chart are similar to the WR vs. CB Chart. The Tight End Matchup Chart lets you know which defender will be in primary coverage against your tight end in any given week and how soft or tough that matchup might be. The OL/DL Matchup Chart looks at the advantage or disadvantage an offensive line might have against an opposing defensive line from both a run game (yards before contact) and pass game (pressure rate) perspective. PFF's Fantasy Points Allowed Matchup Chart is exactly what it sounds like, measuring the strength of any given matchup by fantasy points allowed for quarterbacks, running backs, wide receivers and tight ends. 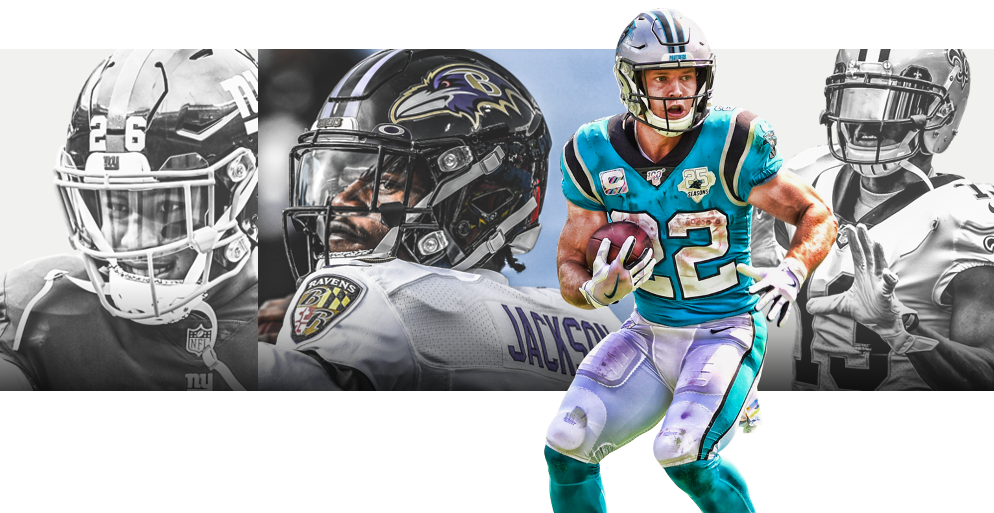 New Fantasy Football Strength of Schedule Tool – PFF’s Fantasy Strength of Schedule (SoS) metric provides a league-wide, season-long view of opponent matchups for each fantasy position. PFF’s version of SoS is the ONLY one available on the market that factors in PFF Player Grades into its methodology to improve its predictive value. This is especially important early in the season to account for roster turnover from the previous year and handling substitutes for injuries week-to-week

PFF grades can also help you navigate matchups on a week-to-week basis, spot regression candidates, or let you know when it’s time to drop (or add or trade for) a specific player.

2020 NFL Draft Guide – All EDGE and ELITE subscribers have access to PFF’s 2020 NFL Draft Guide, which includes over 1,250 pages of grades, advanced stats, NFL player comparisons, Senior Bowl data and analysis on this year’s draft class that you won’t find anywhere else.

Premium Stats 2.0 – And you thought NFL Player Grades for the most recent season were fun… All ELITE subscribers get access to Premium Stats 2.0, a stats database that includes PFF’s advanced stats and player grades for every NFL player with at least one snap played since 2006. ELITE subscribers can also turn back the clocks and view AAF and XFL player grades and advanced stats.

Here are some of the additional metrics we’re offering for players at each position: