The PFF Big Board is our final look at the top 250 players available for the 2018 NFL Draft. While the PFF production grades are used to fuel the process, our analysts are hard at work deciphering each player's strengths and weaknesses while looking for added context for their production through an extensive film study.

Here's a look at the newest iteration of the PFF Draft Board as we head towards the 2018 NFL Draft. 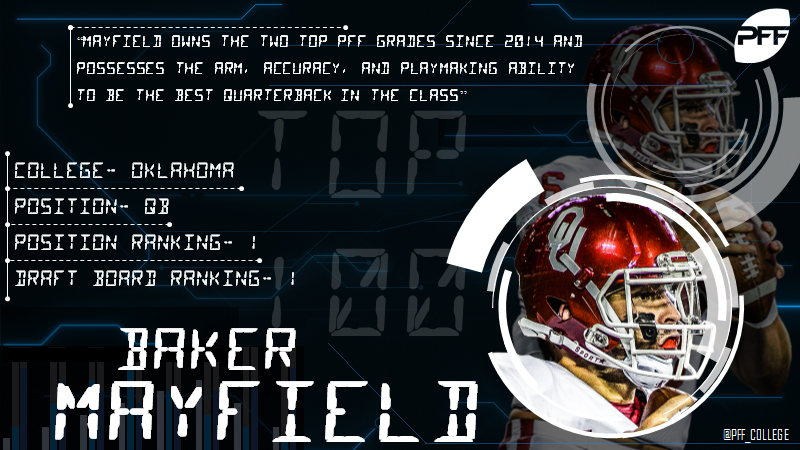 From a pure production standpoint, Mayfield has been in another class, and he has the necessary NFL tools despite questions about his height. He owns the two top PFF grades since 2014 and possesses the arm, accuracy and playmaking ability to be the best quarterback in the class. Mayfield has posted the lowest percentage of negatively graded throws in the nation for two straight years, and he led the draft class in big-time throw percentage last season, showing he was what it takes to create big plays down the field.

Darnold’s high-end play is as good as it gets in the class, as he has next-level feel in the middle of the field and he’s capable of making big plays outside of structure. Those skills showed through with the No. 2 percentage of big-time throws in the draft class last season, though he must improve his ball security after posting the fifth-highest percentage of turnover-worthy plays. Darnold has two years of excellent production at a young age and that should translate to the NFL.

James has all of the tools to become a game-changing playmaker at the next level. His size and athleticism allow him to make plays in coverage against the run and as a pass-rusher. All of James’ skills led to him becoming the nation’s top-graded safety in both 2015 and 2017. He can be a coverage weapon in a two-high safety look or in man coverage against tight ends and slot receivers, while his size allows him to be a force in the run game and to get after the quarterback.

Last year’s top-graded quarterback on intermediate (10-19-yard) throws, Rosen has the zip and touch to make tight-window throws. His aggressiveness allows him to create big-play opportunities all over the field, but it also gets him into trouble with a high percentage of turnover-worthy plays. Rosen graded between 84.0 and 86.3 in all three years of his career at UCLA, all solid grades, though not the dominant performances you’d like to see for a quarterback in the mix to be the first overall pick. 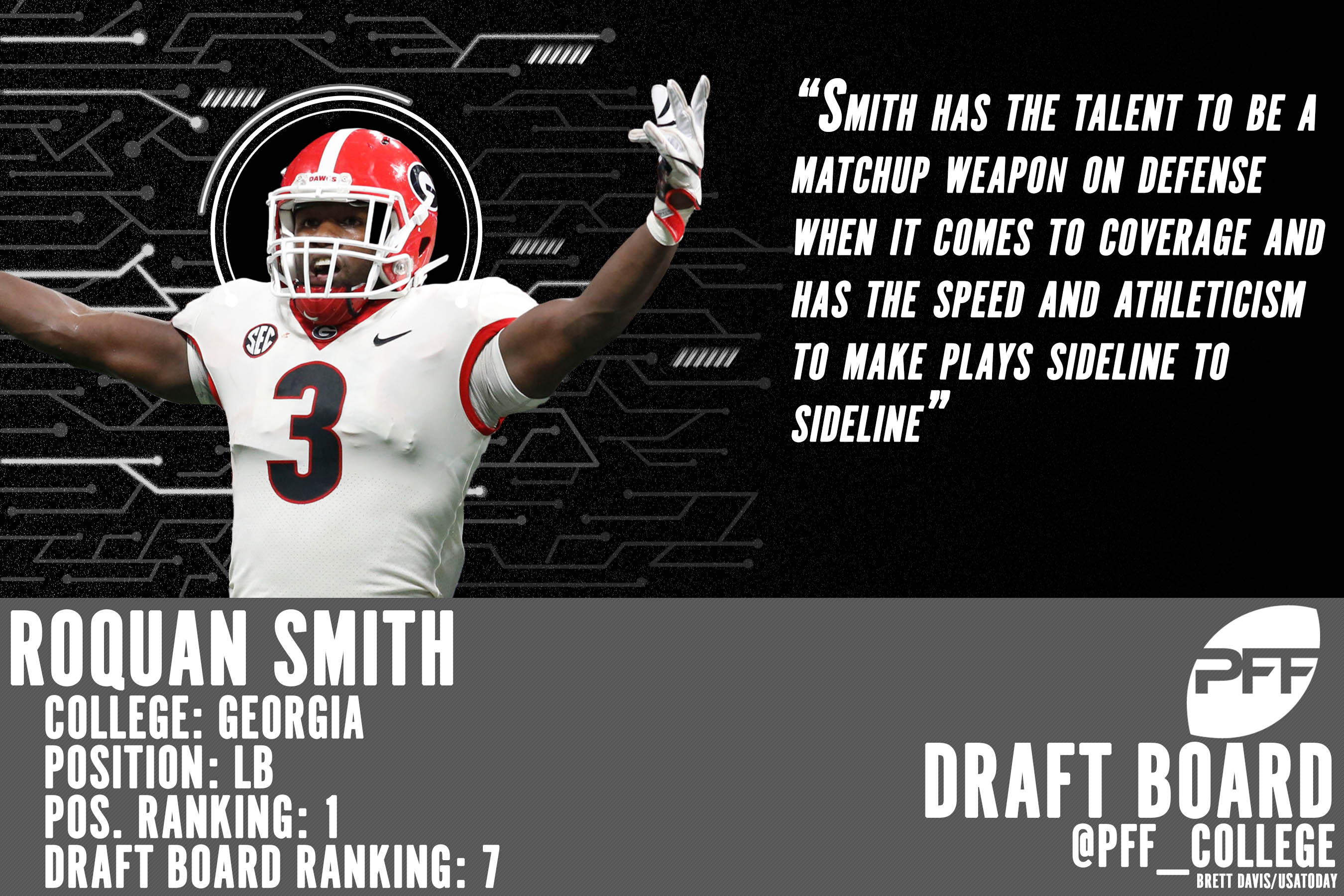 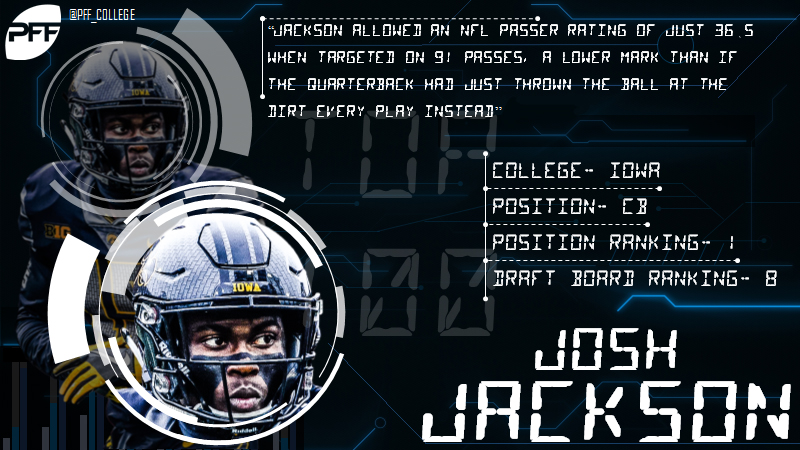 Iowa’s Jackson broke out with a huge season in 2017, not just leading all corners in overall PFF grade in 2017, but he had the highest grade we have seen from any of the corners in this class across their entire college careers. He allowed an NFL passer rating of just 36.5 when targeted on 91 passes, a lower mark than if the quarterback had just thrown the ball at the dirt every play instead. He is also extremely young at the position, having only moved to corner in 2015, so his potential is sky high.

Ohio State has been a cornerback factory over the past few seasons, and Ward is the latest player to hit the NFL from that secondary. He has elite athleticism and quickness, with all the tools to be a top cover guy at the next level. He has extensive experience playing man coverage within that defense, but actually flashed some really excellent plays in zone coverage, so shouldn’t be a scheme-specific player. He allowed just 35.1 percent of passes thrown his way to be caught in 2017.

Fitzpatrick has elite play and traits, but his NFL question is what position he will play at the next level. The position with the most value to NFL teams is perimeter corner, but he played just 13 snaps there in 2017 and how he will perform there at the next level is almost pure speculation. He has been a versatile and productive star in the Alabama defense at multiple positions and should have the athleticism to project outside at the next level, but that projection is an unknown variable. 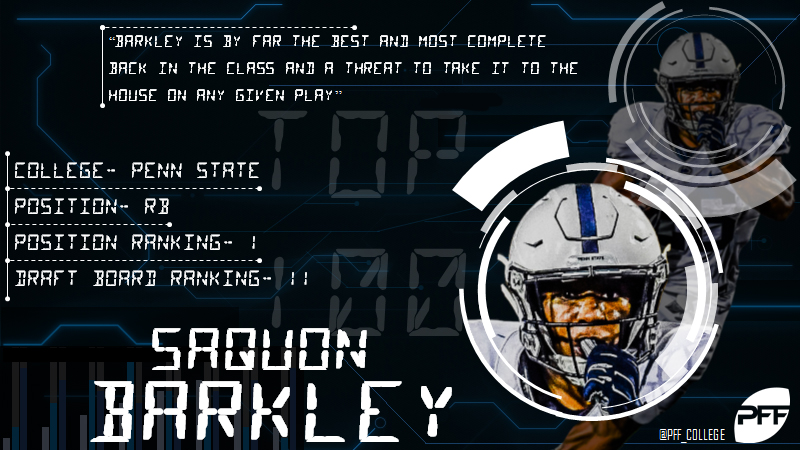 One of the most dynamic receivers at the running back position enters a league where passing has never been more important. Barkley is by far the best and most complete back in this class and a threat to take it to the house on any given play. He ranked fifth in 2017 among all FBS backs with a breakaway percentage of 56.8. His only real negative is a tendency to pass up three yards in tight confines to try and break outside for a bigger gain, but that is more than offset by the good he can do. 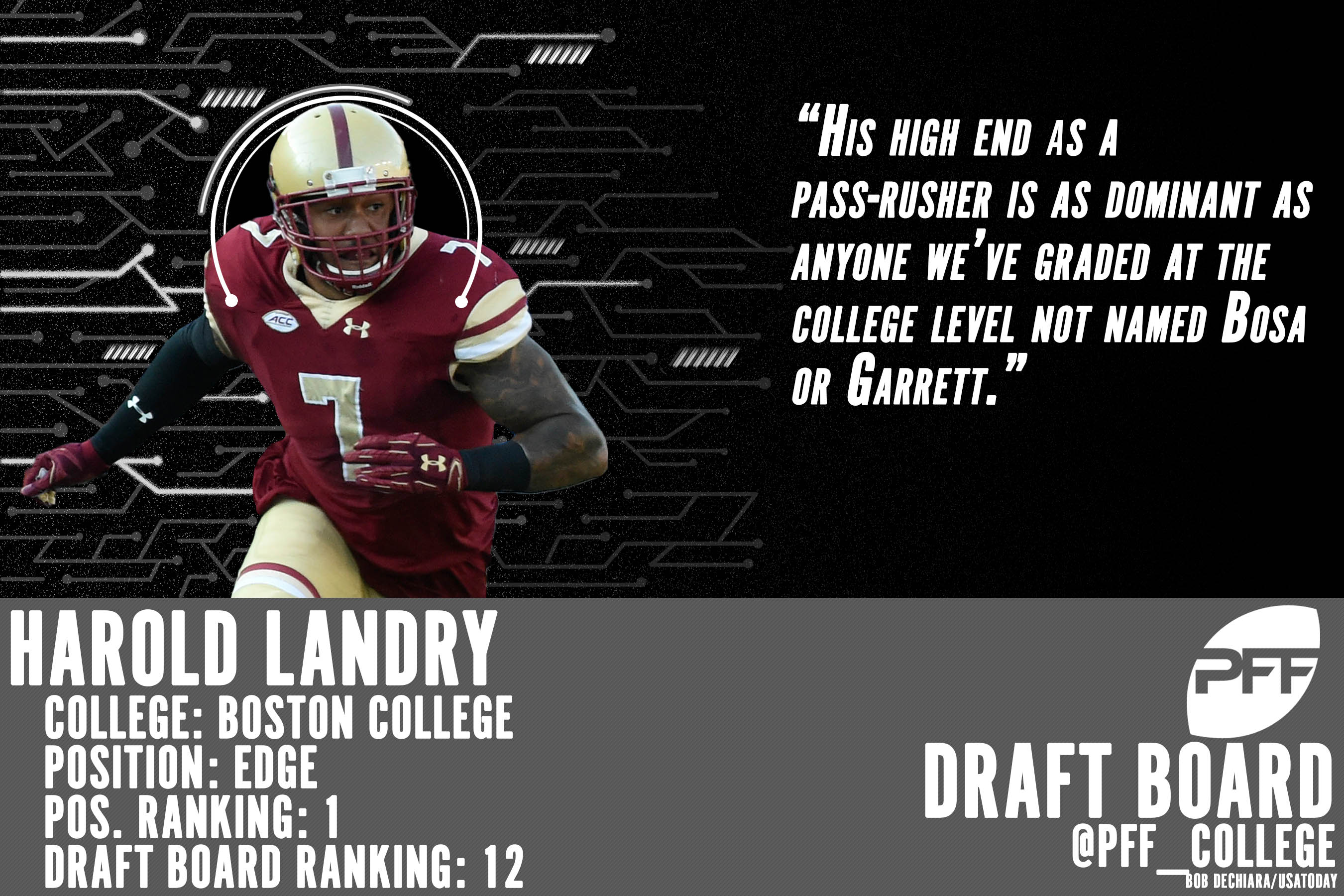 It’s all about setting proper expectations for Jackson who has incredible athleticism and a good arm that is capable of making NFL throws, yet inconsistent when it comes to down-to-down accuracy. That combination can be used to create an explosive offensive system as Jackson can drive the ball down the field and create big plays with his legs, though he may never be a classic, accurate passer who is counted upon to throw the ball 40 times per game. With the right offensive coordinator, Jackson has a chance to be a dynamic playmaker.

To see the real Alexander, you need to go back to his 2016 tape, because injury marred his 2017 season. He has incredible short area quickness and the ability to break on the ball and contest at the catch point underneath. Long speed may be an issue, and even in that 2016 season he surrendered six touchdowns in coverage, but his ability to make plays underneath is at an elite level, and should find him a role as a slot corner at the minimum early.

Ridley has excellent speed that shows up down the field and in his route-running, making him one of the more dynamic options in the class. His production was limited in Alabama’s scheme, but he averaged 45.1 yards on his deep catches, showing what he’s capable at the next level. His age is a question mark as he’ll be 23 on opening day, but his downfield ability pushes him toward the top of the class.

Few receivers can match Washington’s production over the last few years as he’s been one of the best downfield threats in the class. He led the nation with 815 deep receiving yards last season and his ability to maintain his speed in and out of his breaks makes him a threat at all levels. He tacked on a dominant Senior Bowl week to his productive career and Washington has the skills to beat press coverage and win on the outside.

With three straight years grading at 90.0-plus, Rudolph is going overlooked in this draft class. He was certainly aided by weak Big 12 defenses and a loaded group of receivers, but Rudolph has a good feel for throwing outside the numbers and he’s improved his ability to throw tight-window passes in between the numbers. Last season, he had the second-best grade in the draft class both from a clean pocket and when pressured, and Rudolph should at least be in the conversation when it comes to first-round hopefuls in the draft class.