The college football season seemingly came and went this past year. With it, some dominating performances and some standout athletes that made big improvements from year's past and pumped their draft stock. At Pro Football Focus, we watch every player, on every play of every game, and with have an updated list of names to watch out for as we progress ever closer to the 2018 NFL Draft. 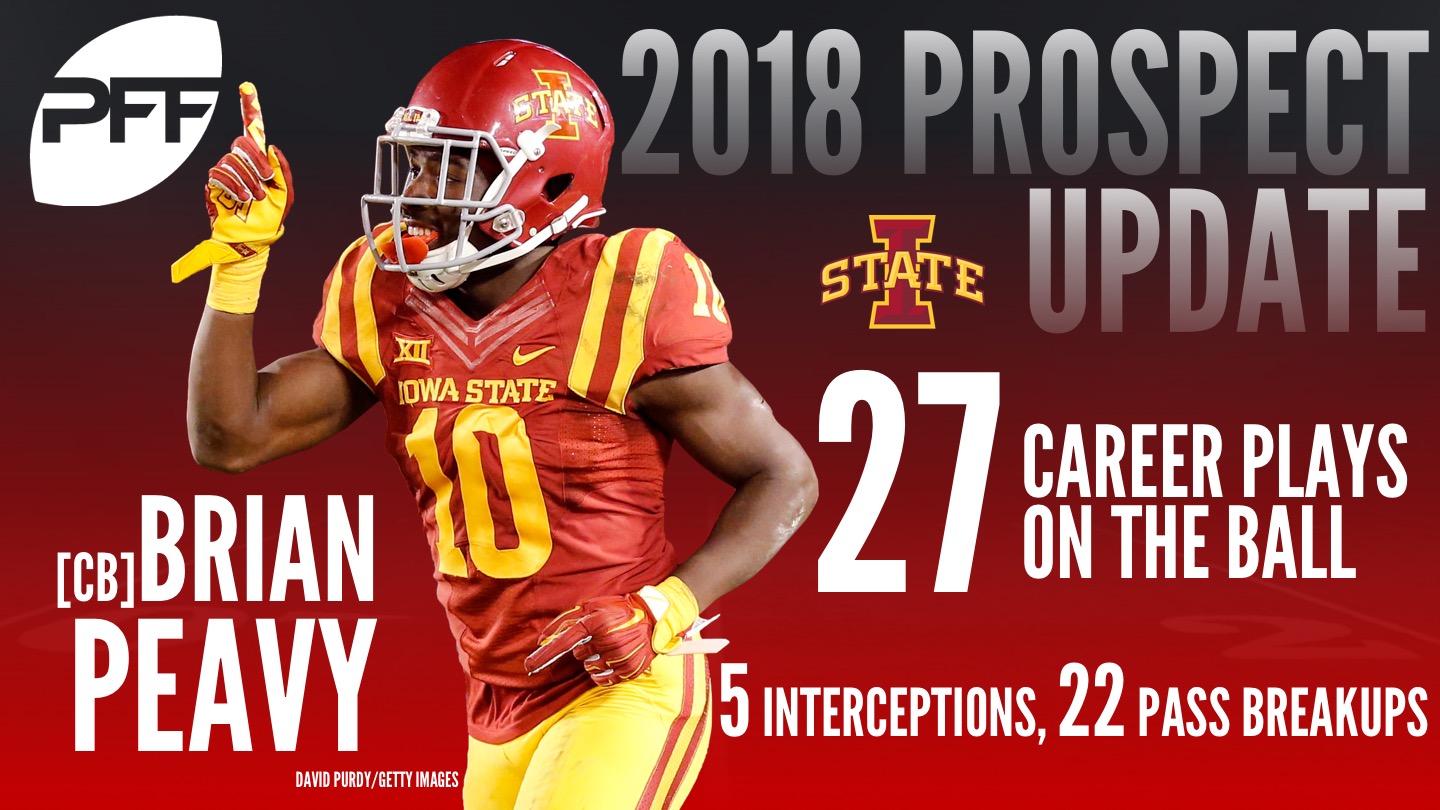 Peavy has graded well in coverage each of the past three seasons, but 2017 was easily his most complete campaign. After a rough showing against rival Iowa in Week 2 this year, he virtually locked down Big-12 opponents, as he gave up less than 20 yards receiving into his coverage in 7-of-10 conference games, and never more than 40. He notched two picks and eight breakups this season, and also earned a solid 80.1 run defense grade. Because of his listed size of 5-foot-9, 190-pounds, he is unlikely to hear his name called in the first round, but his coverage ability and all-around consistency is sure to intrigue NFL teams. — @PFF_Josh 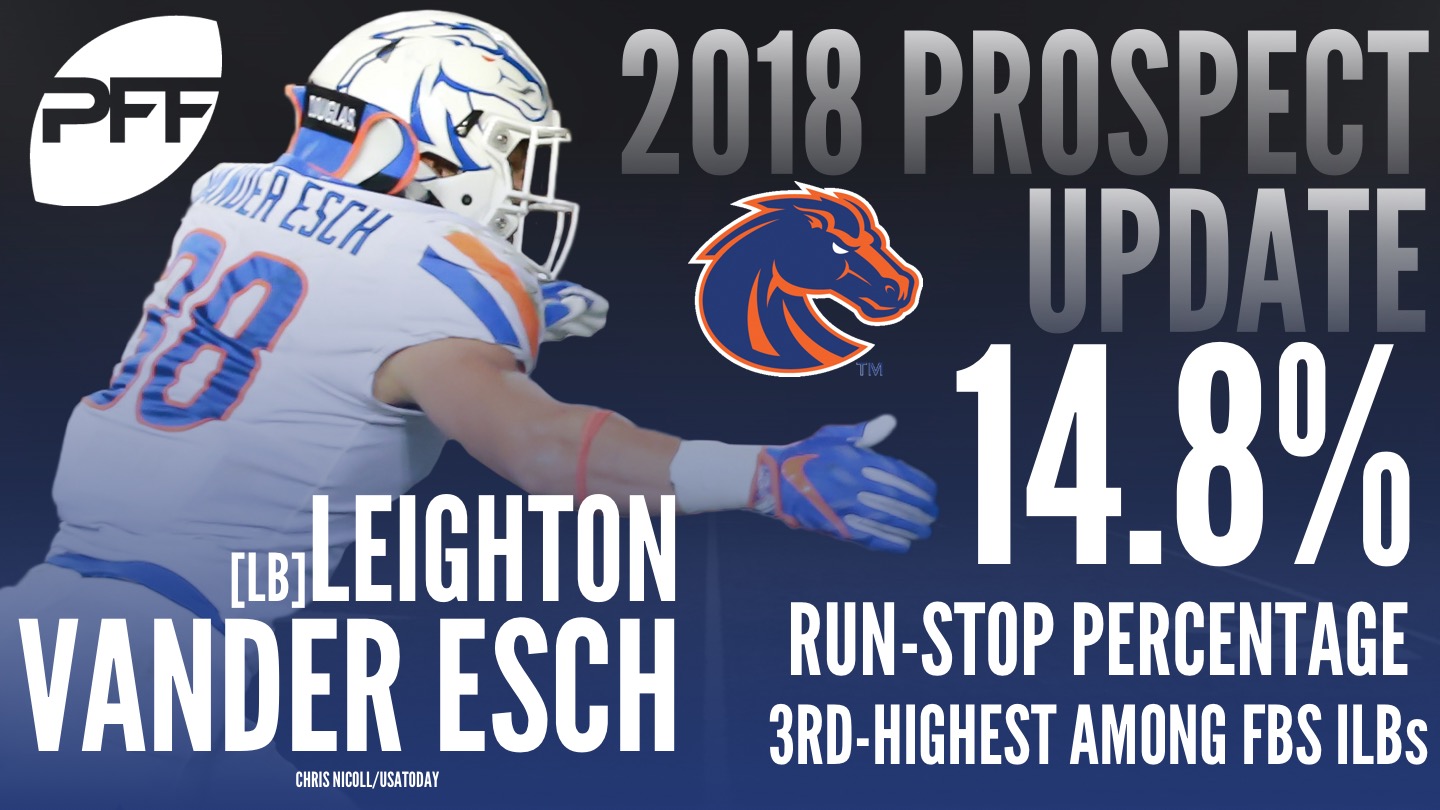 Vander Esch is a three-tool linebacker, of which was never more evident than in his monster bowl game performance against Oregon. That game saw him record a sack and a QB hit in addition to seven defensive stops and only surrendered three yards in coverage on five targets. After the game, Vander Esch declared early for the draft and is an intriguing prospect, as he has ideal size at 6-foot-3, 240-pounds for the NFL and can be used in a variety of ways by his next defensive coordinator. Vander Esch finished the season grading positively as a pass-rusher, run defender and in coverage but was at his best against the run. He had 46 run stops and his run-stop percentage of 14.8 ranks No. 3 among all FBS draft-eligible inside linebackers. — @PFF_Jordan 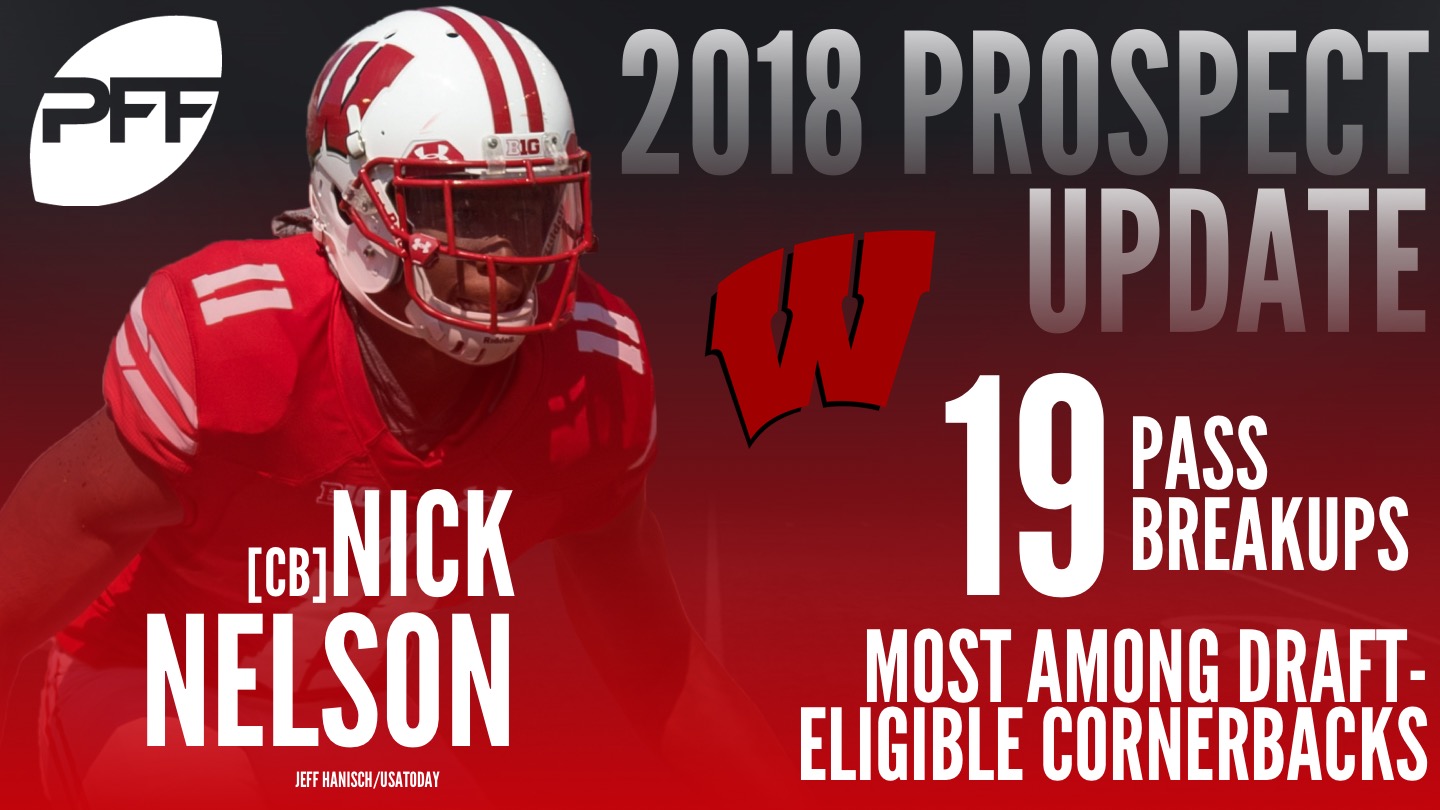 Nelson didn’t tally any interceptions this year, but his 19 pass breakups and 26 total forced incompletions lead all draft prospects this year. He possesses an excellent combination of recovery athleticism and strength at the point of attack, aided by his 5-feet-11 and 208 pounds frame, and clearly has a knack for closing effectively on the ball. He allowed just 38.8 percent of throws into his coverage to be completed this year, which ranks fourth among cornerback prospects targeted at least 50 times in 2017. — @PFF_Josh 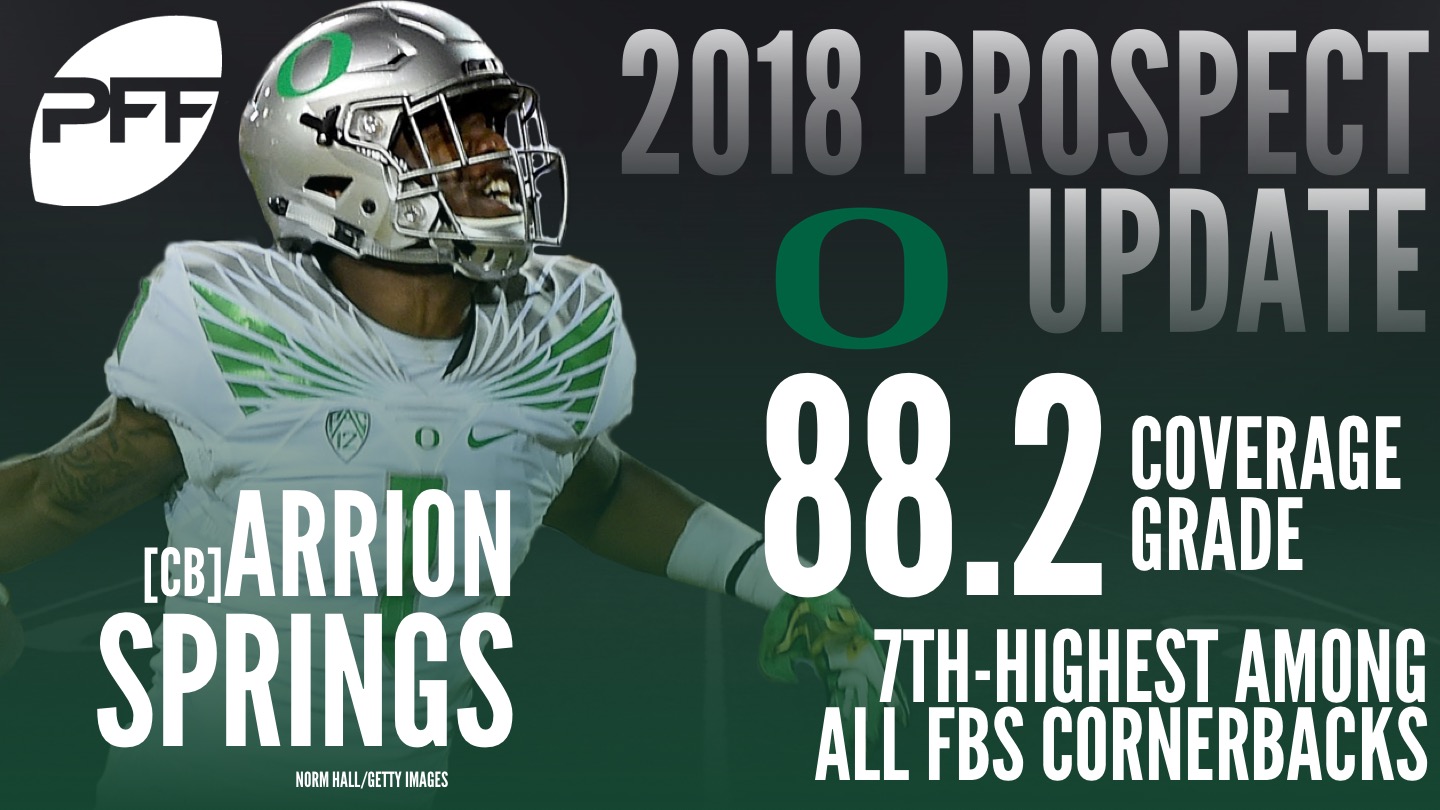 Springs is 5-foot-11, so he doesn’t possess ideal length for a high cornerback pick but he was a highly effective coverage player all season long for the Ducks. Springs’ 88.2 coverage grade ranks No. 7 among all FBS cornerbacks with more than 100 snaps in coverage and he excelled this year at getting his hands on passes. While he only had one interception in 2017, he did manage an eye-popping 15 pass breakups which is third-most among all FBS corners in 2017. — @PFF_Jordan

*Editor's Note: This article was originally published on November 30, 2017. Upon the season's culmination, we will update this list with several players to keep your eyes on as we watch more and more film, with our eyes on the 2018 NFL Draft.

The 2017 college football season is but a mere few games away from finishing it's regular season. Players and teams have grabbed headlines across the country from Oklahoma's Baker Mayfield and his stellar season to late-season upsets, 2017 has been a treat for college football fans alike.

With the end of the season near, PFF shifts the focus to the NFL Draft. While there are specific players who will be talked about ad nauseam, and other players you may already know about, utilizing our extensive PFF data and our PFF Draft Team's keen eyes, we're here to highlight some of those lesser-known players that you may not have heard about, but can definitely make waves in the 2018 NFL Draft.

Penny plays in a RB-friendly system at San Diego State and has produced at an elite level with little national fanfare. Penny has forced 74 missed tackles – which leads all draft-eligible running backs – on his 277 rushing attempts. His elusive rating of 109.7 ranks No. 2 among draft-eligible running backs behind only Stanford’s Bryce Love. Penny also has breakaway speed in addition to his “make-you-miss” moves and his 31 runs of 15 yards or more ties him for first in the draft class with Love. Penny’s game-breaking speed is also evident by his punt return touchdown and two kickoff return touchdowns this season. — @PFF_Jordan 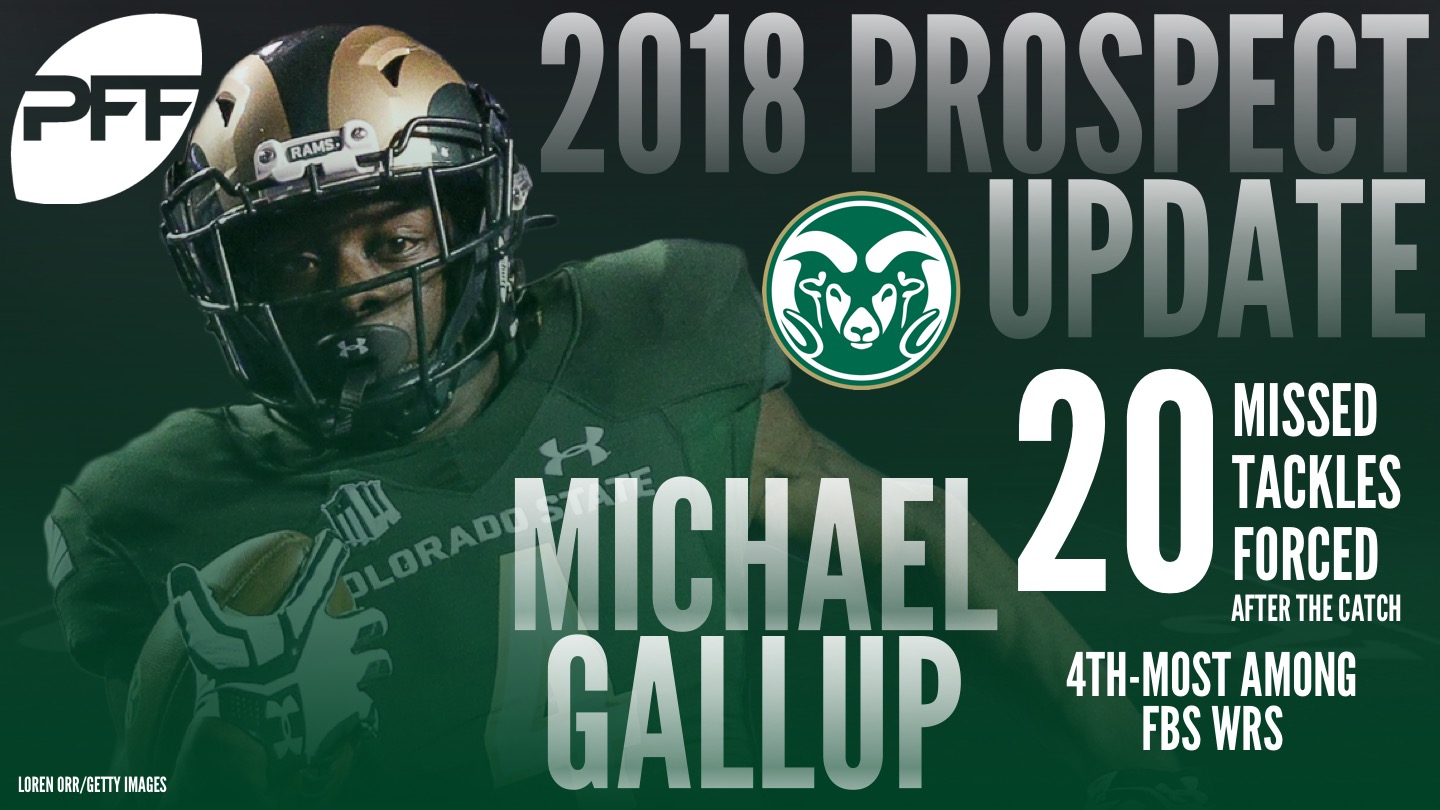 The nation’s top-graded wide receiver at 92.0, Gallup can win at every level with his size, speed and overall athleticism. He’s tied for fourth in the nation with 20 forced missed tackles and he complements his after-the-catch ability with downfield ball skills. This is the second straight year of top-notch production from Gallup as he ranked second in the nation with 4.51 yards per route last season and his 3.47 mark is currently tied for eighth. The wide receiver class still has many question marks at the top, but Gallup is one to watch as we get closer to April. — @PFF_Steve

Subscribe to PFF Edge to read the rest of the top names to know including Justin Lawler, Darius Phillips and much more with your PFF Edge package.